100 Years After World War I, The National Memorial In Washington Remains Unfinished. Here’s Why

Nov. 11 marks the 100th anniversary of the armistice that ended World War I, but the national monument in Washington,... 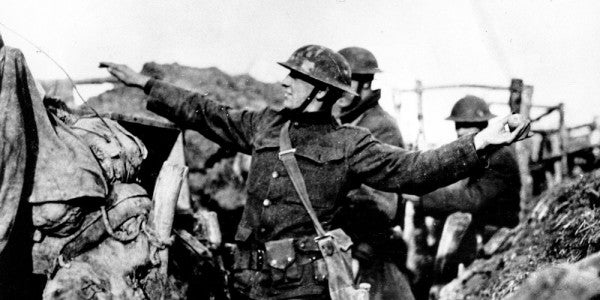 Nov. 11 marks the 100th anniversary of the armistice that ended World War I, but the national monument in Washington, D.C., that Congress authorized in 2014 is still just an artist’s concept that still needs money to become a reality.

The U.S. Commission of Fine Arts approved fundraising for the a national World War I monument last year, said Dan Dayton, executive director of The United States World War I Centennial Commission. So far, donors have pledged about half of the $42 million for its construction, which is expected to be completed in November 2021 – 100 years after the opening of the Tomb of the Unknown Soldier at Arlington National Cemetery, he said.

“It’s not easy, but it’s getting there nicely,” Dayton told Task & Purpose.

The First World War launched America’s entry on to the world stage as a military and financial power; it lit the fuze that blew for World War II; and it fractured the world, leavingconflicts that persist to this day, including the turmoil in the Middle East. And in many ways, it never really ended: the Sykes–Picot Agreement of 1916 between the British and French turned Syria and Iraq into sectarian time bombs.

But the quest to honor the more than 2 million Doughboys who went “over there” faces an a more existential challenge than mere fundraising: While World War II is revered in the United States, the First World War is mostly forgotten in the national consciousness. When Frank Buckles, the last American World War I veteran, died in 2011, lawmakers refused to let him lie in state at the U.S. Capitol.

Even though it is often overshadowed by World War II in the United States, the Great War remains in many ways the seminal conflict of the 20th Century, Dayton told Task & Purpose.

“We like to refer World War I as ‘the war that changed the world,’” he said. “Part of our mission is to tell the American people how that happened and why feel that’s the case. Clearly, when you look at the facts, it is the case. It was the beginning of the American century.”

In fact, a miniature version of the Bronze sculpture that will adorn the national World War I monument will be displayed this fall at The National September 11 Memorial and Museum in New York, Dayton said.

“We showed them some pictures of it in the context of another meeting we were having there, and they got it immediately,” Dayton said. “They said: ‘You can draw a line from World War I to 9/11. We want to put this maquette on display in our museum.’”

The brutality of the Doughboys’ wartime experience could help to explain the national amnesia about World War I, Dayton said. The war saw the introduction of chemical and nerve agents which have since been banned by international treaty. For years, generals would order masses of troops to charge batteries machine guns head-on, an onslaught that cut down attackers like a scythe. Millions of shells were fired in a single battle, giving rise to “shell shock” as a feature of modern warfare.

“There’s no war that’s good in any sense, but this one was particularly horrible,” Dayton said. “Trench warfare was horrible. The weapons of war that were being developed in the First World War included chemicals and mustard gas and they were fighting in mud up to their knees in many accounts. Tanks were first used, so we were mechanizing war.”

The brutality of the First World War had an unusual effect: When the Doughboys came home, they wanted to forget about the war entirely and return to their farms, businesses, and families, so that they could carry on with their lives. According to Dayton, Americans are only now rediscovering World War I, especially in small towns, where people are surprised to learn they already have monuments to the Great War (the commission has provided communities with $200,000 to help restore such monuments in 100 cities around the country)

“There is a World War I memorial in almost every town and village and the country – and in many cases, it’s the one you drive by every day and never knew what it was,” Dayton said.

The First World War was supposed to end conflict forever and make the world safe for democracy. It ended up doing neither. The Treaty of Versailles in 1919 created so much resentment in Germany that an insignificant former corporal named Adolf Hitler was able to convince millions that he was his nation’s Messiah.

Perhaps the best summation of the conflict’s legacy comes from a 1964 CBS documentary about the Great War. In it, U.S. troops in World War II preparing to deploy to the dour narration of Robert Ryan: “Long after this, Doughboys’ sons and their sons will still be searching for a greater wisdom, something beyond weapons – still searching for the security that was lost in the cataclysm of World War I.”

One hundred years after the armistice, the search goes on in Afghanistan, Syria, and elsewhere. And while the world’s ability to remember earth-shattering conflicts in monuments and memorials has only grown, our ability to end them died in those damn trenches.