Editor’s Note: The following story highlights veterans who work at Prudential. Committed to filling its ranks with talented members of... 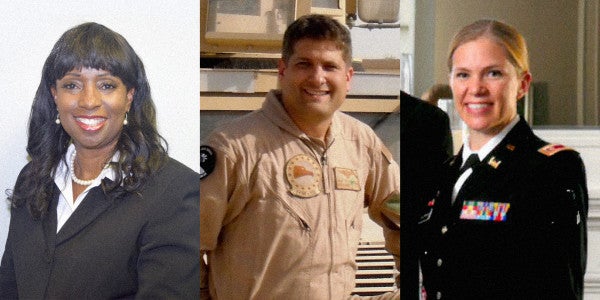 Editor’s Note: The following story highlights veterans who work at Prudential. Committed to filling its ranks with talented members of the military community, Prudential is a Hirepurpose client. Learn more here.

When people think ofPrudential, they usually think of insurance, investments, and retirement. But for the military veterans who work as financial professionals at Prudential Advisors, the first thing that comes to mind is family. That’s because the company has become as much a part of their lives as the service once was, and Prudential and their colleagues share many of the same values that are espoused by the military.

Amy FullenKamp, 36, is an officer in the Ohio Army National Guard, and has been a financial advisor with Prudential for two years. She joined the company after meeting a financial advisor and learning about the company’s Gemini mentorship program. This formal program provides newly appointed financial professionals with career development and coaching opportunities from qualified, leading financial professionals. “Prudential really cares for people,” she says in reference to the program, which she believes is especially helpful to veterans, but is available to all employees.

Prudential was founded on the belief that financial security should be within everyone’s reach. What’s more, Prudential has a longstanding commitment to our military. When it comes to veterans, FullenKamp says that Prudential goes the extra mile. Prudential’s Veteran Initiatives group and VetNet community provides assistance and resources to all of the company’s veterans. “I haven’t yet reached the depths of the resources available to me,” she says.

After 23 years in the Navy, Robert Kinney, 47, has now spent four years as a financial professional with Prudential, and he echoes FullenKamp’s statements. “People at Prudential have helped ensure that I’m successful, even when there’s nothing in it for them,” he says of the company. That commitment to helping veterans — and all employees — achieve success is part of the company’s culture. “The culture here isn’t only top-down, but also bottom-up,” he explains. Everyone, according to Kinney, wants to help people.

Another reason for Robert’s success — and Prudential’s — is that the company views people as members of the team, much like in the military. “Team isn’t solely a military concept,” Kinney says, “but not all companies have it in their vision.”

“The military becomes your family, and Prudential shares a lot of the same traits of accountability and camaraderie,” agrees Eva Osborne, another financial professional with the firm.

Osborne, 58, is a Navy veteran who has been with Prudential for two years. When she left the military in the mid-1990s as an electronics technician, finding a job in the civilian world was not an easy transition. Although she was well trained in the military, the terminology was quite different. She had to learn how to communicate her skills in civilian terms. At that time there was not a lot of respect for military training even though she also had a bachelor's degree, she says. “It was very hard to find a job, and at times, depressing.”

Eventually, Osborne found success in the civilian workforce as a Senior IT Business Analyst. She attributes her current success in her role at Prudential to the effort the company puts into educating their employees. “I love that Prudential gives you a support system to help you find your place,” she says. “It’s not all about the numbers for them, it’s about people, and helping people – whether that’s employees, customers, or clients – it is the most important thing.”

According to these vets, providing the guidance and expertise to enable people to achieve their financial goals is at the core of the company’s values. “This job isn’t for everyone,” Kinney says. “You have to want to help people. You won’t succeed here if you’re just thinking about yourself and money.”

That desire to help is a big part of what FullenKamp loves about her job with Prudential. As a member of the National Guard, FullenKamp still commands a team of soldiers, and she uses what she learns at Prudential to help guide them in their own financial endeavors. “I get to take conversations with my soldiers one step further and help them better their own financial situations,” she says.

The same drive to help that makes Prudential a great company for veterans is also what makes veterans succeed within the company.

“Veterans know how to commit to work without being constantly rewarded,” Osborne tells us. “For veterans, it’s not about the pay. It’s about doing the right thing and making a difference in people’s lives.”

“Veterans don’t sit around waiting for someone to tell us what to do,” FullenKamp says. “We have the ability to triage scenarios and make decisions. And Prudential gives us the autonomy to do that.”

For anyone looking to follow in the footsteps of these vets, several things can improve your chances of success.

First, as Osborne says, “You have to learn how to be a civilian,” in much the same way you learned how to be a soldier, sailor, or Marine. Then, you should find a mentor. “In the military, your superior would be a natural mentor, but that’s not always the case in the civilian world,” she explains.

For FullenKamp, finding a mentor means going out and interviewing other financial advisors and finding one who you can work with, someone who shares your values and drive. “Having a mentor has put me head and shoulders above other advisors ,” she says. And she found her mentor by going out and looking for one.

You also have to be willing to put in the work. Once you figure out what you want to do, you have to figure out how to do it. In many instances, Osborne says, that will involve going back to school and getting another certification to be able to compete with others in the civilian workforce. You also have to be willing to be the new kid, and accept training and advice from others.

“You have to always be in the mode to learn something new,” Osborne explains. “I’m always looking up new things to become better at my job. Learning is never-ending.”

Most importantly, though, Kinney says, is to “be open to different ideas and different types of jobs.” Be willing to go outside of your comfort zone, even — or especially — if it makes you nervous. There are more opportunities available to you if you’re willing to try something new.

“Changing jobs is scary for anyone,” Kinney says. So, whether you’ve been in the civilian workforce before or are retiring from the military after a full career in the armed forces, you’re the same as anyone else on your first day. If you’re willing to put in the effort to learn, you’ll earn the respect of your colleagues and eventually find success of your own.

“Prudential Advisors” is a brand name of The Prudential Insurance Company of America and its subsidiaries.

Prudential, an Equal Opportunity Employer (disability/veteran), All qualified applicants will receive consideration for employment without regard to race, color, religion, sex, sexual orientation, gender identity, national origin, genetics, disability, age, veteran status, or any other characteristic protected by law. EEO IS THE LAW. The Prudential Insurance Company of America, Newark, NJ and its affiliates.

Prudential is an Employer that participates in E-Verify