The military is facing a growing recruiting crisis: 71% of Americans between 17 and 24 can’t meet the minimum criteria... 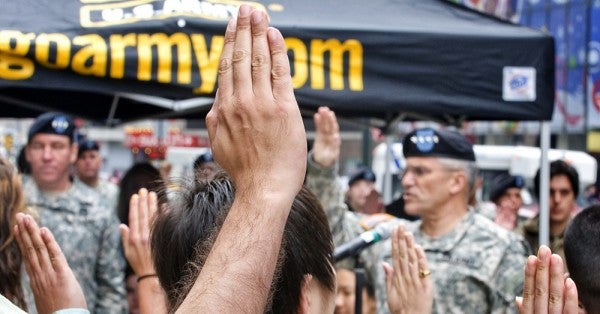 The military is facing a growing recruiting crisis: 71% of Americans between 17 and 24 can’t meet the minimum criteria for service, which places the burden of service on an ever-small and shrinking pool of troops with a family history of joining the military.

Yet with less than a third of the population eligible for service, “it’s a red flag for our country,” Bacon said. “If we don't turn this around, where does the world's strongest military recruit from?”

Some quick math shows what the services are up against. For the Army, the recruiting goal for the coming fiscal year is roughly 180,000 new soldiers. According to a detailed analysis by Army Times, only 9.7 million out of the 33.4 million Americans between 17 and 24 meet the Army's minimum standards. The reasons for disqualification range from failure to meet weight and fitness standards, misconduct, medical issues, mental health, and substance abuse concerns.

Once you take into account whether or not the remaining 9.7 million are enrolled in college — and that the Army doesn’t want the bare minimum for its future soldiers — the recruiting pool shrinks to just 1.7 million. And that’s before you get to those who are even interested in enlisting. What you’re left with is just 136,000 potential recruits interested in joining out of the original pool of 33.4 million, Army Times reports.

Due to the growing divide between civilians and those who serve, it’s from a small set of geographic regions and families with ties to the Armed Forces that our all-volunteer force is recruited.

Military service is increasingly shouldered by a small subset of the population — a “warrior caste” of multigenerational military families — and that population is shrinking. According to a Nov. 11, 2016 Pew Research report, the number of veterans has fallen by half since 1980, and as it declines, so too does the share of Americans with close ties to the military — those most likely to volunteer for service.

Roughly 80% of recruits entering the military have family members who served in the military; between 22% and 35% are children of veterans, depending on which service you look at, according to an Aug. 2 Slate analysis. Among Americans under 30, just a third have a relative with military service.

This uneven recruitment is also keenly represented along geographic lines, with a disproportionate number of new troops hailing from rural towns or the South. In 2010, rural Americans accounted for just 20% of the population, but were responsible for providing 44% of military recruits, as Task & Purpose previously reported.

Through incentives, aggressive marketing campaigns — and a spike in drug waivers for pot and a dip in testing standards — the Army in particular, and the military at large, can continue to keep its ranks filled, for now. But should a national security concern arise that requires mass mobilization, there may not be big enough pool of willing quality recruits to draw from.

As USNI points out, the recruitment problem would be compounded if the United States found itself in a security crisis that required a surge of fresh recruits.

“What happens if we had a national emergency?” Bacon asked during the panel. “I’m concerned about our reserve structure.”

Let’s just hope that those Americans who have made military service a family business — offering up generation after generation in defense of the country — don’t decide to go on strike.