Editor’s Note: The following story highlights a veteran who works at CVS Health. Committed to filling its ranks with talented... 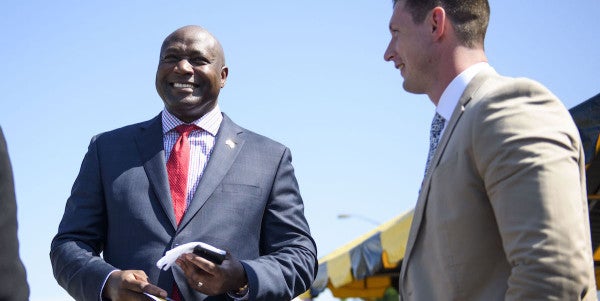 Editor’s Note: The following story highlights a veteran who works at CVS Health. Committed to filling its ranks with talented members of the military community, CVS Health is a Hirepurpose client. Learn more here.

When David Casey separated from the Marine Corps in 1995, he feared he was in big trouble. After seven years of service repairing electronics and maintaining crucial systems downrange during Operation Desert Storm, he had never put together a resume, met with career counselor, or conducted a practice interview. While his military skills seemed valuable on their face, the looming digital revolution would render his MOS outmoded within a few years.

“The two most stressful times in your service career are when you enlist and when you separate,” Casey, now the chief diversity officer and vice president of workforce development for CVS Health, told Hirepurpose in an interview. “If you’ve been, say, a signal support systems specialist for the last 20 years, you often enter the civilian world with no idea what you want to do and how long it will actually take to find the job you want.”

Casey got lucky; his time in the Reserve after separation served as a runway into the civilian world. But it is his first-hand experiences with the job-seeking frustrations that accompany separation that today make him the ideal candidate to help lead CVS Health’s charge to recruit more veterans into the company’s massive workforce beyond the typical circuit of base visits and career fairs. Leaders like Casey are helping service members in one simple way: by bringing the services directly to them.

In July, CVS Health announced the opening of the company’s brand new Talent Connect Center, part of Fort Bragg’s newly dedicated Career Resource Center in North Carolina. In partnership with Columbia Southern Education Group, the Talent Connect Center seeks to prepare service members for separation early in order to lessen the personal and financial stresses of transition through “in-person and virtual skill-building, training and mentoring, and to create an environment that values diversity, leadership and working collaboratively,” the company said in a release.

Outfitted with video-conferencing equipment that connects Fort Bragg personnel and CVS Health colleagues across the country, the center is designed to give service members the skills they need to translate their military expertise into the context of the civilian job market. Some 80% of military occupational specialties have a civilian equivalent, according to Casey, but veterans have trouble breaking through mainstream applicant pools simply because their expertise often remains masked by the opaque technical terminology and jargon of the various service branches.

“Human contact is important to help soldier demilitarize their resume so a civilian employer can understand it,” Casey explains. “Even within the military, each branch has its own unique terminology. We hired a Navy sailor in one of our offices, and her common saying is ‘if I can’t understand your resume, there’s no way a civilian can understand it.’”

According to Casey, it’s the bland-yet-daunting dance of the interview process can also prove to be a major source of stress for transitioning troops. “Other than going in front of promotion boards, you don't always have to interview a lot or put together a resume,” he explains. “They can tell what you did, how long you’ve been doing it, and how well you’ve done it based on what’s on your uniform.”

In addition to the state-of-the-art virtual reality interviewing simulation, the CVS Health Talent Connect Center inserts company colleagues directly into military installations to help service members not just reorient themselves with the civilian world, but start planning for the process up to 180 days before their actual separation date — early enough to avoid ending up dependent on state benefits amid an increasingly challenging job market.

“There’s a need to connect with soldiers before separation, especially in those MOSes that don’t necessarily have a civilian equivalent,” explains Casey. “Many service members who join at 18 and serve 20 years or more in the military simply have no idea where to begin. Our ability to be on base and start these conversations as far out as a year and a half is crucial.”

Kally Wilson, coordinator for the CVS Health Talent Connect Center at Fort Bragg speaks with service member Jessica Munoz who will be pursuing a CVS Pharmacy manager position when she transitions off active duty next year.Courtesy photo

Casey pointed to his colleague Leo Trimble, an Army signal support technician facing an uncertain future at the end of his 21-year military career. Thanks to CVS Health, Trimble managed to evaluate his own transferrable skills and put together a resume and interview strategy for jobs months before his separation date.

Those early meetings aren’t just for career soldiers isolated from the civilian world for decades, but young service members who simply don’t know how to translate their unique and invaluable military skills into a career trajectory. It’s not a matter of aiming for a particular job, but “sitting down and taking an inventory” of learned skills, as Casey puts it.

“Young Marines are accountable for tens of millions of dollars in government assets before the age of 20,” he laughs. “Who else has profit-and-loss experience like that?”

But that visible, constant presence of career resources on military bases won’t just help service members of all ages and experiences with their job hunts. CVS Health says that since 2015 the company has hired 8,000 people with military expertise and 2,300 military spouses for in general management, pharmacy tech, and other roles.

“There’s a myth that companies like us place in retail, middle-skill jobs,” says Casey. “The country needs 5.6 million highly skilled healthcare workers by 2020. Those skills are available to us in the military, and there are too many employers who aren’t tapping into that pool.”

For CVS Health, the dedication of the Talent Connect Center not only reflects the company’s gratitude for our nation’s military and their service, but it is also a reminder of all that they still have to offer our nation.

“Service members are attracted to mission-driven organizations, to those with a sense of a call of duty,” he adds. “You’re not just wearing a uniform, whether it's fatigues or a suit. That sense of working for a company with a purpose and mission has proven more invaluable to transitioning troops than anything else.”