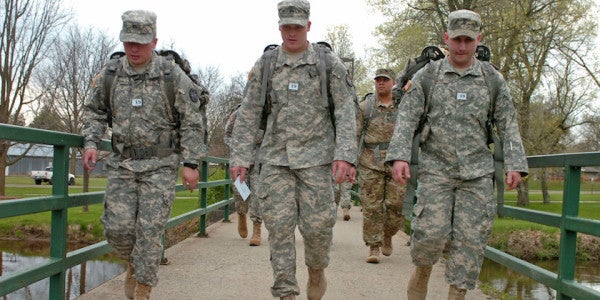 At Stanford, I started to realize just how little I knew about career possibilities. However, through conversations with classmates I learned about the careers they held prior to business school, and I started to understand the playing field and where I might be most fulfilled.

In the last two months, I’ve interviewed more than 50 veterans about their transition from military to civilian life. What’s surprised me most is that despite the differences between service branch, time served, motivation for getting out, and ultimate career path — the trends that emerge as part of our discussions are remarkably similar. Out of all the interviews I’ve conducted, five big ideas stand out far more than anything else.

1. They underestimate the cost of leaving the military.

Nearly every veteran I interviewed failed to anticipate the dramatic change in their personal finances when they left the military. Many of the most successful vets took pay cuts to prove themselves and work their way to the top, or took months longer than they anticipated in their job search to hold out for their ideal opportunity. Universally, they faced a steep learning curve when it came to new realities like taxable income, cost of living, medical insurance, or utilizing veteran benefits.

As Nicole Schwegman shared, “I never in my life had to pay for health insurance — it was a huge shock. I had a stomachache and wanted to go to the hospital and my husband told me our insurance hadn’t kicked in. So I had to learn the hard way — I don’t have insurance and have to pay for that.”

This is one reason why sites like The Military Wallet and The Military Guide are so crucial. The Transition Assistance Program is not broad or current enough to bridge this gap in knowledge. Anticipate this change and take advantage of free resources like these sites to gain an advantage as you start your transition process.

2. They don’t realize they may have to take a step back.

A popular myth among veterans is that they will emerge from active duty leaps-and-bounds ahead of their civilian peers. But as Brit Yonge put it, “It’s not like everyone else who didn’t spend time in the military is out there playing Lincoln Logs. They’ve got a job and they’re developing skills and they’re learning. I went into my transition with the assumption that I was nine years behind every pedigreed person out there. And I feel that attitude helped drive my hunger to play a very intense game of catch up.”

Many underestimated just how competitive the job market was for them and how there was a gap between their experience and the skills that hiring managers wanted. However, it is possible to close this gap — I’ve interviewed some of the top leaders at the best companies in the world who have done just that.

However, a thread throughout these stories is the importance of being humble and having a willingness to start lower than you expected. Assume you’ll need to work harder and smarter than your peers in the civilian world to learn the skills they perfected while you served your country.

3. They don’t understand that “selling” is critical but not natural.

The social mores within the military go counter to the concept of selling — we deal with absolutes, and know that misrepresentations and inaccuracies can cost lives. Civilians who are much more willing— and better accustomed — to selling themselves.

No matter what you do when you leave the military, it’s going to involve salesmanship. The good news is that, whether you realize it or not, you’ve had a fair amount of experience at it. You just may not have viewed it as selling: Advocating for why a subordinate deserves a promotion, getting buy-in from a team for a plan of action, or even just negotiating a watch bill. However, the sale that will be most essential in your transition will also be the most difficult for you — you’ll have to sell yourself.

Because of this, nearly every interview contained advice to be proud of one’s service. It will take more practice than you think; as Brooke Jones-Chinetti said, “It’s up to you to tell them your story — you need to practice over and over again, because it’s a new skill set, and something you never had to do in the military.” That’s why it’s so vital to get your reps in and get comfortable with this aspect as it is not going away.

4. An “I can do anything mentality” is not helpful.

One of the many advantages veterans have is their determination to be anything needed to accomplish the mission. However, most veteran don’t know how to specify which skills will be valuable to a hiring manager. While you may be a “jack of all trades,” not putting your experience into terms that apply to the position you are looking for could be closing doors.

Don’t be the transition veteran who looks for a job by asking the equivalent of, “Do you know of anyone hiring?” That’s too general and shows that you haven’t thought about what specifically you want to do. Far more effective is to “do the work for the other person” — know exactly what you want so that it is easy for them to help you. Molly Laufer went directly from the Navy to employee #1 at NatureBox (which now has over 100 employees and $58M in funding). She attributes this to having a single statement ready for everyone she met:

“I’m Molly, I just got out of the Navy. I’m interested in startups in the food, health or fitness space. And I’m interested in roles in marketing and social media. Do you know anyone who is in that space who would be open to having a conversation with me about what it’s like to be in a similar position? I’d love to learn what it’s like to work at a food, health, or fitness startup.”

5. They don’t realize that self-knowledge is the single most important component in a job search.

Self-knowledge emerged as the overriding theme in what was most critical in the transition to a civilian career. Whether you realize it or not, your military service is an enormous part of your identity — an identity you’ll need to refine and expand as you enter the next chapter of your life. Your transition from the military allows you to explore new opportunities and redefine what matters most to you in your new career.

Annie Taft, after soul searching on active duty in the Army, decided she wanted to go to culinary school. Though a difficult decision at the time, that initial step lead her to create her own company, The Brazen Gourmand.

After 20 years of service, Bob Underwood went so far as to hire a Ph.D. as a coach to help him figure out what he really wanted out of life and a career, and where he would find the most fulfillment in a job. Although it took extra time and work, it landed him at a job where he is extremely fulfilled.

Your ability to be challenging and honest with yourself will make the most critical difference in narrowing your job search (rather than “boiling the ocean”) and finding a job that will make you fulfilled.