Why Every American Should Pledge One Year Of Public Service

“Military veteran” is one of the few terms — and experiences — that binds people from different backgrounds who don’t... 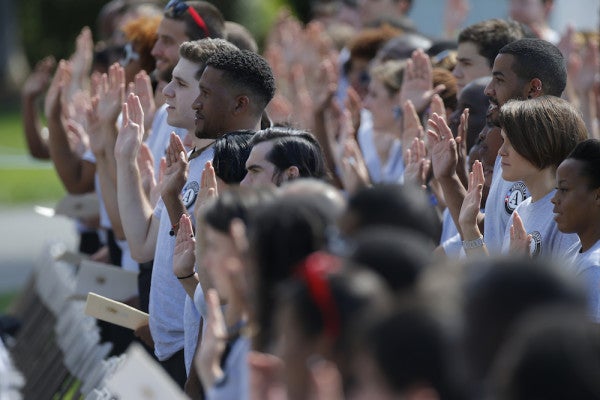 “Military veteran” is one of the few terms — and experiences — that binds people from different backgrounds who don’t know one another. The question, “Where’d you serve,” is a social level-setter, and points to something much deeper than being alumni of the same school or having grown up in the same hometown. It’s such a strong bond, in fact, that many military vets have trouble connecting with people who haven’t had that experience.

But, if more people, especially military veterans, were willing to see it, there’s an opportunity for a similar bond between military veterans and others who have served as teachers, AmeriCorps members, foreign service officers, Peace Corps volunteers, and an array of other opportunities where young people step out of their comfort zone to serve a cause greater than themselves.

I’d encourage all military veterans to take a much broader view of service, and act on it. When you’re transitioning back home, in to school, and in to work, don’t just sniff out the military veterans — search for all sorts of people who have different service backgrounds. The question, “Where’d you serve,” can mean many things to many people. You’ll find a rich and broad pool of friendships there.

In fact, I think our country would be a better place if every young American engaged in some type of full-time public service. Imagine if the starting point for every conversation wasn’t, “Where’d you go to school,” or “Where are you from,” but rather, “Where did you serve?”

Related: Could one year of mandatory national service change this country? »

Of course, the point of such service isn’t limited to some need for cohesion (though I do think that’s important). Service is a great strategy for solving real problems in education, health care, conservation, and an array of other areas of unmet need. And it’s equally empowering as it helps to mold young men and women into mature, others-oriented adults and future leaders.

I currently serve as the director of The Franklin Project, an initiative begun two years ago by retired Gen. Stanley McChrystal. We’re aiming to make a year of service a cultural expectation, common opportunity, and civic rite of passage for every young American. Most young people would not join the military, but would complete a civilian service year at a host institution such as a school or nonprofit. As one of many initiatives, we’ve released a pledge whose aim is to democratize the meaning of “service to country” by getting members of the military, veterans, and family community to express support for the idea.

In the last several weeks, the on-again, off-again debate about the draft has re-emerged. To be clear: The Franklin Project is not advocating for a draft. Nevertheless, the debate tends to focus around two poles. Some argue that a draft would prevent protracted conflicts and solve all of our social ills. Others suggest that a military draft is wasteful, and that any form of universal service smacks of unbridled idealism and social engineering.

There’s a healthy in-between. While mass conscription wouldn’t be useful, our culture would be better off if some type of service was expected, as much as a high school education is an expectation today. To be sure, the burden of the last 13 years of war has been placed on a small percentage of our society, but it’s also a sign of progress that our nation is so secure even as so few Americans are asked to take up arms in our defense.

We don’t need social re-engineering, but it would be helpful to course correct for some of the unforeseen consequences of our national progress. Because there’s no longer any common experience of citizenship, and no correlated sense of duty, we hold our citizenship in less esteem. It’s also easier to live our lives with less empathy for others: As one example, Americans are less likely than ever to live near someone in a different income bracket. National service will not solve income inequality, but it would create an experience where people from different backgrounds have the chance to know one another and work in a team. That’s a good thing, and not an opportunity enough Americans have in school, at the office, or in the normal course of life.

A culture that expects service would not make for a perfect America, but it would make for a country more aligned with our stated values and ideals. Practically speaking, national service has the power to solve some problems, transform young people’s lives, and unite Americans from different backgrounds.

It’s a paradox that we’re more connected to that which we’ve sacrificed for than that which we were given. I’m so lucky to have had the opportunity to take responsibility for something greater than myself, to have had the chance to get close enough to a problem to smell it and respect it, and to have done it with a cross-section of Americans from every background. Many people are doing such service today; some abroad in tanks, planes, helicopters, COPs, patrol bases, and ships, and others at home in classrooms, community centers, ball fields, and national parks. If everyone had such an opportunity, our country, and our citizens, would be better off.