Why The Military Needs Diversity

In the comments section of a recent article in Task and Purpose, someone wrote, “Diversity is no substitute for excellence.... 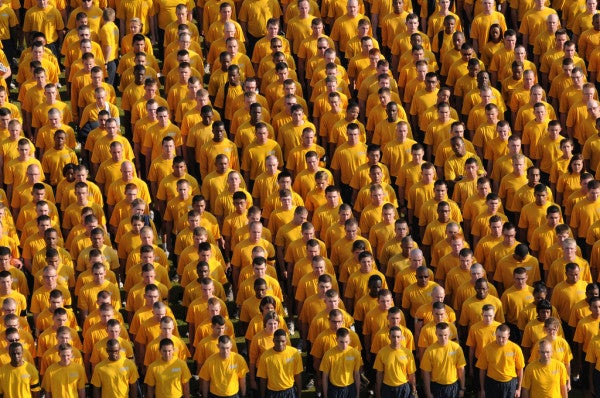 In the comments section of a recent article in Task and Purpose, someone wrote, “Diversity is no substitute for excellence. Period.” I’m sparing you the all-capital letters typical of the comments section genre. Several other comments echoed that commenter’s statement, with widely varying degrees of eloquence and sanity.

These were in response to writer Anna Granville’s statement, “The majority of senior military leaders are white, Christian, conservative men … who grew up middle-class or privileged … this also means there’s a lack of diversity of ideas, a resistance to alternative ways of thinking, and the lethality of group think.”

As with many hot-button issues, the issue of diversity has been twisted so that in the minds of many, it has devolved into a caricature where there are only two possible positions. There is either absolutely no institutional acknowledgement of the existence of minorities at all, or there is some type of strict quota-based, “affirmative action” hand-out system totally independent of individual merit. As with most political and ideological issues, there is actually a practical and realistic center.

For whatever scoffing the overused term “diversity” engenders, it has significant payoffs. All else being equal, a team with more than one represented demographic will tend to perform better, especially when it comes to producing innovation, which becomes more important to the military with each passing day. Groups with members of varied backgrounds generate more ideas and encourage individuals to “up their games.

In the military, we sometimes add tactical necessity to the mix — the Marine Lioness program is an example. It allowed female Marines in units to conduct searches and collect actionable intelligence among local women in Iraq. Additionally, in a military operating in far-flung reaches of the world, having diverse backgrounds often leads to units having individuals conversant in the culture or language of an area of operations.

Additionally, the corporate world already widely recognizes diversity as a necessity for recruitment and retention and the military should as well. Having minorities and women in a workplace helps to recruit and retain them — seeing people like you makes a difference. White men have benefited from this principle for generations — they just never consciously think about it.

It’s not a choice between diversity and high standards. They aren’t mutually exclusive. With the right approach diversity can actually increase the military’s standards.

Let’s start by saying that there’s nothing wrong with being a white Christian male. I’m one myself. I know that senior military leaders of that persuasion worked hard to get to their positions, but only the most naive would not admit that some others of different backgrounds might have to exercise more initiative or work a little harder to reach the same level.

A major issue here is that from adolescence on, white males stare military service in the face as a primary option. It’s not uncommon for them to have an unbroken male lineage of military service going back to their grandfathers and sometimes beyond. Their families and communities wholeheartedly endorse them joining. That doesn’t occur nearly as often for those from other demographics. For many women and some minorities, joining the military, especially as an officer, is not as obvious an option as it is for a typical white male.

This is where an opportunity to encourage diversity without compromising standards comes in. Diversity doesn’t have to be some plan by which a thumb has to be put on the scale favoring the minority or the woman in any selection; like the type of affirmative action where a racial or gender-based golf handicap gets figured into the Armed Services Vocational Aptitude Battery score for enlisted service members, SAT scores for officer programs, or some other standard.

By just making a bigger effort to broaden the pool of applicants we select from, we have the ability to increase, not decrease, quality. If there’s a large pool of potential applicants who are ignoring the option of joining the military for whatever reason, then by taking steps to encourage more of them to apply, quality goes up, not down. To use a simplified example, if you need to pick 10 people for a job, are you more likely to get higher quality recruits from a group of 50 applicants or 100?

The biggest example of this is the under-representation of women in the military. Leaving the combat-exclusion debate aside, if women applied to the military at the same rate as men, especially to competitive programs such as officer selection, the military’s selectivity, and thereby its quality, could go way up.

The same principle applies to under-represented ethnic minorities as well, albeit in a more marginal fashion, because we aren’t dealing with a near-doubling of the potential pool.

Culturally, the military has to take an honest self-assessment as an institution and ask why some of these populations don’t join at the same rate as the stereotypical white male. To seize an obvious example, a lot of parents are going to discourage their daughters from joining if they feel that sexual assault is one of the occupational hazards. While the Department of Defense’s handling of this issue has been hamfisted and often counterproductive, the fact remains that this perception holds the military back in a big way, and that needs to be fixed.

Getting more women and minority applicants can be as simple as advertising the military more to those groups. It may also mean strategies such as placing recruiters into communities that may initially yield lower returns, in hopes that over time the military will be more recognized as an viable career option.

Other steps to broaden the possible pool for competitive selection include recruiting more officers out of the enlisted ranks, rather than out of high school for ROTC or academies. That would lessen the disparate impact of poor high schools in favor of proven job performance, while providing more role models of leaders from under-represented demographics.

Diversity doesn’t have to be accompanied by the straw man trope of lowered standards. If we embrace equality of opportunity, vice equality of results, it can be a win-win. It may take awhile, but we can actually increase the quality of our force, while gradually making a force that looks more like the nation it defends.