Over the sleepy D.C. week leading up to the 4th of July, Chairman of the Joint Chiefs of Staff Martin... 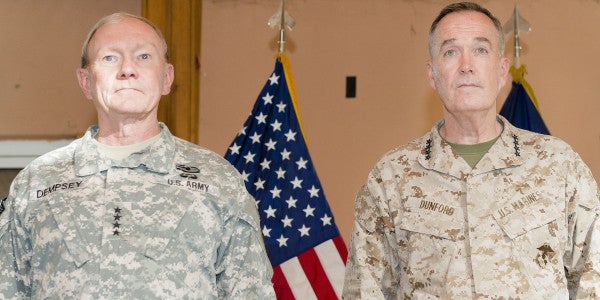 Over the sleepy D.C. week leading up to the 4th of July, Chairman of the Joint Chiefs of Staff Martin Dempsey and the Pentagon released the 2015 National Military Strategy, the first since 2011. The document, hailed as “remarkably readable,” provides a bad news/good news story on the role and capability of the U.S. military in meeting threats to U.S. national security. Many of the sentiments listed in the document were further reiterated by Dempsey’s presumed successor, Marine Corps Gen. Joe Dunford, at his confirmation hearing on July 9.

Threats continue to grow. The document outlines the contours of where the U.S. should expect to use the military in coming years — a growing panoply of major-power tensions, hybrid conflict, and non-state actors. Admittedly, there is a tendency to believe that no period of American history is ever as complex as the present one, frequently undermining the reality that complexity has always existed whenever and wherever U.S. military forces are used. Yet the strategy provides a logical argument as to why the threat profile in the ensuing years is indeed more complex than environments faced in the past.

While the Cold War era was marked by great-power struggles and the post-Cold War era by the disruption of non-state actors, the U.S. is entering a new era in which growing tensions with states (primarily China and Russia) coincide with rising threats from ISIS et al.—necessitating U.S. military mastery of the full continuum of conflict simultaneously. Operationally, this means that the U.S. military must master deterrence and denial for high-consequence state-on-state conflict while also mastering disruption and degradation of high-probability non-state conflict.

There’s a high potential for inadequate resourcing. While the document does not explicitly state that the military is under-resourced for the strategy at hand, it does foot stomp on the fact that the United States “will not realize the goals of the 2015 National Military Strategy without sufficient resources.” This week, not five days after the document’s release, reports that the Army plans to reduce its end strength by 40,000 soldiers by Sept. 30, 2017 surfaced — a move driven purely by budgetary constraints, not strategic foresight. The ideal budget would provide “sufficient levels of investment in capacity, capabilities, and readiness.” These recent cuts indicate that, at the very least, capacity and readiness will suffer at the current resource level.

The state of our alliances is strong and diversified. The National Military Strategy highlights the importance of our allies in an effective strategy to assure access to contested environments, deterrence capabilities, and hybrid conflict response. In particular, the document highlights the advanced partner capabilities of NATO, Australia, Japan, and Korea, while underscoring the importance of the developing security relationship with India and developing specific capabilities in cyber security and disaster relief with partners such as Singapore, Indonesia, and Bangladesh.

Our personnel policies are evolving. The most hopeful and surprising element of the National Military Strategy focuses on new ways to attract and retain the best people: “our decisive advantage” over any adversary. While the military has arguably always focused on cultivating creative, adaptive, innovative leaders — particularly in the 40-plus year era of the all-volunteer force — the strategy actually outlines a new means for accomplishing that end. It provides sorely needed fresh thought and a remarkable amount of potential flexibility for the way the military attracts, educates, develops, and promotes the best people in order to retain them. Among the provisions of the document are updates to how the military rewards critical thought; promotes innovative minds; considers how society is changing the pool of eligible applicants; rewards talent; engages civilian-sector experience; enables flexible career options; bridges to the civilian population through the reserve component; and better integrates and utilizes women to meet the needs of the military’s mission.

Fundamentally, it is this last piece that should make us the most hopeful about the fate of American national security in the hands of the military. The chairman’s forward captures it best: “despite what is likely to be a difficult future, we are blessed to be able to count on the young Americans who choose to serve, to live an uncommon life, and to defend their fellow citizens.”

Even in the increasingly hostile environment — globally and fiscally — the U.S. military can prevail if it is empowered to attract and retain the best individuals in uniform.