Courage, usually a central word in selling any war story, requires the proper packaging for the American public to pay... 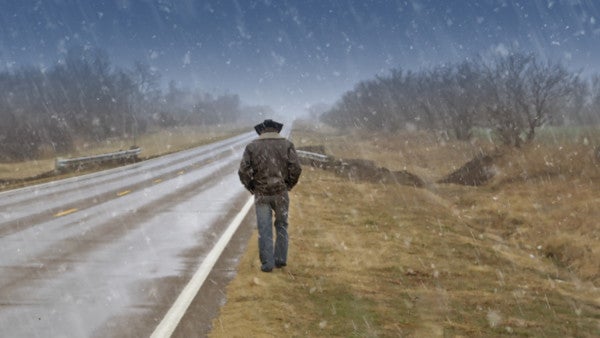 Courage, usually a central word in selling any war story, requires the proper packaging for the American public to pay attention. Even when the story is controversial, like “American Sniper,” if polished properly by the film industry, the movie can be the highest grossing movie of the year.

The courage on display in the new documentary about veterans living with post-traumatic stress and traumatic brain injury, “Searching For Home: Coming Back From War,” was powerful enough to move many in the crowd to tears, but I question whether or not the general public will be willing to share in this journey.

The film, directed by Eric Christiansen, weaves a montage of stories crossing generations of conflict from World War II to present day. The film touches on the perspectives of families, mothers, and wives with male figures largely absent from these stories. The stories are raw and display the various levels of healing veterans go through after returning from combat, while masterfully pulling on the common themes of war coming home with the veteran, resiliency through peer support, and social dysfunction.

I attended the East Coast screening of the film hosted at the University of Southern Maine in Portland on Oct. 3 with several of my veteran friends, their wives, and girlfriends. The auditorium was nearlyfilled with civilians, members of various veterans groups, and charities. The director’s stated goals of being based on the truth, healing, and hope of the veterans community were all clearly represented in the support of the community who came to the viewing. Rowdy bikers from various groups intermingled with mothers of veterans who run charities and wore cocktail dresses. Pretenses were gone, and the atmosphere was one of shared sacrifice and support of the veterans who served.

The documentary follows a generally linear plot line, from how a service member becomes interested in serving, to entering the military, going to war, and the inevitable return and post-war life. Each story is different in its own way, with generations facing their own challenges, and individual people with their own views and experiences. However, the stories are intermingled to get a clear view of America, as service members are as diverse as the nation they represent. The courage displayed by those sharing their stories is where this documentary shines.

The stories of the Payeur family are very compelling, focusing on Army Cpl. Mike Payeur, who was injured by an improvised explosive blast in Iraq, and his mother Pam, an excellent example of support at home. Pam discusses many things, but one was her son’s tattoo “nineteen” on his neck, and how it feels to know her son had to kill 19 people in order to live. She described the “head fuck of coming home to Maine” at the Portland airport for Mike. She said he looked like a deer caught in the headlights coming down the ramp. “He doesn’t belong here,” she said.

Payeur discussed how killing was something he will never regret. He told stories of people with yellow ribbons on the backs of their cars looking down on him for feeling that way. His thoughts on these hypocritical points of view are the same as those I hear from many veterans and share in many ways.

A World War II airman’s story of his ongoing struggles with post-traumatic stress disorder was disheartening to some I spoke with after the film, thinking that it may never subside. His family was quoted from journals, longing for the kind and gentle man they had sent to war to replace the person who had returned. He spoke of troubles with employment, his anxiety constantly forcing him to change jobs because, “more responsibility, I couldn’t handle it.”

Staff Sgt. Sandra Lee gave her account of combat and being the victim of military sexual trauma while serving on an Army civil affairs team in Iraq. Her story of resiliency through treatment was powerful, culminating with her marching and standing united with other victims of military sexual trauma in New York City. I felt that there was far more to tell here as far as her ability to continue accomplishing missions after the assault, but was left with the feeling that it was her decision to keep that story closed.

Christiansen pulls in multiple vignettes spanning a wide range of generations and displaying the spectrum of recovery. Some veterans have dealt with their demons through traditional therapies or groups and seek advanced degrees in counseling to better understand the situation. One veteran connects with his Apache heritage to find some form of peace, just as his father and grandfather had. Some are still struggling with isolation and the heavy-medicating anti-treatment protocols of the Department of Veterans Affairs. Families share stories of their struggles to stay supportive, attempt to prevent suicides, and feel the cold shoulder of friends who grow tired of the challenges they are facing. All share the continued struggle of wounds which never go away.

The stories from the Vietnam-era veterans tie a great deal of the documentary together. Not only do they provide some of the most compelling statements about reintegration, but their efforts to heal and then share in the process with the post-9/11 generation are phenomenal. The stories in the film show how the common bond of service empowers the older generation to guide so many young veterans in their recoveries. These men speak candidly about the pain of finding their way home in a place that did not want them initially, and the hope they gained from helping those who came after them.

Overall, the film returns to a simple theme: Find your battle buddies, stick with them, and remember they come from various generations.

What sets this documentary apart are the raw testimonials mixed in throughout the narrative. Graphic storytelling that crosses generational and social lines makes the absurd nature of conflict sink in for the uninitiated. It forces the civilian to see how they may not have been as supportive as they thought.

What this documentary doesn’t do is make everyone feel great about themselves, or any of the wars in general. That is part of why it becomes a challenge for anyone to watch. I encourage veterans to see this because it will let you know that you are not alone, and provide you some form of hope. I challenge civilians to find the courage to watch it, and open their eyes to what it means to be a veteran of our nation’s conflicts. For all of the courage shown on the battlefield, it is the least we can do.

“Searching for Home: Coming Back From War” will air on Veterans Day, Nov. 11 at 9 p.m. Pacific Standard Time on KCET in Southern California and at 9 p.m. Eastern Standard Time nationally on Link TV. It will also be available on iTunes, Google Play, Vudu, Amazon Video, and most major video on demand systems on Veterans Day.