Great Leadership Has Nothing To Do With Gender

As women are integrated into combat units previously unavailable to them, there’s been a lot of talk about and concern... 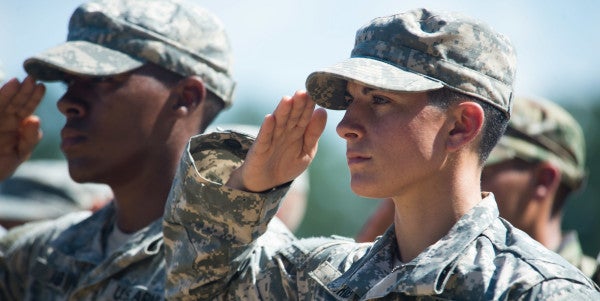 As women are integrated into combat units previously unavailable to them, there’s been a lot of talk about and concern for how this change will deteriorate morale, unit cohesion, and esprit de corps in those units. I can't help but think that those making these arguments are merely equivocating, justifying a learned chauvinism, and mustering up the last argument they can think to make against a truth that we’ve known all along: Integration is the right answer.

I'm reminded of something that happened to me 13 years ago, when I was standing in formation during my first week as a new cadet at West Point. Two upperclassmen — a man and a woman — approached me with the knowing smirks of an inside joke on their faces, looking as though they were about to settle a bet. They were smiling because, as upperclassmen often do to plebes at West Point, they were about to ask me a trick question. They were betting I’d say the wrong thing, and then they would punish me for it with lots of pushups. In short, they were screwing with me, and this was going to be fun for them.

The woman, my platoon leader, pitched the question, slyly, “New cadet, would you rather answer to a man or a woman as your leader?” I'd obviously been presented with a false dilemma, and either option would get me into trouble. The man, my platoon sergeant, looked at me expectantly, waiting for me to flub. Waiting to prescribe me with pushups.

My response was immediate, off the cuff, and one of the sincerest sentences I’ve ever uttered: “Ma’am, I really don’t care, as long as they’re a good soldier.” They both smiled, surprised I’d found a way out of the trick.

My platoon leader beamed, “That’s an outstanding answer, new cadet.” She turned and looked, smugly, at my platoon sergeant.

“She has a point,” he shrugged. No pushups this time.

This was probably the only “right” answer I gave to any upperclassman during my entire plebe year, and I stand by it still, even though at the time, I knew nothing about the military. Or leadership. Or life, really. You could say I was uninformed. Or you could also say I was uncorrupted.

At the time, I was mostly ignorant of the sexism that exists in this world. I’d been sheltered from it because I was just 18, and, moreover I still believed what my parents taught me, which was that I would never be limited by my gender. They’d taught me that my character, talent, skill, and most of all, my hard work, would decide what I would and wouldn’t be able to accomplish. I suppose sometimes naïveté is quite wise because it is just so pure and uncorrupted.

Before our minds become adulterated by small-mindedness and institutional and societal norms, we innately know that it is not gender, but rather proficiency, leadership, and integrity that matter when it comes to who we want serving alongside us in our profession of arms.

In the Army, I worked in logistics, which is where I encountered one of the worst officers I've ever met. He was not a logistician, but a combat engineer captain who'd been exiled to a staff position at the logistics battalion because every time he went outside the wire in Iraq, he would become so scared, he'd cry. Yes, cry. I imagine serving under such a leader must have inspired poor morale, unit cohesion, and esprit de corps in his platoon, despite that he was so highly qualified to lead in combat, being of the male gender and all.

I had the displeasure of serving alongside this person for almost a year — thankfully while in garrison, not while in a combat zone — and he continued to prove a terrible soldier, through and through. And the more evident this fact became, the more confused and disheartened I became to know that while I was quite sure that I (and any number of my peers, for that matter) was a better leader than he was, I would have been “unqualified” for his former job simply because I am a woman, and until recently, even though women could serve in the engineer branch, we weren't permitted to serve in combat engineer units. It no longer seemed like a mere technicality, but instead a real tragedy, that a man so lacking in personal courage had been trusted to lead troops in combat while so many more qualified and courageous women were never even afforded the chance.

We owe it to our military and to our nation to have the best leaders leading our troops, which means they should be selected from the widest pool of highly qualified candidates. That’s why integration will undoubtedly make our military stronger. It isn’t the right answer for women. It’s the right answer for everyone, and if we dare to be honest with ourselves, we’ll find we’ve known that to be true all along.