A Fallen Cadet Lived His Ideals To The End. What About The Rest Of Us?

Peter passed away on February 14, 2018 in Parkland FL. He is a hero, having sacrificed his life to protect... 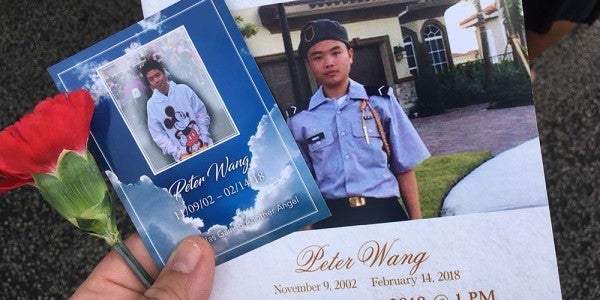 Peter passed away on February 14, 2018 in Parkland FL. He is a hero, having sacrificed his life to protect his friends and classmates. He loved being in the JROTC and planned on attending United States Military Academy West Point. He liked the Houston Rockets, hip-hop music, playing basketball and spending time with his friends. He is survived by his father Kong and mother Hui, and his brothers Jason and Alex and extended family.

CORAL SPRINGS, Fla. — There were perhaps five hundred of us — family, students, servicemembers, first responders, American Legion riders, JROTC cadets, Young Marines, reservists, retirees, even my Sea Cadet commanding officer from 24 years ago, squeezed into his dress whites. We parked our cars across three strip malls here on this stretch of suburban sprawl and squeezed together, flowers in our hands, under a wind-whipped tent a few miles south of Marjory Stoneman Douglas High School — named for one of our homegrown heroes, who dedicated her life to preserving Florida’s pristine beauty and lived to 108. The school will be remembered now not for Douglas’ abundance, doggedness, and longevity, but for the disorder and destruction wrought there in a few minutes last week by a determined 19-year-old with few life skills beyond an ability to hold a 5.56mm magazine-fed gas-operated semi-automatic rifle.

In a just world — not a perfect one, only a just one — Peter Wang, 15, would be dressing out for JROTC at Stoneman Douglas today, working on his fitness, planning the steps to a nomination and appointment for West Point. The Military Academy today announced to Peter’s family that he would be admitted as a member of the Long Gray Line’s class of 2025.

But Peter is dead. His appointment on the Hudson will not be kept. We were here to say goodbye.

“In my classroom, I tried to teach Peter principles of good citizenship,” 1st Sgt. John Navarra, Peter’s JROTC instructor, told us, pausing to allow simultaneous Chinese translation for the friends and family gathered here. “I did not realize how great a citizen he already was.”

Cadet Maj. Marshall Ryan recounted how “Peter was a hurricane of sunshine” — one of the unit’s best marksmen sure, but also a source of levity on the drill field and the firing line, always joking, sometimes even ordering UberEats on his phone as his classmates plinked away at their targets beside him.

“I always told him to lock it up,” Ryan said, “but I would be right there laughing with everybody else.”

It is supposed to be some solace to us to know Peter, this good kid, this shiny exemplar for our nutty, phrenetic South Florida community, died heroically, living his ideals to the end. He was last seen alive by his classmates holding a door in his school for others to escape the hail of small-arms fire.

I struggle with how, and when, to explain to my elementary-bound 5-year-old son that sometimes people murder other people in our schools. I always remember Mr. Rogers telling a story about seeing scary news on TV when he was a child:

“My mother would say to me, ‘Look for the helpers. You will always find people who are helping.’ To this day, especially in times of disaster, I remember my mother’s words, and I am always comforted by realizing that there are still so many helpers — so many caring people in this world.”

In his final moments as a human being, before an unsophisticated killer with a sophisticated weapon took away all his plans and potential, Peter Wang was a helper. He was every inch the man he’d wanted to be.

It is good that we should make sense of him, and his life, and the lives he touched. But there is no sense in his life’s abbreviation. As family members recited lines dedicated to Peter, and to the last messages that he and his classmates sent out from their high school-turned-battlezone, many in our crowd wept openly and audibly. Not simply at the injustice of it all: Many of them, teachers and friends, were survivors of the carnage that took Peter.

“He was a rock for us,” Ryan concluded, as cars whipped by behind us on University Drive, one of the county’s busiest thoroughfares. A touching memorial with a road-noise soundtrack: It was the most Florida scene I could imagine, outside of the shooting itself, a growing fact of life in our noisy, divided, and armed dystopian paradise.

Across the street, the television media waited, as respectfully as they could muster. Across the internet, the opinion-havers were tweeting and vlogging. Grown men and women were making serious money calling Peter’s death a false flag, or demanding armed drones in schools, or sneering at people for “politicizing” his death.

None of those bloviators were here with us, holding red and white flowers for Peter. None of them could hear the speakers, politicizing what’s already inherently political: the ceaseless mass murder of schoolchildren in a state where it’s harder to earn a beautician’s license than to purchase a military-grade carbine.

“One person can make an enormous difference. One person can start a war… or end one,” one of Peter’s kin told us, adding that it was on all of us to act on Peter’s behalf after we left this communion. “We have to do something. Stand up and do something for our kids.”

When he left the makeshift podium, there was applause. It was the only applause all day.