Adopted at birth by a loving older couple, Nikolas Cruz seemed to struggle in recent years. His dad died when... 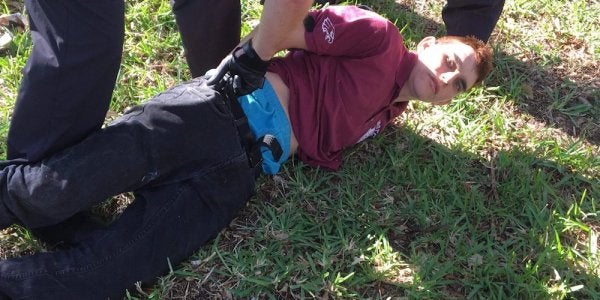 Adopted at birth by a loving older couple, Nikolas Cruz seemed to struggle in recent years. His dad died when he was much younger and the 19-year-old’s mom died just 3 ½ months ago, neighbors, friends and family members said.

The portrait that emerged of the suspected gunman in the mass shooting was of a troubled former student at Marjory Stoneman Douglas High School who was expelled for disciplinary problems.

Cruz was arrested without any serious incident at a nearby house very shortly after the shootings, which left 17 people dead and several more injured, Sheriff Scott Israel said.

The AR-15 used in the mass shooting was legally bought by Cruz, attorney Jim Lewis told the South Florida Sun Sentinel. Cruz already owned the gun when he moved in with his friend’s family in northwest Broward around Thanksgiving, Lewis said.

“It was his gun,” Lewis said. “The family made him keep it in a locked gun cabinet in the house but he had a key.”

Family member Barbara Kumbatovich, of Long Island, N.Y., said she heard media reports about the mass shooting in Florida but had no idea the suspect was the son of her recently deceased sister-in-law, Lynda.

Lynda and her husband, Roger, who died many years ago, adopted Nikolas and his biological brother, Zachary, after the couple moved from Long Island to Broward County.

Kumbatovich said she met the boys only once, when they were very young and attended a family funeral in New York. Lynda was a stay-at-home mom and her late husband, who died when the boys were younger, had worked in advertising.

Lynda had always wanted to have children and the couple adopted later in life, Kumbatovich said: “I think it was just something she really wanted to do.”

The boys were left in the care of a family friend after their adoptive mom died Nov. 1, she said.

“I know she had been having some issues with them, especially the older one. He was being a problem. I know he did have some issues and he may have been taking medication. [He] did have some kind of emotional or difficulties,” Kumbatovich said. “[Lynda] kept a really close handle on both boys. They were not major issues, as far as I know, just things teenagers do like not coming home on time, maybe being disrespectful.”

Another relative, who spoke on condition of anonymity over the sensitive matter, said Nikolas had been diagnosed with autism.

Lynda, who died of pneumonia, adopted Nikolas the day he was born.

Nikolas’ father died from a heart attack, the relative said, and Lynda had sought counseling for Nikolas at a young age: “She did her best getting him any help he needed.”

After their mom died, Cruz and his brother lived with a family friend in Palm Beach County but Cruz wasn’t happy. He asked a friend, who he knew from his time at Stoneman Douglas, if he could move in with the friend’s family in northwest Broward, said Jim Lewis, an attorney speaking on behalf of that family. The lawyer would not identify the family.

The family let Cruz move in around Thanksgiving, gave him his own room and urged him to attend adult education classes, Lewis said. Cruz also got a job at a local dollar store, he said.

“The family is devastated, they didn’t see this coming. They took him in and it’s a classic case of no good deed goes unpunished,” Lewis said. “He was a little quirky and he was depressed about his mom’s death, but who wouldn’t be?”

The family were fully cooperating with investigators, he said. Detectives were getting a search warrant to look for evidence in Cruz’s room late Wednesday, Lewis said.

Another home, in the Lantana area, was also being searched late Wednesday.

“He wore a hoodie and always had his head down,” she said. “He looked depressed.”

Emily Sucher, 16, a junior who lives in Parkland, was in her TV Production class when an administrator announced over the intercom to evacuate the building.

She had seen the suspect, Cruz, around school last year and remembers him as an “off kid” who would “smile weirdly, make weird comments.”

Sen. Bill Nelson said on MSNBC that Cruz wore a gas mask and had smoke grenades. “He set off the fire alarm so the kids would come out into the hallways and thus he had the opportunity with a crowded hallway to start picking off people.”

Trevor Hart, 16, who knew Cruz in Spanish class at Marjory Stoneman, said they ate together once in a while in the cafeteria.

Cruz participated in Army ROTC at the high school. Cruz had “a bunch of weapons” and talked about shooting lizards, squirrels and frogs, Hart said.

Shelby and Richie Speno moved on to the street where the Cruz family lived in 2005.

Shelby Speno said she’d been warned that Nikolas had caused trouble, such as biting a child and stealing neighbors’ mail. One time, he threw eggs at Richie’s car while he was driving.

“Lynda the mom was always apologetic. She had her hands full,” Shelby said.

“They were very much on their own. The kids seem to roam around and come and go as they pleased,” Richie Speno said.

Police were called out numerous times, and Shelby said Cruz was seen shooting at a neighbor’s chickens.

“I told my husband I was so glad they moved. I’m afraid he was the kind of kid who would do something crazy,” Shelby said. “The older he gets, the worse kind of trouble he got into.”

Jonathan Guimaraes, 17, said he and Cruz were in JROTC together: “He was normal. He didn't have any issues.”

Cruz was wearing a wine-colored ROTC polo shirt, black pants and black boots, when he was taken into custody. He was placed on a gurney and taken away in an ambulance. At 4:47 p.m., he was wheeled in to Broward Health North hospital in Deerfield Beach.

A short time later, he was brought to Broward Sheriff’s Office headquarters in a marked agency car that was part of a short convoy.

Handcuffed and wearing what looked like a light blue hospital gown, he was led into the building by deputies.

Math teacher James Gard said Cruz, a junior at the time, was in his class last year.

“He was a pretty quiet kid,” Gard said. “He was a very well-behaved kid in my class. He was never a behavioral problem in my class.”

Malcolm and Christine Roxburgh were neighbors of the Cruz family for many years.

“It was a wonderful idea. Two older people to have two little boys to look after. They were just kind people.”

Christine said Lynda asked her daughter, who lives up north, to take the kids when her husband died, but she refused.

He used to get into trouble and harass neighbors, the Roxburghs said. The police came to Cruz’s house many times, they said

A neighbor across the street kept little pigs as pets.

Christine said one time she saw Nikolas peeking in her window.

“I said what are you doing here? He said he was looking for golf balls. I said ‘this isn’t the golf course,’” Christine said.

One time he stole a neighbor spotted Nikolas trying to steal a bike from the garage when the door was open.

Christine said when the boy didn’t want to go to school, he would bang his head against a cement wall.

When their daughter was driving to work, Nikolas “slammed his book bag into the side of her car. She got out and said don’t you ever do that again.”

“He could have killed any of us,” Christine said.