One of the high school students who helped take down and disarm a gunman during a school shooting earlier this year graduated from Marine Corps Recruit Training on Sept. 20. 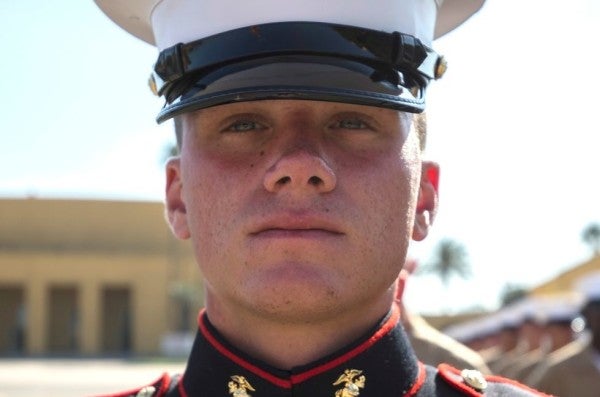 One of the high school students who helped take down and disarm a gunman during a school shooting earlier this year graduated from Marine Corps Recruit Training on Sept. 20.

Months before Brendan Bialy ever stepped foot on the yellow footprints, his willingness to fight in the face of overwhelming odds were apparent on May 7, 2019, when another student walked into his 12th grade English class at STEM School Highlands Ranch in Colorado and pull out a gun.

Bialy, along with other students in the class, charged at the shooter and tackled him to the ground.

“The gunman was there, then he was against the wall, and he didn't know what the hell hit him,” Bialy told the Denver Post.

Eight students were injured in the shooting, and Bialy's friend, Kendrick Castillo, 18, was killed.

The two suspected shooters — ages 18 and 16 — were arrested after the attack, and a judge determined there was enough evidence to try the oldest of the suspects on more than 40 charges. The younger shooter expected to face preliminary hearings on the same charges next month, Stars and Stripes reported.

Bialy's courage and his instinct to run toward danger distinguished him to his drill instructors during the months he spent at Marine Corps Recruit Training Depot San Diego in California, where he earned a meritorious promotion to private first class and graduated as his platoon's honor man.

“I don't think recruit training changed Bialy,” Staff Sgt. Marcus Chestnut, one of his drill instructors in Golf Company, 2nd Recruit Training Battalion, said in the Marine Corps' video. “He is who he was when he first got here. I think we just gave him some additional attributes that made him a stronger man and a basically trained Marine.”

“His past kind of reflected on some things we had to do here: quick reaction, a willingness to fight. His character really showed,” Chestnut added.

After graduating boot camp, Bialy will head to the Marine Corps School of Infantry for combat training, then to his MOS school for training as an Electro-Optical Ordnance Repairer tasked with working on optics for ground ordnance and missile systems.

“It's a battle as a parent,” Bialy's father, Brad, said in the Marine Corps video. “You love your child more than anything in this world, but at the same time you understand that what he has, you have to share. It's not really our choice anymore, he's one of those people — and the people that are all here, all these recruits, all these Marines — they have to share what they have.”

Bialy was a poolee at the time of the shooting, having entered the Delayed Entry Program in July 2018, but in the video interview he said that his “thoughts on becoming a Marine were nothing but reinforced after the shooting.”

“Everybody hopes what they're going to do in that situation is what I did — I was one of those people, and I acted the way I hoped I'd act,” Bialy added. “I knew that going to the Marines would build that foundation, as it has now.”