Some schools are barring recruiters from talking to students, Army secretary says

Army Secretary Mark Esper said on Friday that some schools "are not letting our recruiters in" to talk to students, and some school counselors "are not even presenting [the Army] as an opportunity, the chance to serve their country." 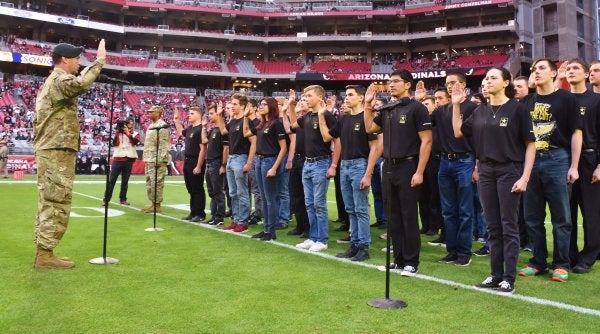 Army Secretary Mark Esper said on Friday that some schools “are not letting our recruiters in” to talk to students, and some school counselors “are not even presenting as an opportunity, the chance to serve their country.”

“It's considered the only path to success is college, and that there are no other paths,” Esper said at a Center for Strategic and International Studies event. “I just think we need to do a better job across America and our school districts, our states, our cities, to present the American military as a great path for the future.”

This resistance presents a bit of a roadblock for an Army with a renewed focus on recruiting this year after failing to meet its goals in 2018. The service announced its intent to recruit more aggressively outside of its typical comfort zone of the South, Southeast, and Midwest, and to push into 22 major cities like Boston, San Francisco, and New York.

Esper told reporters at a Pentagon roundtable on January 24th that the campaign to recruit in those cities had been “positive so far.” But he told reporters after the CSIS event that there's a “spectrum” of support found at schools around the country — some don't let recruiters in at all, some may let them in on “very restrictive purposes,” and others are less restrictive.

Esper clarified that he wasn't necessarily referring to schools in those 22 cities that were resisting recruiters, and that he hasn't assessed where in the country this problem is most prominent.

But, he said, all schools “should allow recruiters in just like they let in colleges to come recruit. … We should have equal access to America's youth.”

Army Chief of Staff Gen. Mark Milley had previously echoed the importance of expanding recruiting efforts on January 16th, telling reporters at an Association of the United States Army breakfast that around 50% of Army recruits “come from about 10 to 15% of American's high schools.”

“We need to expand – and we're doing that this year – rapidly expand the footprint by which we are canvassing to get recruits to come into Army,” he said.

SEE ALSO: The Army Is Fielding Hundreds Of More Recruiters After Failing To Bring In New Soldiers