How You Can Honor Hero JROTC Cadet Peter Wang, No Matter Where You Are

Peter Wang gave his life to save his fellow classmates when a disgraced former student opened fire at Marjory Stoneman... 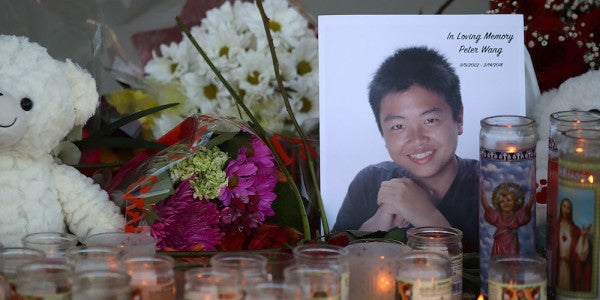 Peter Wang gave his life to save his fellow classmates when a disgraced former student opened fire at Marjory Stoneman Douglas High School in Parkland, Florida, on Feb. 14, but hundreds of service members and veterans across the U.S. are working to ensure that the JROTC cadet’s sacrifice is remembered forever.

After reportsemerged that the 15-year-old freshman was last seen alive wearing his JROTC uniform while holding the door for other Stoneman Douglas students to escape, the moderators of r/military — Reddit’s main military forum — immediately began working behind the scenes to honor Wang’s heroism.

“We saw so many posts by people who wanted to step up and come together as a community to provide support for the family,” rbevans, a r/military moderator, former Army fuel specialist, and Iraq veteran who asked not to be identified by name, told Task & Purpose in a phone interview.

The outpouring of support was immediate and tremendous.

“[The moderators] started with nothing,” rbevans said. “Within a few hours, we had folks stepping up for a color guard team, to send interpreters for mourners, folks reaching out to the Army band. People are passing this up the chain of command across all branches.”

Related: A JROTC Freshman Sacrificed Himself To Help Classmates Escape During Florida Shooting »

While the Wang family plans on a JROTC honor guard at Peter’s funeral on Feb. 20, they told the r/military organizers that they “would love if there could be a military presence,” they wrote in a recent update. And for those unable to attend the memorial ceremonies for Peter, r/military has provided details on how well-wishers can send patches or challenge coins to the Wang family as a sign of respect for their son’s sacrifice.

“Giving someone a patch or a challenge coin is an honor, a sign of appreciation and respect for a serious achievement,” rbevans told Task & Purpose. “JROTC isn’t technically part of the military, but what Peter Wang did truly exemplifies and embodies that highest value of selfless service.”

Candles that were placed on crosses still glow after last nights vigil for victims of the mass shooting at Marjory Stoneman Douglas High School, at Pine Trail Park, on February 16, 2018 in Parkland, Florida.Getty Images/Mark Wilson

Here’s how you can help honor Peter Wang and his family:

Attend the memorial services: Here’s the official information, courtesy of the Wang family:

Send a patch or challenge coin: The moderators of r/military created a pop-up submission form for service members and vets to register before receiving a mailing address for the collection of unit patches or challenge coins. Though the form was closed due to volume after a whopping 276 submissions in 24 hours, r/military offered to reopen submissions when reached by Task & Purpose and is reachable through Reddit’s messaging system here.