Since their inception in World War II, the Seabees — the Navy's hard-charging construction force — have summed up their... 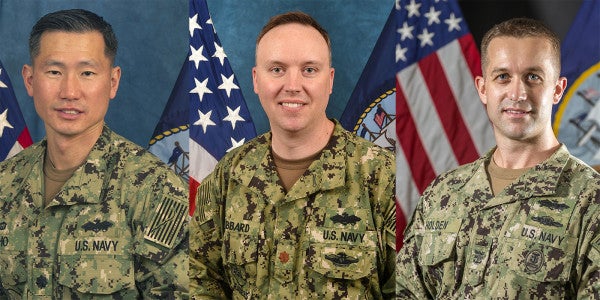 Since their inception in World War II, the Seabees — the Navy's hard-charging construction force — have summed up their ethos in a simple two-word motto: “Can do.”

It turns out, though, that there are still some things that Seabees really, really can't do. Like patching things up after a battalion's drunken officers-and-chiefs party that ends with the XO stumbling drunkenly through the woods of Okinawa wearing nothing but his combat boots.

The entire command triad of Naval Mobile Construction Battalion 4, currently deployed to Okinawa, Japan, was fired Feb. 11 after the unit’s executive officer was found intoxicated and walking naked in the woods on Camp Shields.

Lt. Cmdr. Jason M. Gabbard, the unit’s XO, was relieved after being discovered in the woods wearing only his boots following a command gathering for chiefs and officers, Navy officials said.

The commanding officer, Cmdr. James J. Cho, and Command Master Chief (SCW/EXW) Jason K. Holden, were also relieved for their handling of the incident, which they attempted to cover up, a source told Navy Times.

How fast is the Navy moving? NMCB-4's new command staff already has its bios up on the unit's official website.

T&P; has reached out to Navy officials at the Pentagon for more info on the lieutenant commander's moonlight ride; we'll update this story as that info comes available.

But the coverup, rather than the nude recon itself, is the real issue here: In a statement to T&P;, Cmdr. Cate Cook, a spokeswoman for Navy Expeditionary Combat Command, said the decision to terminate NMCB-4's command staff with extreme prejudice came down to simple trust.

“Our senior leaders are entrusted to uphold the highest standards of personal and professional conduct at all times. Meeting these high standards of conduct is as critical as meeting our high standards of material, personnel and operational readiness,” Cook said, adding: “When there are any indications that those values are not being followed, we conduct appropriate investigations and take action as necessary.”

NMCB-4's meltdown is the first time since the crash of the USS Fitzgerald that a CO, XO, and CMC all got fired at the same time; as Navy Times' Faram points out, it's a rare and difficult achievement. But like the Seabees say: “The difficult we accomplish at once; the impossible takes a bit longer.”