This Recruit Just Became The 7th Marine In His Family

For Sean G. McCool, the Marine Corps is synonymous with family. Not only did he enlist and gain a platoon... 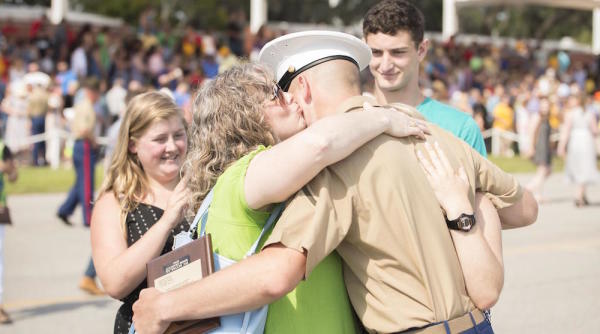 For Sean G. McCool, the Marine Corps is synonymous with family. Not only did he enlist and gain a platoon of brothers, he joined his father, brother, and a bunch of other kin to become the seventh person in the McCool family to have proudly served the Corps, dating all the way back to 1925.

A Sharpsburg, Georgia native, McCool didn’t just shuffle off to Parris Island to fulfill the family’s destiny, according to a stirring Defense Department news story by Lance Cpl. Joseph Jacob. Instead, he hit the ground running.

McCool “took charge and did everything in his power to assist those around him who needed help,” Jacob writes. “His initiative would not go unnoticed by his superiors, and he was designated as guide of Platoon 2044.”

From the second he arrived on the white bus as a recruit to the day he walked off the parade deck toward his cheering family in the stands, he knew he was meant to be a Marine.

“I have always been around Marines since I was little,” McCool said. “The two things they taught me that got me ready for this was to respect authority and never accept my current limits.”

McCool’s senior drill instructor, Staff Sgt. Devon A. Luevano, told Jacob that when pressed by the DIs during training to dish on his squadmates for their repeated failures, McCool “blamed only himself.”

Luevano said he had never seen a recruit take personal responsibility for the group’s failures so directly. But as platoon guide, McCool felt it was only right.

“That was the honest answer I always wanted to hear from a recruit,” Luevano said.