Boy With Heart Condition Gets Wish To Become A Marine

Twelve-year-old Nathan Aldaco was diagnosed with rare heart disease at a young age, but that hasn’t slowed him down. Last... 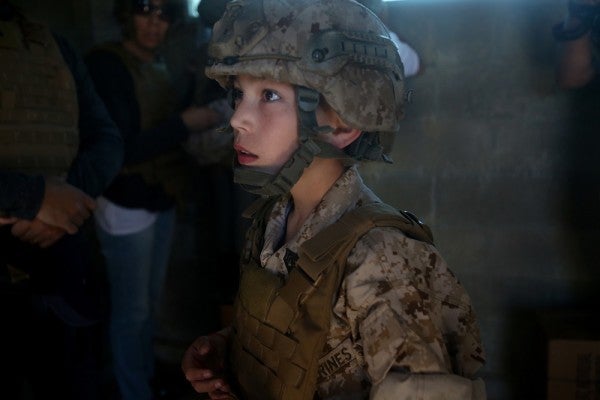 Twelve-year-old Nathan Aldaco was diagnosed with rare heart disease at a young age, but that hasn’t slowed him down. Last year, Nathan and his family were contacted by the Make-A-Wish Foundation, which asked Nathan to give a list of things he would like to do.

Topping Nathan’s list was to wear a uniform, ride in large military vehicles, be a part of a medal ceremony, and train with Marines. according to a Department of Defense press release.

In short: He wanted to be a Marine.

On March 24, at Marine Corps Base Camp Pendleton, Nathan had the chance to do just that when Marines with 7th Engineer Support Battalion welcomed Nathan as an honorary devil dog.

At the end of the day, Nathan was awarded the Master EOD badge, a distinguished award in the EOD community typically issued after 7 to 15 years of service.

“It was a great opportunity,” said 1st Lt. Ernesto Gaudio, a platoon commander with Bravo Company, 7th Engineer Support Battalion. “First of all it was good for Nathan. I hope it was also good for the Marines. I think it touched a lot our hearts. I will certainly never forget today or Nathan and his family. I got emotional at the end but, hey, we are human beings. We are Marines but we are human.”

When asked what his favorite part of the day Nathan said, “The bombs were cool. I like working with the robots. It was fun controlling them and picking stuff up with them.”