Paul Douglas went to Marine boot camp at 50. Then he earned a Bronze Star and 2 Purple Hearts in WWII

When he was wounded, he took off his rank insignia so he wouldn't receive special attention. 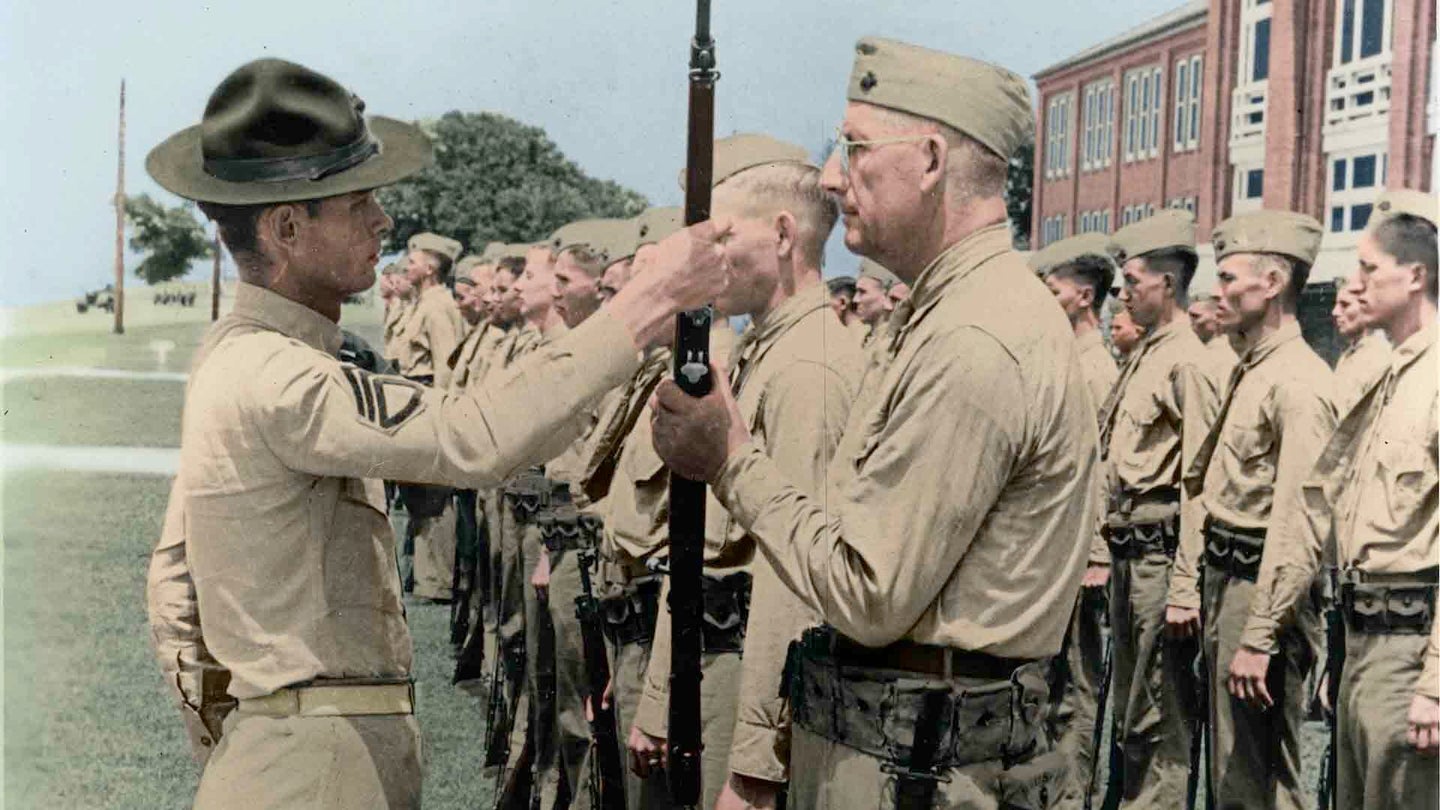 Pvt. Paul Douglas, age 50, preforms a rifle inspection with his drill instructor aboard Marine Corps Recruit Depot S.C., 1942. Douglas, at age 50 was the oldest recruit in the history of Parris Island, and went on to become a purple heart recipient and Chicago senator.(Marine Corps photo.).
SHARE

Even among the extraordinary generation of Americans that won World War II, Paul Douglas stands out as a legend.

At 50 years old, Douglas arrived at Marine Corps Recruit Depot Parris Island in 1942 to begin boot camp. The economics professor was more than twice as old as the average Marine recruit and Douglas remains the oldest recruit to pass through Parris Island.

“I found myself able to take the strenuous boot camp training without asking for a moment’s time out and without visiting the sick bay,” Douglas later wrote about his experiences.

Initially, Douglas was assigned to the personnel classification section of Parris Island after becoming a Marine, but he was not content with the idea of writing training manuals for the rest of the war, so with the help of his good friend Frank Knox, who was serving as Navy Secretary, Douglas became an infantry officer.

Douglas was commissioned as a captain after spending just seven months as an enlisted Marine and then he shipped out to the Pacific, where he fought in some of the bloodiest battles of the war.

In late 1944, Douglas served with the 3rd Battalion, 7th Marine Regiment during brutal combat on the small Pacific island of Peleliu. Commanders expected the island to be captured in a matter of days, but the bitter fighting lasted more than two months, providing a preview of how tenacious the Japanese resistance would be in later battles.

Douglas, who was serving as a division adjutant, had been allowed to take part in the invasion on the condition that he stay away from combat, yet he routinely volunteered to be a stretcher bearer to evacuate wounded and fallen Marines from the frontlines, Howard Shuman wrote in a 1979 profile of Douglas for Challenge, an economics magazine.

During one of his trips to the front, Douglas saw that the Marines desperately needed a flamethrower and ammunition for rocket launchers, so he grabbed what was needed and braved heavy mortar and small arms fire to deliver it to the front lines.

He was eventually awarded the Bronze Star for his actions helping those Marines, but the battle went on and Douglas also received his first Purple Heart after being wounded by shrapnel.

At one point in the battle for Peleliu. Douglas killed a Japanese sniper hiding in a cave, after the shooter had killed two fellow Marines. He described his thoughts afterward in his 1972 autobiography, “In the Fullness of Time.”

“As I came out, covered with mud and blood, the thought went through my head that perhaps the fellow was a professor of economics at the University of Tokyo,” Douglas wrote. “What a world it is that causes each of us to seek the other’s life.”

By the end of the battle, 1,336 Marines had been killed and another 5,450 were wounded. The Army’s 81st Infantry Division also lost 196 soldiers, who were killed in action.

As a leader, Douglas was credited with putting his men first. Shuman wrote how during one battle, a Navy corpsman refused Douglas’ order to treat wounded Marines who were under heavy fire.

“He said he was a Harvard Medical School graduate with training too valuable to risk his life,” Shuman wrote. “Incensed by his refusal, Douglas took out his weapon, pointed it at the doctor’s head, and marched him to the front lines. Years later he told me he still shuddered when he thought about it: he had been so outraged that he had been prepared to shoot the man if he refused again.”

Douglas would also routinely pick up garbage so that enlisted Marines would not have to do so, and he refused to skip ahead to the front of the chow line, according to the Marine Corps.

When Douglas was shot in his left forearm during the battle of Okinawa, he took off his rank insignia so that corpsmen would not see that he was a major and prioritize him over the enlisted troops who were wounded.

“If I live to be 100 years old, I will never forget this scene,” Marine Pfc. Paul E. Ison later recalled. “There, lying on the ground, bleeding from his wound was a white-haired Marine major. He had been hit by a machine gun bullet. Although he was in pain, he was calm, and I have never seen such dignity in a man. He was saying ‘Leave me here. Get the young men out first. I have lived my life. Please let them live theirs.”

Following his second combat injury, Douglas spent 14 months in hospitals and left the Marine Corps in 1946 as a lieutenant colonel. His wound at Okinawa cost him the use of his left hand, which he described as a “paperweight.”

After the war, Douglas served in the U.S. Senate for 18 years, where he was a champion of Civil Rights legislation. He is credited with bypassing the chairman of Judiciary Committee from Mississippi to allow the Senate to vote on a 1957 civil rights bill.

He died in 1976 at the age of 84. The year after his death, the Douglas Visitors Center at Parris Island opened in his honor.

“Later in his life many honors came to my husband,” his widow Emily Douglas said at the time. “But there is none that would have so touched him, made him so astonished as well as thrilled, as having his name associated here at Parris Island.”