Seeking care is a sign of strength, not weakness. 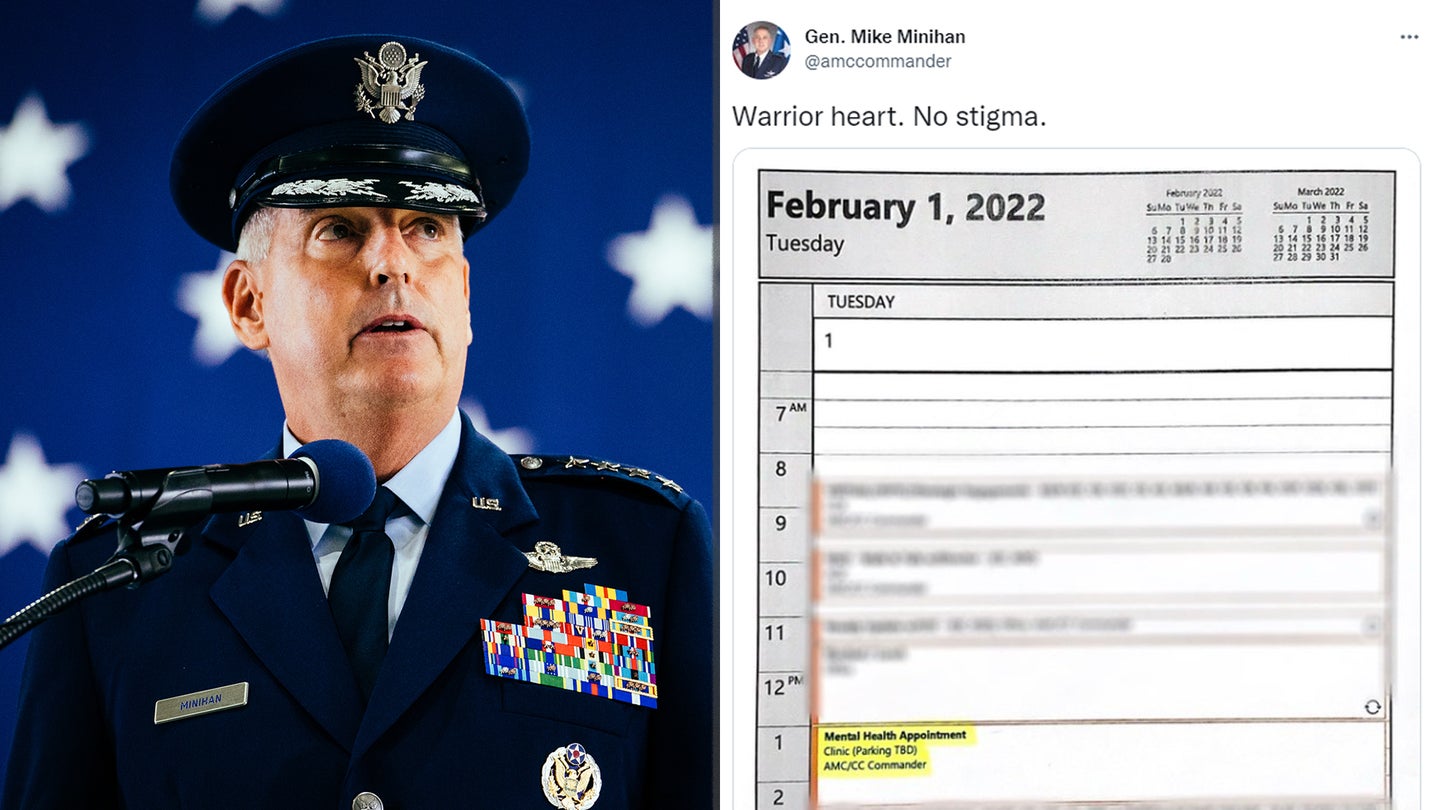 On Jan. 28, 2020, Air Force Gen. Mike Minihan took to Twitter to publicly share that he had an upcoming mental health appointment, along with the words 'Warrior heart. No stigma.' (U.S. Air Force photo by Airman 1st Class Isaac Olivera/Screenshot via Twitter).
SHARE

The four-star general in charge of Air Mobility Command has announced that he has an upcoming mental health appointment to let service members know that seeking care is a sign of strength, not weakness.

Air Force Gen. Mike Minihan recently shared on social media that his appointment is scheduled for 1 p.m. on Tuesday. Minihan tweeted a photo of his calendar along with the words: “Warrior heart. No stigma.”

“I’m only holding myself accountable to the same standards I expect from the amazing airmen and families that surround me,” Minihan told Task & Purpose on Monday. “Mental health is simply health. There can be no stigma in my headquarters, command, or family. Warrior Heart is leadership. Warrior Heart is fine tuning mind, body, and craft to ensure individual and team readiness. It’s a wingman and warfighting imperative necessary to win.”

With his tweet, Minihan is taking aim at a pervasive belief within the military that service members are at fault for their mental health issues, or that seeking help rather than toughing it out, is a sign of weakness.

The stigma surrounding mental health in the military is a longstanding issue. The Army is currently reviewing the cases of thousands of soldiers who were given other than honorable discharges for misconduct that was later attributed to service-related mental health conditions, such as Post Traumatic Stress Disorder.

Meanwhile, the military continues to grapple with a suicide crisis that has only gotten worse in recent years. A June 2021 study found that 30,177 active-duty service members and veterans had died by suicide since Sept. 11, 2001 – more than four times the number of troops who have been killed in Iraq and Afghanistan. Meanwhile, the suicide rate among active-duty troops rose 41% from 2015 to 2020.

Other military leaders have also encouraged troops to seek help if they are feeling overwhelmed. Sgt. Maj. of the Army Michael Grinston tweeted in November 2020 that soldiers can send him direct messages “on days you’re drowning inside your own head.”

Grinston added that while no one wants to be seen as “weak” or a “problem,” getting help for mental health issues is no different from any other form of self-improvement.

“We don’t judge soldiers for going to a gym to get stronger, a financial counselor to start an investment account, a church to become more spiritual, a mechanic to tune up their car, enrolling in college, etc.,” Grinston tweeted. “And we SHOULDN’T judge them for seeking behavioral health, either.”

Yet the stigma surrounding mental health issues in the military remains strong. In December, the Air Force fired an officer who had served separation paperwork to an airman who was checked into a mental health clinic after he attempted suicide.

In January 2021, Chief Master Sergeant of the Air Force JoAnne Bass said she was looking into an incident in which an airman received a Letter of Reprimand for allegedly stealing a catheter needle that the airman used in a suicide attempt. That same airman reportedly received a Letter of Counseling for showing up to work 7 minutes late on the day after the attempt.

Former Army Capt. Meaghan Mobbs applauded Minihan’s effort to destigmatize mental health care, but she also said the military needs to do a better job at getting noncommissioned officers and other influencers to encourage junior enlisted service members to get the mental healthcare they need.

Mobbs, a postdoctoral researcher with the Resilience Center at Columbia University’s Teachers College, said that when Army Gen. Stanley McCrystal led the 75th Ranger Regiment, his initial effort to get his soldiers to include martial arts in their training failed to catch on. It turned out that the soldiers tasked with training others lacked the rank and experience to persuade their formations to embrace the new program.

“It wasn’t until the true formation influencers – respected NCOs – went and brought it back, did it get truly ingrained,” said Mobbs, who is also executive director of Save Our Allies. “This is a bit of apples to oranges, but my point is this cannot be solely driven from a single direction, and I think the military has done a poor job of identifying network influencers.”

Beyond concerns of being ostracized, many service members fear that seeking mental health care will have an adverse impact on their career, Brock said. For example, a common concern among troops is that they will lose their security clearance if military clinicians inform their commanders that they have a mental health condition.

“Rather than risk this possibility, service members often avoid MH [mental health] counseling and use chaplains instead, who are not allowed to report conversations due to confidentiality,” Brock said.

Still, it certainly helps to have a four-star general encourage troops to get help, should they need it. It may not remove the stigma entirely, but it’s a good start.

UPDATE: This story was updated on Jan. 31 with comments from Air Force Gen. Mike Minihan.