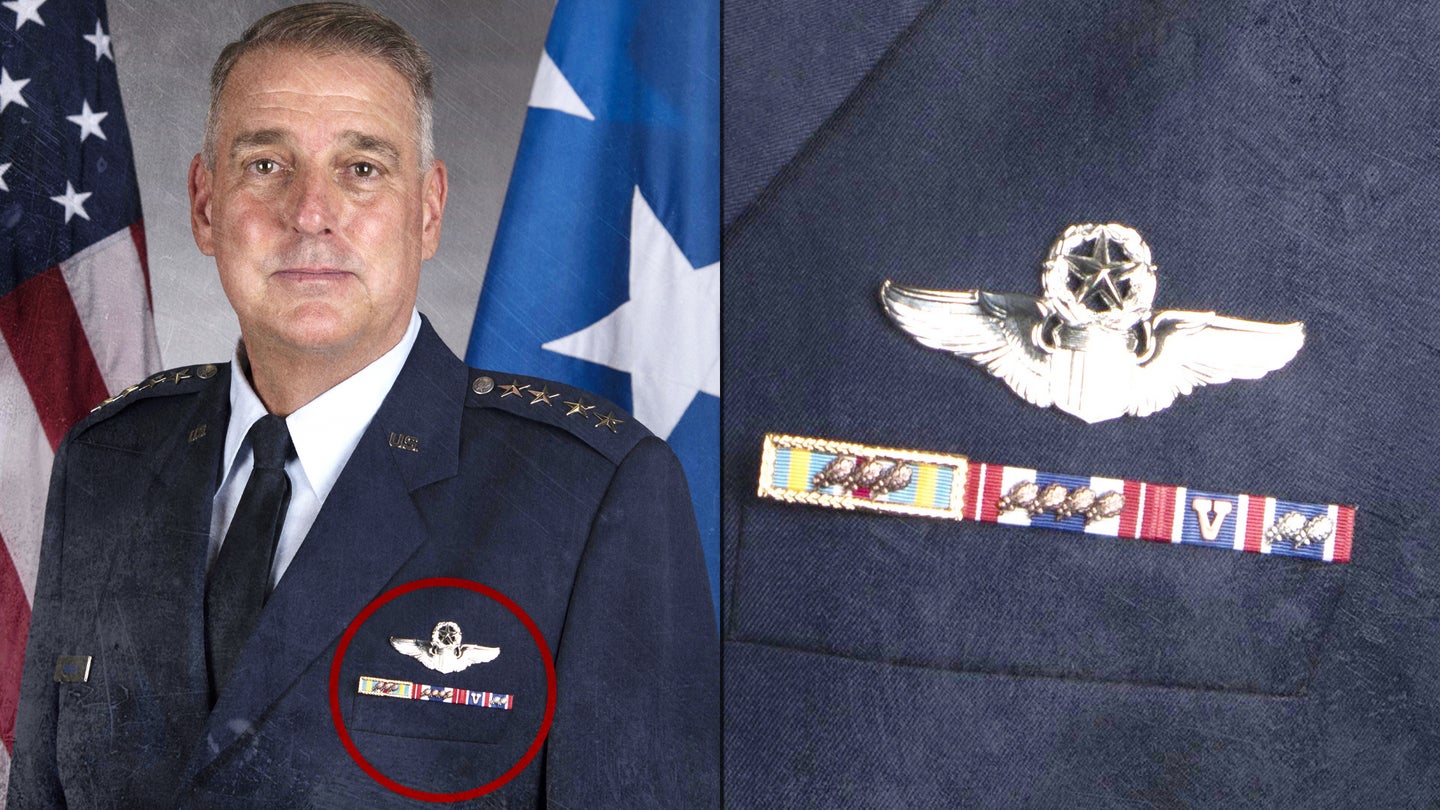 If you know anything about generals, you know that they typically sport a lot of ribbons on their dress uniforms. These strips of colored fabric, sometimes referred to as “chest candy” by service members, represent accomplishments achieved over one’s career. So when someone walks into a room with a chest that looks like it’s covered in paint swatches from a hardware store, it sends a message that they’ve “been there” and “done that.”

But sometimes what awards you choose to showcase speaks far louder than how many you’ve earned.

That’s what stood out to airmen when Air Force Gen. Mike Minihan, the brand-new commander of Air Mobility Command, took nearly all of his 32 ribbons off his uniform for his most recent official service photo. Of those 32 ribbons, Minihan left only three on his chest, all of which were unit-based, rather than individual awards. One of Minihan’s public affairs officials said the general’s intent was to signal his commitment to team accomplishments over individual glory.

“Gen. Minihan’s decision to wear these three ribbons is in accordance with AFI 36-2903 guidance to wear ‘all or some’ [ribbons], and the some he selected aligns with his team-focused leadership approach,” Lindsey Wilkinson, the deputy director of public affairs for Air Mobility Command, told Task & Purpose.

The spokeswoman said Minihan started wearing fewer ribbons on his service dress uniform during his stint as deputy commander of U.S. Indo-Pacific Command from 2019 to 2021.

“Gen. Minihan opted to reduce the number of decorations he wears on his service dress at certain events including retirements and promotions that honor others,” Wilkinson said. “He believes that the event should not be about him or his accomplishments, but the member he is there to honor or recognize.”

Though his command profile doesn’t list each of his 32 ribbons, it says Minihan has received three Legions of Merit, six Air Medals, seven Aerial Achievement Medals, the Republic of Korea Cheonsu Medal, awarded by the President of South Korea for “outstanding meritorious services in the interest of national security,” and the Order of Saint Maurice, which is given to people who have “demonstrated a significant contribution in support of the Infantry,” according to the National Infantry Association.

Minihan’s decision may appear to be little more than a unique wardrobe choice for a four-star general, but it struck an immediate chord on social media, particularly in circles frequented by current and former service members.

“Mini is hands DOWN one of the most amazing officers this Air Force has,” said one commenter reacting to a post about Minihan’s ribbon count on Reddit. The comment received 221 points, meaning hundreds of onlookers shared the commenter’s opinion.

“This man 100% takes care of his airmen,” the commenter continued. “I am so thrilled he has this job. He’s going to knock it out of the park.”

“He’s the epitome of a hard charging [tactical airlifter,” said another. “Undoubtedly one of the best leaders I ever got to work for. This is such a win for AMC.”

One airman who worked in aircraft maintenance at Dyess Air Force Base, Texas and as a flight engineer at Little Rock Air Force Base, Arkansas when Minihan was there, told Task & Purpose that Minihan “was always approachable, you never felt like you had to be on edge around him.”

The four-star general “always truly made you feel as if you were the only person that mattered at that moment when the two of you spoke,” said the airman, who stayed anonymous because they were not authorized to speak with the press.

“You could see the weight of being a commander lift when he strapped in and took control of the aircraft and he always wanted to know about young crew members he hadn’t flown with before,” the airman said.

“He would ask where you were from, how long you’ve been flying, if you had kids, a wife, etc,” the airman said, referring to Minihan’s service as a pilot of C-130 Hercules, KC-10 Extender and C-32 transport aircraft.

Other commenters described Minihan as “a stand up guy,” a “level-headed dude,” and a “pretty awesome commander.” It’s rare praise on the Air Force subreddit, where service leadership is routinely criticized. One airman who said they had a mental health breakdown during a large-scale training exercise remembered Minihan handing off responsibility for the exercise to a lower-ranking commander so he could check in on the airman.

“Report got back up to him that one of his airmen was in distress and he dropped the whole [operational readiness exercise] on the [operations group commander] and sprinted to where I was, to make sure I was okay,” the airman posted on Reddit. “I would follow Mini anywhere. I envy all of AMC, and wish I could go work for him again.”

If all this praise sounds excessive, remember that the Air Force, like many of its sister services, is struggling with a mental health and suicide crisis that many airmen attribute to poor leadership. Minihan’s efforts to step up for his airmen made an impact, and for someone as high up in the military food chain as a four-star general to drop his individual ribbons further emphasizes that commitment.

Air Mobility Command will need that kind of leadership going forward. The command provides the airlift, aerial refueling and aeromedical evacuation to keep the rest of the military fighting around the world. Earlier this year, the command made headlines for its key role transporting 124,000 people out of Afghanistan during the last days of the 20-year American war there. As the U.S. military prepares to fight over vast distances in a possible future conflict with China, the command also has to contend with a complete boondoggle of an acquisition process for its next aerial refueling tanker, which the military desperately needs because the current fleet is falling apart.

No matter how he plans to tackle those challenges, Minihan seems to want to do it in a particular way: together with his airmen. As Wilkinson put it, the general “believes any success he has had is a reflection of the Airmen and Joint Service members he’s had the privilege to lead and serve alongside over his 32 years of service.”