Vietnam War Army Pilot To Receive The Medal Of Honor 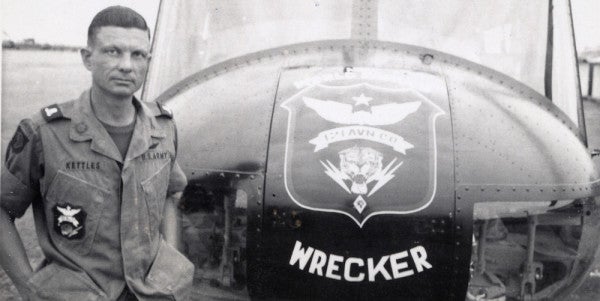 President Obama will award retired Army Lt. Col. Charles Kettles the nation’s highest award for heroism for saving 44 American soldiers during a May 15, 1967 enemy ambush in the Vietnam War.

On Monday, July 18, 2016, Kettles is scheduled to receive the Medal of Honor for conspicuous gallantry for his actions while serving as a flight commander assigned to 176th Aviation Company (Airmobile) (Light), 14th Combat Aviation Battalion, Americal Division.

“Then-Major Kettles distinguished himself in combat operations near Duc Pho, Republic of Vietnam, on May 15, 1967,” according to a June 21 White House press release. “He led a platoon of UH-1Ds to provide support to the 1st Brigade, 101st Airborne Division, during an ambush by a battalion-sized enemy force.”

After leading several trips to the hot landing zone and evacuating the wounded, he returned, without additional aerial support, to rescue a squad-sized element of stranded soldiers pinned down by enemy fire. Kettles is credited with saving the lives of 40 soldiers and four of his own crew members, according to the press release.

Kettles was born in Ypsilanti, Michigan on Jan. 9, 1930. He was drafted into the Army at age 21 while enrolled in Michigan State Normal College (now Eastern Michigan University) where he studied engineering.

Upon completion of basic training at Camp Breckinridge, Kentucky, Kettles attended Officer Candidate School at Fort Knox, Kentucky, and earned his commission as an armor officer in the U.S. Army Reserve, Feb. 28, 1953. Kettles graduated from the Army Aviation School in 1954, before serving active duty tours in Korea, Japan and Thailand.

Kettles volunteered for active duty in 1963. He attended Helicopter Transition Training at Fort Wolters, Texas in 1964. During a tour in France the following year, Kettles was cross-trained to fly the famed UH-1D “Huey.”

In 1966, Kettles was assigned as a flight commander with the 176th Assault Helicopter Company, 14th Combat Aviation Battalion, and deployed to Vietnam from February through November 1967. His second tour of duty in Vietnam lasted from October 1969, through October 1970.

In 1970, Kettles went to Fort Sam Houston in San Antonio, Texas, where he served as an aviation team chief and readiness coordinator supporting the Army Reserve. He remained in San Antonio until his retirement from the Army in 1978.

After leaving active duty, Kettles established a Ford dealership in Dewitt, Michigan, and continued his service with the Army Reserve as a member of the 4th Battalion, 20th Field Artillery.

Kettles completed his bachelor’s degree at Our Lady of the Lake University, San Antonio, Texas, and earned his master’s degree at Eastern Michigan University, College of Technology, in commercial construction.

He went on to develop the Aviation Management Program at the College of Technology and taught both disciplines. He later worked for Chrysler Pentastar Aviation until his retirement in 1993. Kettles currently lives in Ypsilanti, Michigan, with his wife Ann.