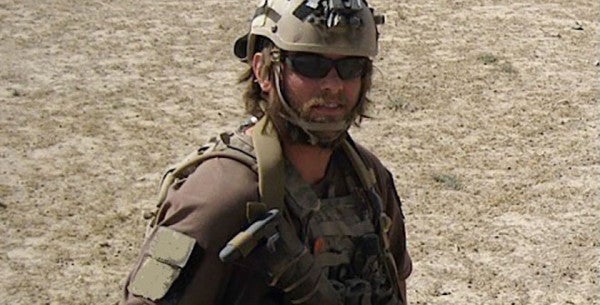 President Obama has just awarded the Medal of Honor to Navy Senior Chief Special Warfare Operator Edward C. Byers Jr. for his heroic actions during a nighttime raid in Laghman Province, Afghanistan in 2012. The White House ceremony took place on the morning of February 29th.

Byers, 36, is the 11th living service member to receive the Medal of Honor — the nation’s highest award for valor — in Afghanistan. A member of SEAL Team 6, Byers is the sixth SEAL to ever earn the Medal of Honor, and the first living SEAL recipient since the Vietnam War.

During the ceremony, President Obama quoted the Navy SEAL Ethos: “In times of war or uncertainty there is a special breed of warrior ready to answer our Nation’s call. A common man with uncommon desire to succeed. Forged by adversity, he stands alongside America’s finest special operations forces to serve his country, the American people, and protect their way of life.” He then added: “Senior Chief Ed Byers Jr. is such a man.”

On the night of Dec. 8, 2012, Byers and his fellow SEALs were on a mission to rescue Dr. Dilip Joseph, an American citizen, who was being held hostage by the Taliban in a remote district east of Kabul, according to a Navy news release.

Joseph, an aid worker, had been abducted along with his driver and interpreter on Dec. 5, 2012. U.S. commanders, fearing the doctor would soon be either transferred to a new hideout or killed, ordered the rescue attempt.

The mission began with a four-hour journey by foot over mountainous terrain, according to the Washington Post. After the team’s pointman, Petty Officer 1st Class Nicolas D. Checque, shot a Taliban guard who spotted the SEALs, the team was drawn into fierce close-quarters combat in the small building where Dr. Joseph was being held.

Checque, 28, was fatally wounded by AK-47 fire immediately after entering the room. Byers was second through the door. He engaged multiple Taliban guards before identifying Dr. Joseph and flinging himself over the hostage to shield him from the rounds flying across the room.

“Almost simultaneously, Chief Byers identified an additional enemy fighter directly behind Dr. Joseph. While covering the hostage with his body, Chief Byers was able to pin the enemy combatant to the wall with his hand around the enemy's throat,” the Navy summary said. Byers’ teammates then killed the guard with “precision shots.”

Joseph survived. He later described the harrowing ordeal in his book, “Kidnapped by the Taliban: A Story of Terror, Hope and Rescue by SEAL Team 6.” Checque, whom Byers and his teammates attempted to resuscitate on the 40-minute helicopter flight back to Bagram Air Field, was posthumously awarded the Navy Cross, according to the Washington Post.

“I was lucky. I made it out with very few scratches, and Nic Checque didn’t,” Byers told the Washington Post. “He made the ultimate sacrifice. But there have been a lot of our brothers who have made the ultimate sacrifice, and they died like warriors die. I would like to think he would do that all over again. Very few people can say they died doing something they love, and he’ll forever be remembered in the pages of history as being a truly great hero.”

Watch coverage of the White House ceremony here (begins at 27:20).