Editor’s Note: This article was originally published on Fatherly, a digital lifestyle guide for men entering parenthood. Pools can be... 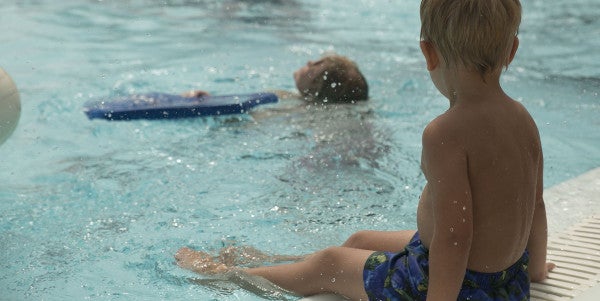 Pools can be dangerous for infants and intimidating to toddlers, so your job is to get them comfortable with the water without terrifying them. For our latest 940 Saturdays piece on how to maximize family free time, we spoke to two guys familiar with kids and water. Judson Kauffman spent eight years in the Navy SEALs before swim training potential SEAL recruits, and Earl Walton is a triathlete competitor and coach with 20 years of experience getting people to take the plunge.

First, never take your eyes off a kid in or near a pool. This is common sense, but it's also exhausting and an easy mistake to make because as your kids learn, you'll get over confident. Second, screw floaties. “It gives kids a false understanding of physics,” says Kauffman. “When a kid without floaties jumps into a pool as if he has them, he just sinks and doesn't understand why. I see that all the time.”

Getting kids in the water early is the same thing as exposing them to a new language early — something that would otherwise seem foreign becomes second nature. Most organized parent/child swim classes start at six months, but Kauffman's mom had him in the backyard pool at three months old (and all he did was go from Marco Polo to naval warfare special ops). Walton, who started his two boys at four months, says there wasn't much in the organized classes that he couldn't do himself at the local Y, where he didn't have to pay $40 a pop for the privilege. “Maybe do it for a few weeks when you're a new parent, but then you don't really need to go back,” he says. “Now, I'm in the pool, I know all the songs and the games, it's more enjoyable.”

As your kids become more comfortable in the water, it's all about encouraging them. “It's like when they're in the park and jump off a two-foot rock. You know they're fine, but that was an adventure for them,” says Walton. He points out that a lot of parents are too scared to let go of their kids in the water, but that process of having their head dip under and then feeling it come back up under their own power is crucial to building their confidence. “You want them feel like they've cheated danger. That empowers them.”

You also want your kid to be best friends with the pool wall, which is why Walton plays a lot of games of “Spiderman,” or moving sideways along the wall toward the steps or ladders. To keep things interesting, he'll present himself as an obstacle to clamber around. If you want to keep things really interesting, wear a Green Goblin mask.

Blowing bubbles is the first building block of breath holding, because it gets their faces in the water without water going up their noses. Once they master that, Kauffman likes to play a game where he holds a toy just beneath the surface and encourages them to go get it. Each time, the toy gets a little further under, but since the kids just want to save Batman, they don't even realize it. “Before you know it, they're going 3 feet deep with a 10-second breath hold,” he says.

Before trying to teach any proper swim strokes in the pool, Walton pays careful attention outside of it. “It's a dexterity thing,” he explains. “Once they can use a spoon at dinner, they can probably learn to swim.” His two-year-old still drops things while walking around, which tells Walton he's not ready to coordinate his movements in the water; his older son learned the basics of kicking at age four. First: Walk and chew gum at the same time; second, learn crawl stroke.

“Psychologically, a child has to want to be in the water. Forcing them won't help; if something looks fun to a kid, he'll want to do it, too,” says Kauffman. What he means is that for kids who are scared of the water, it's incumbent on parents to show them why it's worth facing their fears. To distract them from their anxiety, get their attention while you're in the pool playing with water guns or floating on a little raft so they understand what they're missing. It might take a few trips, but eventually they'll be too focused on playing “dunk the dad” to remember that the pool was clearly going to kill everyone just 24 hours ago.

Walton finds that swim goggles help kids get comfortable in the water more quickly because it's one less thing that's disorientating for them underwater. He put them on his kids as soon as they stopped squirming long enough to keep them on, around age two. He's also a big fan of the Toypedo, a kind of submerged football that encourages breath holding through games of underwater catch.

This article, “A Navy SEAL And An Ironman Triathlete On Teaching Your Kid To Swim,” originally appeared on Fatherly.