The Reason Fort Polk Needs To Get Rid Of 700 Horses

Louisiana’s Fort Polk, home to the Army Joint Readiness Training Center, has amassed an unsustainable and dangerous population of feral... 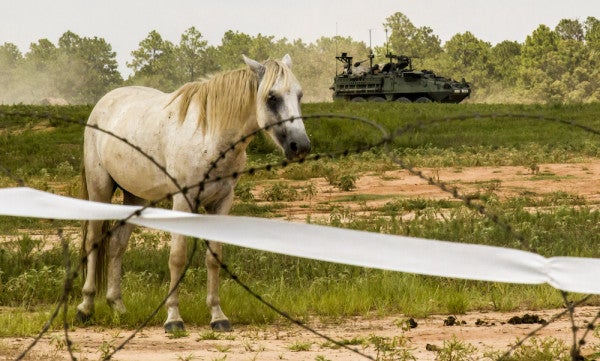 Louisiana’s Fort Polk, home to the Army Joint Readiness Training Center, has amassed an unsustainable and dangerous population of feral horses — more than 700 of which now roam free around Army facilities.

Although it has been suggested that they descend from World War II Cavalry horses, garrison historians have disproved that information, suggesting that many horses have been abandoned by locals beginning around 1993.

In an interview with Task & Purpose, Col. David Athey, Fort Polk's garrison commander, said that because of financial hardship, “people were just basically abandoning their horses here around Fort Polk.”

As a result, when an inquiry was made, the U.S. District Court for the Eastern District of Louisiana determined the horses to be “trespass livestock.” And because they have been deemed as such, the “Wild Free Roaming Horses and Burros Protection Act of 1971,” which typically protects wild, free-roaming horses and burros on public lands, does not apply to them.

So when these feral horses began to interfere with training exercises that put their safety, and the safety of soldiers and military equipment in danger, an official Army environmental assessment was commissioned.

Prior to the assessment, a statement released in August 2015 by JRTC and Fort Polk said, “The population of trespass horses that remain on the training landscape imposes a safety conflict with training activities. This safety risk is unacceptable for troops, Army equipment, and the horses themselves.”

And Athey suggested that the environmental assessment proved just how critical the situation has become.

“This is what I’d underscore most importantly in why we’ve taken action is the fact that these horses are a risk to our mission here — specifically JRTC,” Athey said. “In our analysis, to address the commanding general’s concerns … we determined that there was significant enough risk that there might be a horse strike to the rotary-wing and the fixed-wing assets that routinely train here.”

Completed in early August 2016, and coming in at a whopping 1,003 pages, the assessment discusses everything from equine lineage, to solutions, to public comments — all of which were taken into consideration by Brig. Gen. Gary M. Brito, commanding general of JRTC and Fort Polk.

And the ever-growing number of horses found at Fort Polk will continue to be more and more detrimental to training operations, both financially and safety-wise.

If a herd of horses prevents safe landing operations or even impedes take-off when an operation was planned, it comes at a hefty price. The amount of money it costs to run various missions using certain equipment can cost millions. And in an era where every dollar counts, the situation cannot go unaddressed, Athey added.