Imagine you’re a kitten living in war-torn Syria. You’re cold and hungry. It’s been days since you’ve had a mouse... 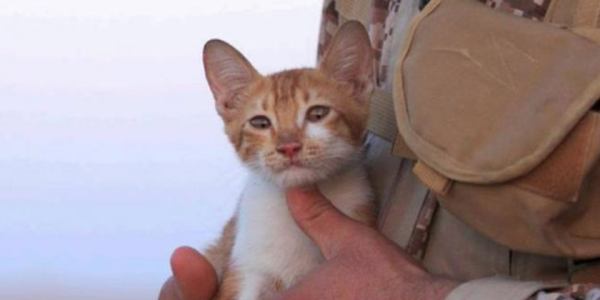 Imagine you’re a kitten living in war-torn Syria. You’re cold and hungry. It’s been days since you’ve had a mouse or a bowl of milk. Then, one morning, you’re approached by a bearded man in body armor. He beckons you. “Come,” he says. So you go. Maybe he has food. You crawl into the man’s arms and someone snaps a photo. Three years later, your image appears in the glossy pages of Dabiq, a periodical magazine produced by the Islamic State to recruit Westerners into its ranks. Congratulations. You’ve just become the whiskered face of global jihad.

We’ll never know the true story of how a little orange tabby, whom we’ll call Whiskers, found its way into the ISIS propaganda machine, but, based on my extensive knowledge of kittens, I’m going to assume it happened just like that. The image was included in an essay written by Abul-Harith ath-Thaghri, who is supposedly the ISIS militant in the photo.

An ISIS militant cuddles a young kitten on the outskirts of Aleppo.Photo via Dabiq

Published in the latest issue of Dabiq, the story of Whiskers is one anecdote included in a lengthy diatribe entitled “Contemplate the Creation,” in which ath-Thaghri muses on life and love and Allah. Also featured in the issue is an article celebrating the recent attack in Orlando that claimed the lives of 49 Americans, and an essay arguing why ISIS represents true Islam under the headline “Why We Hate You and Why We Fight You.”

In ath-Thaghri’s telling, it was Whiskers who approached him, and not the other way around. According to the jihadist, it happened while he was on guard duty near Aleppo during the early days of the Syrian civil war.

“Suddenly something moved nearby, less than two meters away,” he writes. “It grabbed my attention, distracting me. I noticed it was a cat, cold like myself. It observed me for a few seconds as I observed it. It appeared to consider whether or not I was an aggressive or compassionate soul, then advanced towards me, leaped on my lap, and began purring.”

Had Whiskers been wearing a suicide vest we wouldn’t be having this conversation right now. He was not, and so ath-Thaghri was able to use him (or her!) as a puppet in a larger propaganda campaign to soften the Islamic State’s brutal image in the eyes of potential Muslim recruits.

In an interview with The Independent, Shiraz Maher, Deputy Director of the International Center for the Study of Radicalization at King’s College London, explained that ISIS is actually fond of using such imagery because the terrorist organization wants to be perceived as “an ordinary and typical state where the physics of everyday life ticks over like anywhere else in the world.”

“Islamic State has actually been messaging to Muslims, and particularly Arabs, for years with softer images; showing children in playgrounds, bustling market places, functioning hospitals and schools,” Maher said. “Images like this account for the majority of their propaganda.”

We can only hope that young Whiskers managed to escape the clutches of the Islamic State since that photo was taken. But given the group’s lengthy track record of extreme brutality, and also its complete disregard for even the most precious forms of life, like human children, it’s not likely. There is hope, however. On August 3, the Pentagon told the Associated Foreign Press that the ISIS units entrenched in the stronghold of Mosul are “weakening,” and that in the coming months Iraqi and Kurdish forces, backed by a U.S.-led coalition, will storm the city.