Fort Polk, home of the Joint Readiness Training Center in Louisiana, is overrun with more than 700 feral horses. Herds... 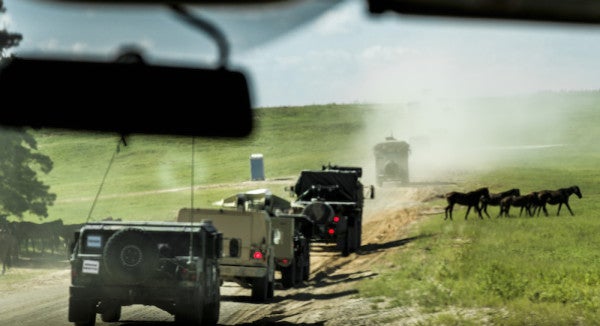 Fort Polk, home of the Joint Readiness Training Center in Louisiana, is overrun with more than 700 feral horses. Herds roam freely around the garrison and interfere with flight training, vehicle training, and live fire exercises, which has put soldiers and the horses themselves in danger.

In August 2015, when Fort Polk officials announced that the base would be seeking a plan to “eliminate” the horses, early speculation about what that meant took root, including public concern about the mass slaughter of these animals.

“Horses are not people but they still have the right to fair and humane treatment as living beings in this world. Their ancestors served the Army well. You owe them the chance at a good home instead of a horrible death in a slaughterhouse,” emailed one woman in response to the Army’s initial press release regarding the horses, which can be found in the Army’s environmental assessment.

Another concerned commenter added, “There must be no horse relinquished to kill buyers for shipment to slaughter. Injured or sick animals must be humanely euthanized by veterinarians. If good homes can be found through non profit rescue organizations the horses can be adopted through an approved process. We have never raised horses for food in this country and shipping them for this purpose is unacceptable to the American people.”

And while the options of small-scale use of euthanasia and sterilization were discussed by Army officials, killing all the horses was never considered, nor was selling them off to slaughterhouses.

What’s more, garrison historians debunked the myth that the horses’ ancestors were Army Cavalry during World War II, and instead suggested that most of the horses have been abandoned by locals beginning around 1993. Since then, their numbers have grown exponentially and short-term sterilization has done so much to curb their breeding.

Related: Here's The Reason Fort Polk Needs to get rid of 700 horses »

In an interview with Task & Purpose, Col. David Athey, Fort Polk’s garrison commander, said, “In our analysis … we determined that there was significant enough risk that there might be a horse strike to the rotary-wing and the fixed-wing assets that routinely train here.”

And after finishing the thorough 1,003-page environmental assessment to uncover the overall impact of the trespass horses, the Army arrived at a number of possible solutions earlier this month.

In all, garrison officials came up with seven possible courses of action, all of which are a combination of these choices: no action, giving them away, selling them, allowing them to be adopted, euthanizing them, and sterilizing them.

Within the assessment, hundreds of pages of public comments showed that most people favored the first course of action: no action at all — the horses should be allowed to continue to roam Fort Polk freely.

However, for the Army, this is not feasible. In order to conduct necessary training operations, the fields would need to be cleared. And the environmental assessment revealed that putting the horses in a fenced enclosure would cost more than $89 million, not including annual maintenance costs — money that the Army simply does not have.

Brig. Gen. Gary M. Brito, commanding general of commanding general of JRTC and Fort Polk, weighed all seven options against hundreds of pages of public comments before suggesting a particular plan: course of action seven, which allows Fort Polk to work with animal rights groups to put the horses up for adoption, give them away, sell them, and relocate them in groups of 10 to 30 until the horses are gone.

When the report was released on Aug. 8, the Army once again asked the public for comments, which can be found in the final pages of the assessment.

“Most comments were still telling us not to do anything, but there was quite a handful that supported the recommendation that [Brito] was considering,” Athey added.

The Army is still in the process of developing a list of animal rescue groups, which will be vetted before receiving any horses.

Some activists have expressed concern that there will be no vetting process for individuals attempting to acquire the horses; however, Athey added that responsibility does not fall under the Army’s purview.

According to the assessment, a majority of the horses should be relocated within three years, but there is no set deadline.