The Battle Of Toad Hall Is A Masterpiece Asymmetrical Warfare

Editor’s Note: A version of this article originally appeared on the blog of Angry Staff Officer. That sound? Oh, that’s... 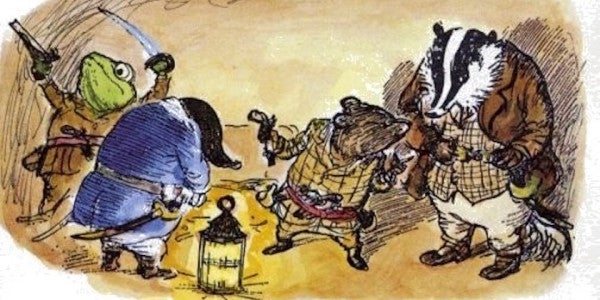 That sound? Oh, that’s just the clunking of heads hitting desks, as people react to their beloved childhood book being brought under the scrutiny of the military microscope. But really, we’d be doing an injustice to that mighty asymmetric warfighter, the Badger, if we neglected to share his courageous story with an entirely new generation of military strategists. “The Wind in the Willows” is not a military work by any means. But the Battle for Toad Hall bears noting, because Kenneth Grahame unwittingly factored in some key elements of small unit warfare.

So, if you’ve nothing better to do, let’s begin deconstructing a childhood favorite, shall we?

The situation – if you recall from when your parents read you The Wind in the Willows – is as follows. Two heavily armed factions – the Weasels and the Stoats – have undermined the local power in the region; namely, that of Toad and Toad Hall. While Toad was a fairly unsteady leader – investing at random in items that took his fancy – he remained the rightful leader of the region. The usurping powers were led by the Chief Weasel who used his connections with organized crime to help build an armed force that could overpower Toad Hall. Taking advantage of a time when Toad was absent, the Weasels and Stoats infiltrated the seat of power and established themselves as the new brokers in the region. The Weasels and Stoats were task organized into a garrison force and a sentry force. The garrison force was powerful, but was reluctant to leave the confines of their new base. It was mainly made up of Weasels. The sentry force consisted of Stoats which patrolled the outer cordon of Toad Hall and kept watch over main avenues of approach. Although originally paramilitary in nature, these two forces adopted militaristic overtones with conventional titles for their time in power. Both forces were heavily armed with rifles, although there was little to show that they had adequate training with them. The actions of the Weasels and Stoats destabilized the area and necessitated the mobilization of a strike force to retake Toad Hall and return the rightful leader to authority.

The opposing strike force was made up of representatives of different clans around the region. The Badger was the strike force commander, an expert in ground combat, and a sound strategist. The Mole was experienced in information operations and was an expert at subterranean warfare. The primary logistician for the strike force was the Rat, who was also well-versed in riverine operations. The fourth operative was the dispossessed leader himself – the Toad – who brought some local knowledge with him but was more often than not a liability to the strike force. The strike force was aided by sympathetic local nationals, such as the Otter. Outnumbered and outgunned, this small force maintained the advantage of maneuver while the Weasels and Stoats remained static inside Toad Hall. This last would be key to the success of the entire operation.

As we always do, we turn now to our warfighting functions.

Mission command is what drives the operations process; it gives mission, vision, and direction to subordinate commanders. The Chief Weasel managed mission command from his position within Toad Hall; however, he declined to use mission orders or adapt to the situation at all. After seizing Toad Hall, he gave up the initiative by reverting to his state as a politician. Throughout the entire operation, his main contribution was to make political speeches to buttress his coalition. This played directly into the hands of the Badger, who used his enemy’s weaknesses against him.

Badger utilized his knowledge of the local area and his inroads with the population to gather intelligence on his enemy. Badger was also aware of a secret avenue of approach via a tunnel that led directly into the command and control section of Toad Hall. Using this intelligence, he developed and briefed his plan to the strike force the night preceding the assault: they would move under cover of darkness along the river to the line of departure, insert via the tunnel bypassing the sentries, and then ambush their enemies when they were at their most vulnerable. He established strict rules of engagement (sticks only) as well as providing a time analysis (five minutes time on target). His swift assessment of the situation combined with agile mental leadership gave his strike force the edge over the more numerous and heavily armed enemy.

The Weasels and Stoats gave up their ability to maneuver in the face of the enemy by becoming tied to the key terrain they were defending, i.e., Toad Hall. Patrols of Stoats moved at random around the outer defenses, but did not pass their cordon.

The strike force moved out at night, using their natural ability to navigate along the river to disguise their movements. The Badger established the order of march: himself, then the Mole, followed by the Rat, with Toad in rear security. However, when entering the tunnel, the Toad managed to fall into the water, nearly compromising the entire operation. After a warning from the Badger, they moved out again. The Toad once again caused a snafu by rushing too quickly in the tunnel, leading Badger to think they were being assaulted from behind. The rapid actions of Mole prevented fratricide, and the Badger adjusted the order of march to put the more dependable Rat in rear security.

Once at the final line of departure in the side-room off the banquet hall, the Badger paused to verify that the Weasels were indeed distracted by their celebration. Hearing their propaganda – which was aimed at the Toad – he confirmed that they were indeed combat ineffective. At the given signal, Badger initiated the attack.

Using surprise and aggressiveness, the four members of the strike force threw the Weasels into complete chaos. The Toad redeemed himself by knocking out the Chief Weasel, while the other three secured the perimeter and began neutralizing the enemy combatants. The Weasels that did not escape out the window were secured, silenced, segregated, searched, safeguarded, and sped to the rear by the Mole, operating as a de facto military policeman. The operation took exactly five minutes, as the Badger had calculated. However, although the decisive operation to defeat the Weasels was completed, there were still patrols of heavily armed Stoats around the perimeter which could lock the compound down.

The Weasels and Stoats failed to ascertain the impact that their usurpation of authority would have on the local populace. The Badger recruited the Otter to gather animal intelligence on his opponents. The Otter used subterfuge and disguise to ascertain that the Weasels were going to be holding a celebratory event one evening, at which time only the sentinels on the exterior of the compound would be on duty. This was the intelligence that the Badger used to identify the perfect night to carry out his assault.

The strike force utilized psychological warfare to destabilize their opponents. The day before the assault, the Mole went undercover as a washerwoman to spread disinformation amongst the Stoats, disguising the true numbers of the strike force. He drastically oversold their numbers and warned that they would strike overland at several different points. He also took advantage of the cultural divide between the Stoats and Weasels, intimating that the Weasels were leaving the Stoats to face the real threats while they had their party. While the Stoats expressed scorn for this theory to the Mole’s face, later ANIMINT showed that they took the threat seriously and realigned their defensive forces to meet the rumored threat. It also took a toll on their morale and contributed to the cultural rift between the two parties. Once the raid occurred and the Weasels were seen fleeing, the Stoats dispersed and were no longer a force to be reckoned with. Superior use of intelligence aided the strike force in its ability to project its influence on a much larger force.

Although the Weasels and Stoats had direct fire superiority with their rifles, the strike force closed the distance so rapidly as to negate their effectiveness.

Sustainment refers to the logistics of supplying a military force, as well as caring for the medical needs of its members. The Rat played the role of logistician for the strike force, equipping all members from his own pre-positioned stocks of arms and equipment. Each combatant received a full combat load: a belt, a sword, a cutlass, a pair of pistols, a nightstick, several sets of handcuffs, combat lifesaver bags, and supplies of Class I and Class VI.

Protection is the warfighting function that refers to preserving the combat power of the force. The Weasels attempted protection through using cordons of armed guards. The strike force utilized secrecy and their information operations to preserve their force.

Using movement and maneuver, information operations, and superior use of intelligence, the strike force of the Badger, the Mole, the Rat, and the Toad were able to successfully overthrow a far stronger force and place the rightful authority back in power. By studying the small unit operations in “The Wind in the Willows,” leaders can gain valuable insight into irregular warfare.

This article, “The Battle Of Toad Hall Is A Masterpiece Asymmetrical Warfare,” was originally published on the blog of Angry Staff Officer.