Perhaps the goodest boy in the Army. 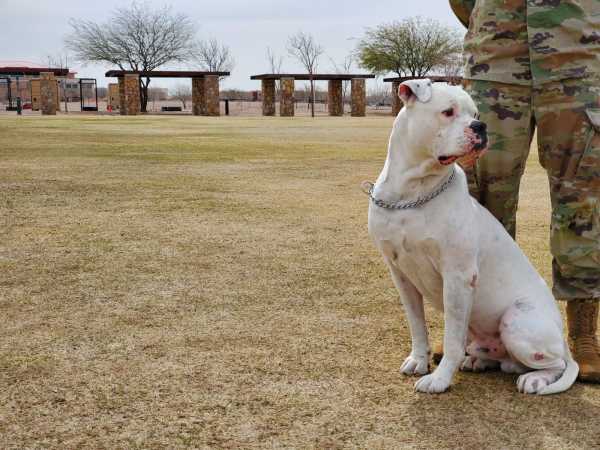 One of the newest soldiers at Fort Bliss came from a complicated home life. He arrived ready for the next chapter, and has quickly adjusted to life in the Army. He's 120 pounds, loves PT, and thrives off of attention.

In honor of National K9 Veterans Day on March 13, Task & Purpose got to hear all about Chester's life with the Bulldog brigade from his handler, Cpl. Mitchel Duncan, and CSM Derrick Braud.

Cooper Chester X, the 10th in a long line of other Chesters, joined the brigade and began basic training two weeks ago, Duncan explained. For him, that essentially means getting used to the soldiers around him and adjusting to his day-to-day.

It didn't take him long.

“Like anybody, whether they're a human being or a dog, the Army's a very particular environment that does take some adjustment,” Duncan said. “But with all the Chesters that I've handled, in almost no time at all it kind of clicks and makes sense to them … One day he just kind of walks in, and figures out that he owns the place.”

Chester does everything the other soldiers do (within reason). If they're exercising, he's exercising. If they're doing an event with the community, he likely is, too. If they're overseas, he may be joining them; his predecessor went to South Korea with the brigade.

Like his fellow soldiers, he sticks to a balanced diet to keep in top physical condition. Duncan said he's a “prioritized animal” at the vet center on Fort Bliss, and they prescribe him a “very specific diet.”

That diet does, of course, have to account for the many treats he gets throughout the day.

And, like many of the other soldiers, eventually he'll retire.

“We want to make sure that Chester is enjoying himself as much as the soldiers are,” Braud told Task & Purpose, adding that when they noticed he isn't as into the gig anymore, they'll find him a new home — typically, one with another soldier in the brigade.

“I would say it's probably going to be a competition to see who gets to be his adopted family after he gets finished serving,” Braud laughed. “I'm not aware of it being a problem in the past.”

The previous Chester, for example, retired with the former brigade sergeant major and moved to Hawaii, where he is surely experiencing the height of retirement bliss.

But for now, Chester is more than happy to spend the day with his Army family, and weekends with Duncan.

“He never leaves my side,” Duncan said.

The two enjoy “really, incredibly long walks” as Chester is high-energy in the morning, but in the afternoon, “he really enjoys lounging.”

The family he'd been with before helped work through the community to find him a good home, Braud said, and it seems like a perfect fit. The three-year-old bulldog craves attention, constantly — and lucky for him, there's absolutely no shortage of that with the brigade.

“I find it amusing when a big, stoic Army guy walks up, and then just melts and is like 'Oh who's a good boy' to the big bulldog here,” Duncan laughed.

Chester helps break up the monotony of day-to-day responsibilities for soldiers, brining some energy into any room he's in. Duncan said he has an “unbelievable ability to empathize with soldiers,” and thrives at comforting those around him when they need it.

“He will just walk over to a soldier and rest his 20-pound head on their lap,” he said. “And maybe they were having a bad day, but by the time they leave they aren't.”

Depending on the day, it seems, it may be unclear who rescued whom.