Sometimes, the traditional teeth-and-maw of the A-10 Warthog just doesn't cut it — you need a motherf*cking mustache to inspire fear 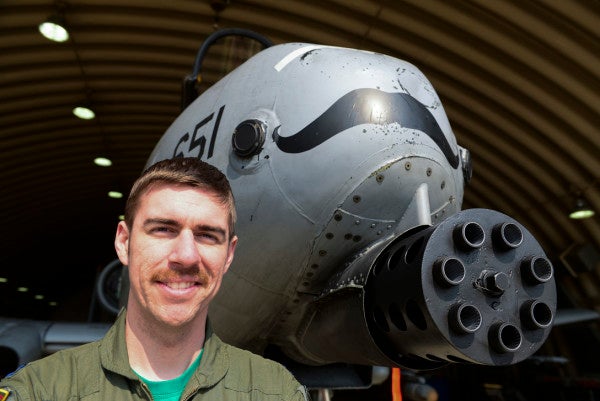 In the annals of modern warfare, there are few sights more iconic than the traditional war paint of the A-10 Thunderbolt II. When coupled with the recognizable BRRRT! of the aircraft's massive 30mm GAU-8 Avenger autocannon, the razor-sharp teeth and gaping maw of a Warthog's nose become a sigil of death and destruction, the clearest sign to targets on the ground that they are irrevocably, inevitably, f*cked.

But sometimes, the teeth-and-maw of the Warthog just doesn't cut it. Sometimes, to really inspire fear, you need a motherf*cking mustache.

For the A-10 Demonstration Team based out of Davis Monthan Air Force Base in Arizona, the standard paint job of the close attack aircraft is just another paint job, interchangeable with, say, the classic scheme of the World War II-era P-51 Mustang, according to a Wednesday tweet from Air Combat Command:

Hey @A10DemoTeam, I mustache you a question but I’ll shave it for later. ?

To be clear, this isn't the first time an A-10 has rocked the distinctive mustache paint job in honor of Mustache March, a month-long holiday I had no idea existed. Here's then-Capt. Sean Westrick with the 25th Fighter Squadron posing with his aircraft for the occasion back in March 2014:

Then again, one doesn't aways require a faux holiday to add some facial hair to the A-10's nose. Here's an A-10 assigned to the 190th Fighter Squadron rocking a mustache from its 2016 deployment in support of Operation Inherent resolve:

And then there's this bad boy from a Joint Base McGuire-Dix-Lakehurst air show in New Jersey back in May 2018:

Here's to you, mustachioed A-10s: you're certainly making close air support a classy-ass affair, one cheeky paint job at a time.