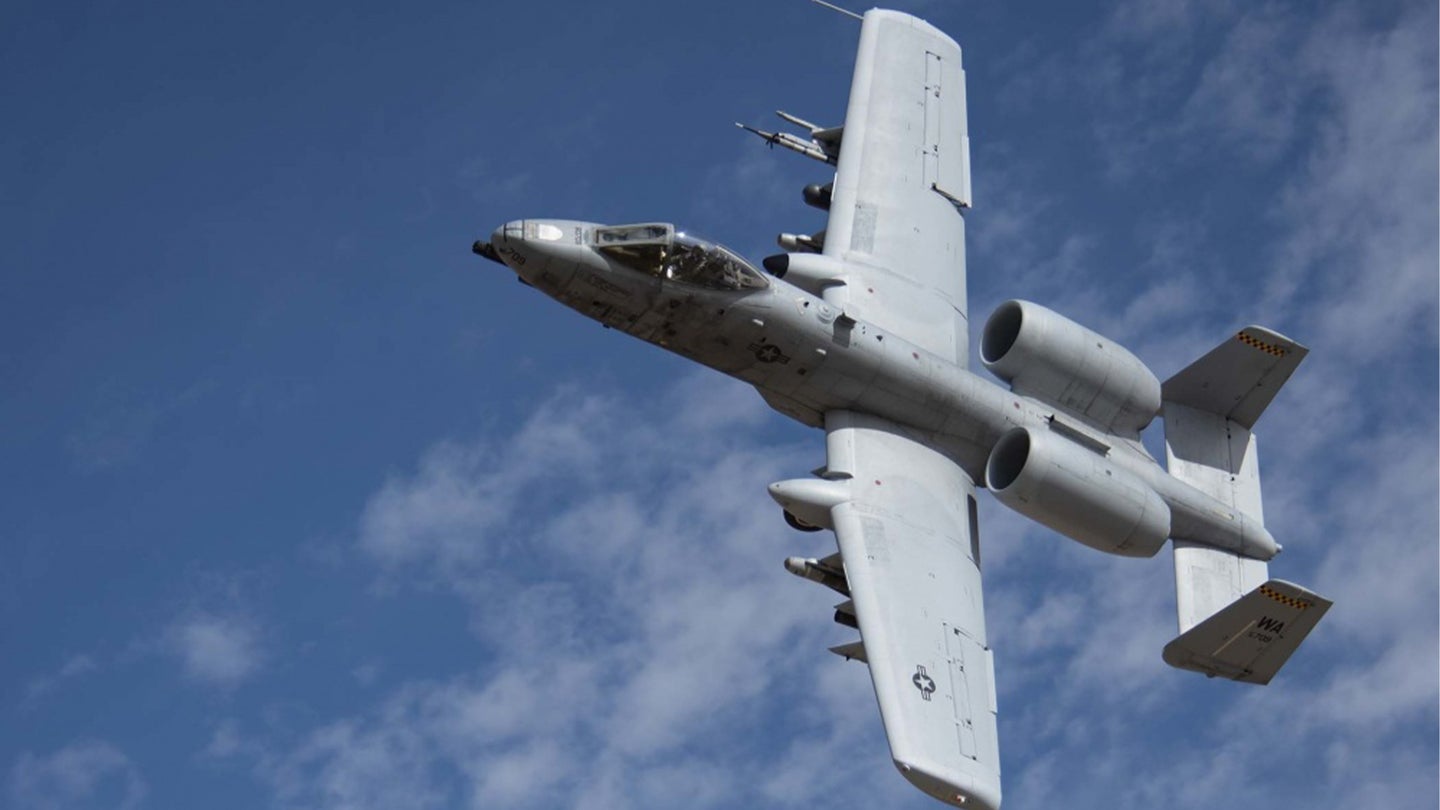 An A-10 Thunderbolt II flies over the Nevada Test and Training Range, Nev., May 15, 2019. The A-10s competed in Gunsmoke, a competition testing pilots and maintainers capabilities and skills in different areas of expertise alongside various aircraft assigned to Nellis. (U.S. Air Force photo by Airman 1st Class Bryan Guthrie).
SHARE

Anyone who’s been on the Task & Purpose website knows that we’re big fans of the A-10 Thunderbolt II, the tough-skinned, fire-spitting close air support fighter jet that has busted hundreds of tanks and saved the bacon of countless infantrymen since it first entered service in 1976.

So why then does the Air Force want to cut 42 A-10s from its fighter fleet, according to its proposal for the fiscal year 2022 budget? It mainly comes down to three things: maintenance costs, China, and new toys.

Affectionately known as the ‘Warthog’ or ‘Hog,’ the odd-looking A-10 is just as beautiful zooming into enemy fire now as it was 45 years ago, but the aircraft isn’t getting any younger, and as the machines age, the maintenance costs increase dramatically. The aircraft’s wings, fuselage and flight controls become more difficult to maintain as the years go by, according to a Government Accountability Office report from November. While the Air Force has bought new wings for many A-10s, there are fewer replacement parts to go around and it takes longer to inspect aircraft systems and keep them running, which takes up resources that the Air Force needs to keep other aircraft flying too. Cutting 42 A-10s would save $343.9 million, the Air Force estimated in its fiscal year 2022 budget proposal.

All of these added costs might be worth it because of the A-10s flawless performance under fire. But the Air Force has decided that the Hog may not be as useful in the future as it was in the past.

Like the rest of the military, the Air Force is obsessed with preparing for a future fight against China or Russia, which, unlike America’s other adversaries over the past 30 years, have advanced air defense systems and aircraft. The U.S. Air Force has decided that the slow-moving A-10, while great against Taliban insurgents wielding low-tech AK-47s and RPGs, would not survive against higher-tech anti-aircraft fire.

The A-10 is “very effective in current conflicts, but it is not viable in the long term,” according to Air Force fiscal 2022 talking points, as reported by Air Force Magazine. “Its lack of survivability in the evolving global threat environment and its singular capability set renders it ineffective in the needed role of affordable capacity” and against threats such as defensive counter air, suppression of enemy air defense, or homeland defense missions.

Old dogs can learn new tricks, and there are efforts to update A-10 technology and tactics to perform in a big war. For example, The War Zone wrote about units at Nellis Air Force Base, Nevada which were trying out using new weapons to take out threats at longer ranges and weapons systems that can engage multiple targets with one press of the ‘pickle button.’

Though it’s meant as a dedicated close air support platform, the A-10 can also hold its own in a dogfight, The War Zone reported.

“The air-to-air guys have a radar and they are a lot faster than we are, but they quickly learn that it doesn’t pay for them to get into the proverbial phone booth with us for a close-in dogfight,” retired Col. Denny “Gator” Yount, a former Hog pilot, told The War Zone in January.

Though it flies slow, the A-10 is agile and it can turn on a dime. Plus, that gun is nothing to mess with, Yount explained.

“Regardless of their turn rate, the best turn radius will get the first shot opportunity,” he said. “At the corner, our turn radius was about 1,700 feet, and when I’m almost dead out of energy it’s about 2,100 feet — that’s not very big at all. So, even if they can out rate me, my gun can cross their nose before they can come around. They have to respect that gun — which means they have to jink out of the way, which in turn presents some opportunities. If you put an A-10 in that close turning fight, we do very, very, well.”

All that is well and good, but it doesn’t seem to have convinced Big Blue Air Force, which in the long run wants to save money to buy newer aircraft.

The Air Force has seven different fighters to take care of: the F-15C/D, F-15E Strike Eagle, F-15EX Eagle II, A-10, F-16 Fighting Falcon, F-22 Raptor and F-35 Lightning II, which is more than it has ever had before. That means a ton of maintenance costs, a ton of supply chains that can falter, and less money for the Air Force’s many other priorities, like bombers, missiles and transport aircraft. Over the past few months, top Air Force brass have spoken of cutting the seven-fighter fleet to “four-plus-one” with the “plus-one” being the A-10, which the service hopes to gradually retire at some point in the 2030s, Air Force Magazine reported.

Thing is, one of the four aircraft doesn’t exist yet. The four include the F-35, F-15EX, F-16 and the classified Next Generation Air Dominance platform, which Air Force Magazine reported could be a family of systems, known to be at least one manned fighter and potentially several unmanned variants. The branch also hopes to develop a new Multi-Role fighter, called MR-X, in the 2030s, Air Force Magazine reported. Both NGAD and MR-X would be developed using new design techniques that would allow the Air Force to get it flying sooner, though with a short service life, which means lower sustainment costs, as it hopes successor aircraft would follow soon after, Air Force Magazine wrote.

The Air Force hopes that mix will help it keep pace with threats from China, its most technologically-advanced competitor. That means the A-10 may head for the boneyard, the dry desert in Arizona where the Air Force keeps its old planes in case they’re ever needed again, in the next 10 to 20 years. However, when that process begins is still an open question. After all, the Air Force has tried several times before to start moth-balling the A-10, only to meet stiff resistance from Congress. Just last year, for example, the Air Force sought to retire 44 Hogs as part of its fiscal year 2021 budget request. But Congress stipulated in its 2021 defense funding bill that no funds could be used to divest or retire any beloved A-10s in the fleet. It looks like at least one lawmaker is ready to go another round this year too.

“As someone who has flown close air support in combat, I know that the A-10 is unmatched in carrying out its mission and provides an invaluable capability to protect American service members on the ground,” wrote former astronaut and Navy A-6 Intruder pilot Sen. Mark Kelly (D-Ariz.) in a statement sent to Task & Purpose.

“Removing A-10s from the fleet when there is not another aircraft capable of performing this mission takes a vital tool away from our military and is the wrong step for our national security. I oppose this plan and will be working with Republicans and Democrats to keep the A-10 flying at Davis-Monthan [Air Force Base] in this year’s defense bill,” the Senator wrote.

So no matter what happens, the hundreds of remaining Hogs still have plenty of BRRRTing to do before their work is done.

Featured image: An A-10 Thunderbolt II flies over the Nevada Test and Training Range, Nev., May 15, 2019. The A-10s competed in Gunsmoke, a competition testing pilots and maintainers capabilities and skills in different areas of expertise alongside various aircraft assigned to Nellis. (U.S. Air Force photo by Airman 1st Class Bryan Guthrie)