The Air Force landed A-10s on a Michigan highway to practice operating in austere environments without the large bases airmen are used to. 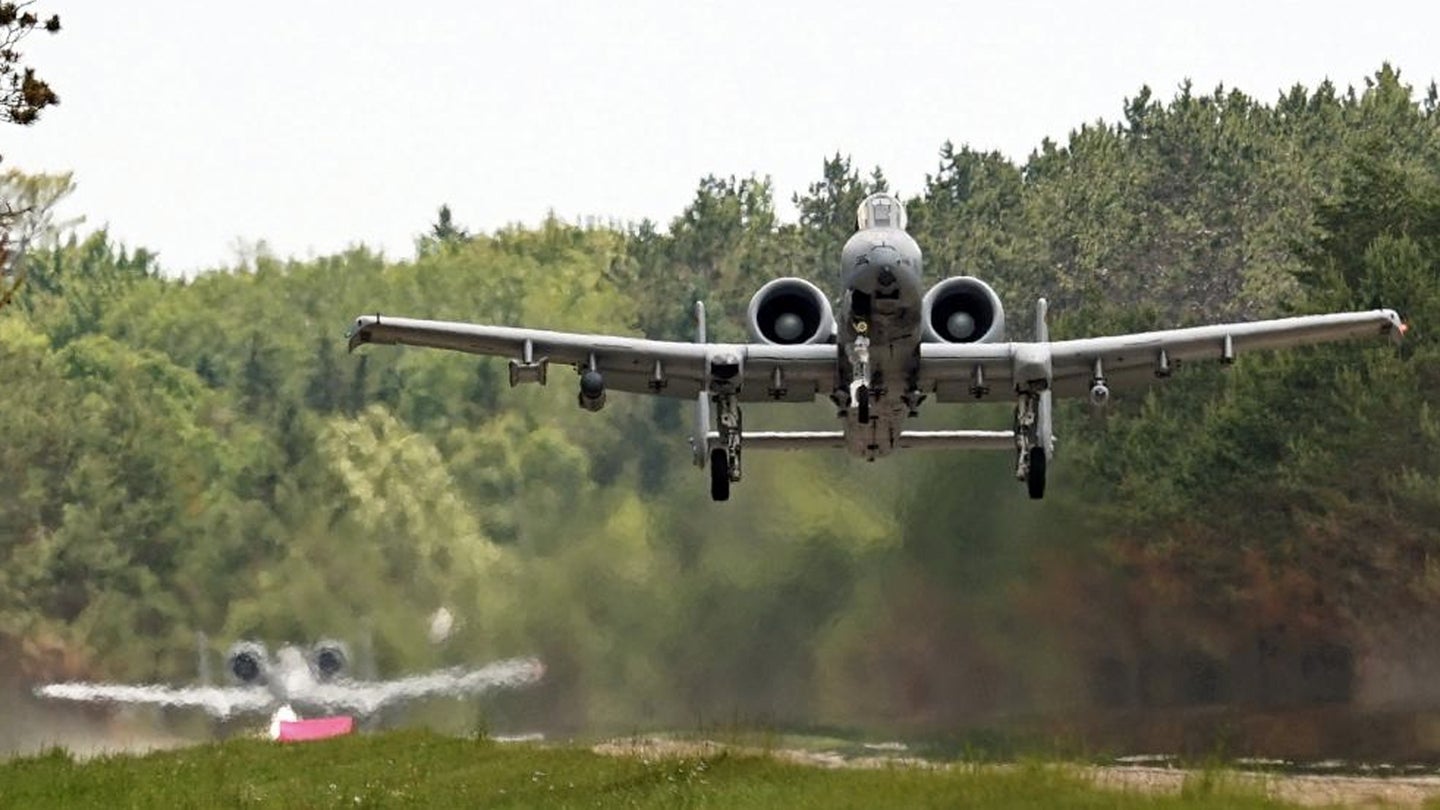 The old saying “whatever goes up must come down” can be a real pain in the butt when you’re an airpower strategist planning for a possible war against China over the vast Pacific Ocean, where places to land heavy, expensive jets are few and far between. That’s why airmen from around the country gathered in the woods of Michigan’s Upper Peninsula on Wednesday to practice something that does not happen very often: landing a military aircraft on an ordinary civilian highway, and then taking off again.

The exercise is meant to prepare airmen in case they have to operate in “austere environments,” like remote Pacific islands where the only ‘runway’ available is an ordinary road or just a dirt strip, which is a possibility senior Air Force leaders are already working on in advance.

“We’ve surveyed almost every piece of concrete in the Pacific for whether we can use it for a hub or a spoke” for projecting airpower, Gen. Kenneth Wilsbach, the head of Pacific Air Forces, told reporters last September.

Last year, the Air Force made history by landing four A-10 attack planes and two C-146 transport aircraft on a closed-off portion of Michigan State Highway M-32, which branch officials said was the first time any Air Force aircraft intentionally landed on a civilian roadway on U.S. soil.

This year, the Air Force took the exercise a step farther by practicing an Integrated Combat Turn, where airmen quickly rearm and refuel the jet while it’s still running so the aircraft can take off again and rejoin the fight. The move requires aircrew, maintenance, weapons and fuels airmen to work together to pull it off, all without the usual facilities provided by a large air base, or the wide expanses of air base tarmac. But pull it off they sure did. The integrated combat turn, which is part of the exercise Northern Agility 22-1, demonstrated “the ability of our airmen to generate combat power anytime, anywhere,” said Brig. Gen. Bryan Teff, assistant adjutant general and commander of the Michigan Air National Guard.

A-10s were not the only aircraft at the party on highway M-28. Several light aircraft from Air Force Special Operations Command also showed up, including C-145A transport planes and MC-12W and U-28A intelligence, surveillance and reconnaissance aircraft. A C-146A transport plane from the Air Force reserves was also there. The presence of so many special operations aircraft may suggest that the skills practiced in Northern Agility 22-1 could also be applicable to small operations of elite units in both a large conflict with China or Russia or in counterterrorism missions in austere areas.

However, landing on a civilian highway in Michigan would not have been possible without the cooperation of local civilian agencies like the Michigan State Police, Michigan Dept. of Transportation and the Alger County Sheriff’s Office. Lt. Col. Brian Wyrzykowski, the lead operations planner for Northern Agility 22-1, gave those agencies a shout out in the press release, which may suggest another crucial element of Air Force strategy: local partnerships. Whether it’s learning from local Alaskans how to build shelter and find food in an arctic wasteland or bonding with the islanders on the Pacific island of Tinian, where the Air Force briefly set up an air base last summer, the branch is striving to grow partnerships throughout the Indo-Pacific, which might be crucial to doing things like landing an A-10 on a civilian highway.

The landing zone on the closed, 9,000-foot stretch of highway was called “Hawk LZ” in tribute to Maj. Durwood “Hawk” Jones, an F-16 fighter pilot with the Wisconsin Air National Guard who died in a 2020 training accident in Michigan. It seems Hawk’s LZ was not just a highway. It was a highway to … the danger zone.