It may not be sharks with frickin' laser beams attached to their heads, but transporting half a pod of dolphins across the country in the belly of a cargo plane is quite the sight to behold 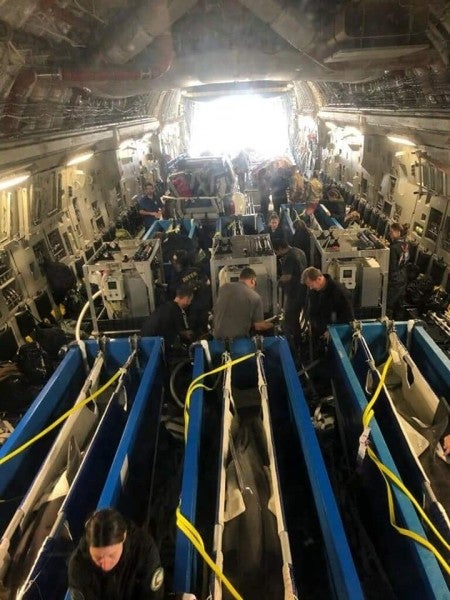 It may not be sharks with frickin' laser beams attached to their heads, but transporting half a pod of dolphins across the country in the belly of a cargo plane is quite a sight to behold.

The dolphins are part of the Navy's Marine Mammal Program headquartered at the SPAWAR Systems Center Pacific in San Diego, which has been training bottlenose dolphins to ward off enemy swimmers and sweep for mines on the ocean floor since the 1960s.

A spokeswoman for the 60th Air Mobility Wing confirmed the authenticity of the photos, noting that it was not taken or released by public affairs officials.

According to James Fallin, spokesman for Naval Information Warfare Systems Command, the dolphins were being transported from Naval Air Station North Island in San Diego, California, to Naval Air Station Key West, Florida to participate in training exercises “to maintain their mobile mine hunting capabilities.”

The Marine Mammal program had 85 dolphins and 50 sea lions in its ranks as of 2015, according to Business Insider.

“Mines and other potentially dangerous objects on the ocean floor that are difficult to detect with electronic sonar, especially in coastal shallows or cluttered harbors, are easily found by the dolphins,” according to the Navy. “Both dolphins and sea lions have excellent low light vision and underwater directional hearing that allow them to detect and track undersea targets, even in dark or murky waters.”

As Popular Mechanics notes, the Navy's most recent public dolphin deployment came in 2018, when eight Mark 7 dolphins scouted for simulated mines during a countermeasures exercise as part of the service's annual Rim of the Pacific (RIMPAC) exercises.

This isn't the first time that Air Force and Navy have worked together to fly bunch of dolphins across the country. According to Fallin, the mammals are transported via C-17 “several times a year.”

Indeed, airmen from the 301st Airlift Squadron in 2017 transported four dolphins and their handlers from Naval Air Station Key West in Florida, to San Diego.

“The sensitivity of the cargo posed a unique challenge for us,” 301st AS pilot Lt. Col. Alex Salogub said at the time. “We don’t normally need to worry about pressurization or temperature issues with most cargo. With the C-17’s flexibility and capability as a multi-role aircraft, we are (able to) successfully complete these unique challenges.”

301st AS loadmaster Staff Sgt. Suzannah Grant had a different take on the mission: “As loadmasters, we always swap stories about what was the coolest thing you moved. Most are helicopters or tanks, but how many people can say they moved dolphins?”