Buckle up, everyone: the Air Force is forging ahead with its push to develop a "flying car" straight out of your science-fiction dreams. 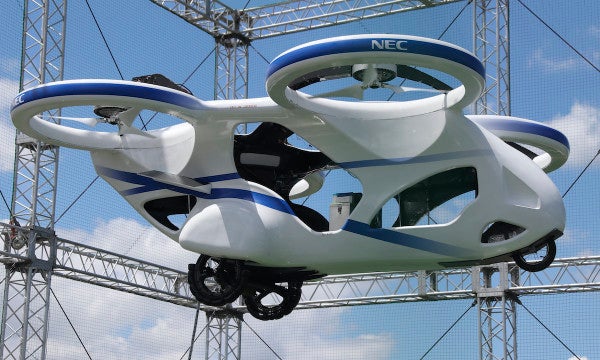 Buckle up, everyone: the Air Force is forging ahead with its push to develop a “flying car” straight out of your science-fiction dreams.

The Air Force plans on issuing a solicitation Tuesday for industry proposals for its new 'Agility Prime' electric vertical takeoff and landing (eVTOL) program, a concrete step towards actually developing a militarized flying car to shuttle troops to and from distant battlefields.

“Now is the perfect time to make [the] Jetson’s cars real,” Air Force assistant secretary for acquisition Will Roper told reporters on Friday, adding that the service is “looking at commercial markets, in this case the electric vertical and takeoff and landing, [the] flying car market” for ideas for the future vehicle.

According to Jane's 360, the request for proposals isn't geared towards developing a brand new prototype, but a challenge-style competition in which various private-sector companies will bring in their existing offerings to “perform missions” on U.S. military testing ranges.

“We’re working with our operators right now on what missions we might do,” Roper said, per Breaking Defense. “They’re a lot, which is great. There’s pilot rescue, there’s logistics, mobility is a great mission.”

As Breaking Defense notes, the competition isn't just an opportunity for the Air Force: It's a chance for commercial firms to  “[avoid] the need to go through the time-consuming safety certification” from the Federal Aviation Administration while flaunting the potential military applications of their tech.

As Defense One noted in September, the Air Force's push for a flying car grew out of a desire among U.S. special operations forces for a high-speed, semi-autonomous platform with “an ultra-low noise insertion signature” to ferry warfighters through battlespaces too contested for conventional vertical-lift aircraft like the V-22 Osprey.

“We went back to [Air Force Special Operations Command] and said, 'We can also look more broadly at where commercial innovation is going in flying cars and see what's possible,'” Roper said of the Agility Prime program at the time. “It may not be able to do the full mission of the Osprey but it has a lot of compelling options, especially in logistics.”

The Air Force's fiscal year 2020 budget request included $25 million for Agility Prime to cover a “high-speed vertical lift demonstration,” an investment that lawmakers affirmed at the time as “crucial to the Air Force's ability to develop a lethal, agile, and resilient force posture and employment.”

I've said it once, and I'll say it again: Full. Metal. Jetsons.