It's been nearly 20 years since the most recent F-15 rolled off the assembly line for the U.S. Air Force, and the service is officially looking to add a fresh variant of the aircraft to its inventory 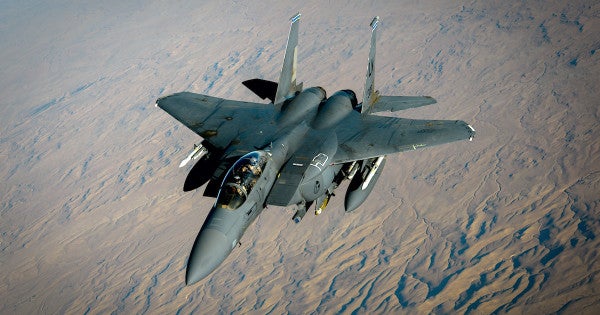 It's been nearly 20 years since the most recent F-15 fighter jet rolled off an assembly line for the U.S. Air Force, and the service is officially looking to add a fresh variant of the aircraft to its inventory.

News of the solicitations was first reported by Aviation Week's Steve Trimble, who noted that the single-source notices mark “the first concrete steps to signing new orders and reviving U.S. F-15 procurement after a nearly 20-year hiatus.”

The acquisition of the F-15EX is specifically intended as “a refresh to the F-15C/D fleet and augment the F-15E fleet,” according to one of the pre-solicitation notices. Here are some of the aircraft's technical details and intended capabilities, as first reported by The War Zone way back in July 2018:

The aircraft's inclusion in the fiscal year 2020 defense budget wasn't easy: In September 2018, then-Air Force Secretary Heather Wilson in September stated that the Air Force had no interest in picking up the fourth-generation F-15EX over additional fifth-generation F-35 Joint Strike Fighters.

After Wilson resigned in March 2019, the Air Force reversed course, proposing a buy of eight F-15EX aircraft rather than the Pentagon's original proposal of a dozen as a “short-term patch” to replace the service's aging fourth-generation F-15C fleet without cannibalizing spending for the F-35.

“We absolutely adamant that the F-35 program, the program of record, absolutely stays on track and we don't take a dime out of the F-35,” as Air Force Chief of Staff Gen. David Goldfein told the Senate Armed Services Committee the following April.