"It was a great year for the wing, the squadron and myself, but to me it’s more of a decade process." 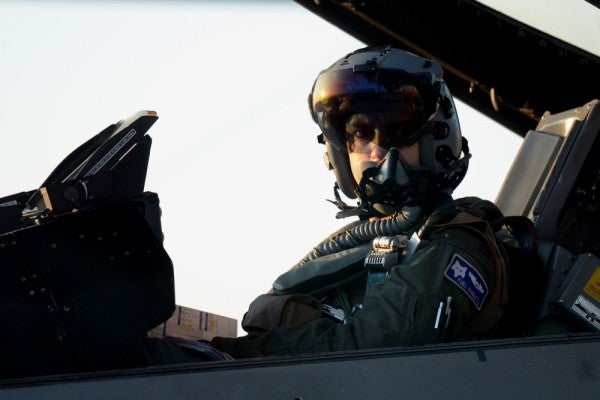 Most Air Force fighter squadrons take months to train for a deployment. But when Maj. Brady “Fuel” Augustin was ordered on a no-notice deployment in response to Iran's ballistic missile attack on U.S. forces in Iraq earlier this year, he had to spin all the way up ASAP.

It was a tall order, but Augustin, who is chief of weapons and tactics for the 31st Operations Support Squadron at Aviano Air Base in Italy, passed the test with flying colors.

“The no-notice deployment consisted of aircraft and personnel departing Aviano Air Base within 9 days, and our F-16 fighters completing the first combat sortie within 14 days,” Julie Scott, a spokesperson for Aviano Air Base, told Task & Purpose. “Augustin's leadership of personnel to plan and execute the full spectrum of training at home was implemented and successfully executed during combat missions.”

It was this rapid deployment, a massive air and missile defense exercise in Europe this spring, and ten years of hard work in the Air Force that helped Augustin earn the Lt. Gen. Claire Lee Chennault Award, which is widely understood to recognize the top fighter pilot in the service.

“I feel that it’s an award that puts credit on the last year,” said Augustin in an Aug. 18 press release. “It was a great year for the wing, the squadron and myself, but to me it’s more of a decade process. When I look at it, that’s what I’ll see.”

Like many fighter pilots, Augustin is driven by a competitive edge. The airman grew up playing football and wrestling in Minnesota and he sees aerial combat as another arena in which to test his mettle.

“I'm driven by competition,” said Augustin, who also flies F-16s for the distinguished 555th Fighter Squadron. “In the world of aerial training and combat, generally there is a winner and a loser. Coming into a flight or a mission and putting all your learning and preparation on the table to see if you can beat your adversary is a great motivator.”

That be-the-best attitude is anchored by a tradition of service in Augustin's family. The major said he always looked up to his father and grandfather who served in the Army and Navy, respectively.

And while Augustin opted for the Air Force Academy, he soon realized the path he chose was not an easy one.

“It was a challenging 4 years,” he said of his time at the academy. “I reevaluated my decision more than a few times, thinking it may not be for me.”

“Thankfully I had great, supportive people around me, and kept in mind one of my favorite quotes from Jimmy Dugan: ‘It’s supposed to be hard. If it wasn’t hard, everyone would do it. The hard is what makes it great.’”

The Academy was the first of many challenges Augustin has faced in the Air Force, culminating with planning missions for the annual multinational Astral Knight exercise, U.S. European Command’s largest integrated air and missile defense exercise, which the major helped develop and lead.

Working with foreign aviators is one thing Augustin has in common with the award’s namesake, who trained Chinese fighter pilots to fight the Japanese in World War II.

As leader of the Flying Tigers, Lt. Gen. Chennault commanded a group of American volunteers who painted shark mouths on their P-40 Warhawk fighters, which they used to attack Japanese aircraft and protect supplies running to friendly forces along the notoriously difficult Burma Road.

As an Aviano airman Augustin’s surroundings are a bit more pleasant.

“It has some of the greatest views, phenomenal weather and a fantastic mission set where we’re close to almost every fight going on, on planet Earth,” he said in the press release. “We get a mixture of real world missions, we live in a beautiful place, and we can go on vacation to umpteen countries in our time here. It should be everybody’s favorite assignment.”