The change goes into effect on Sept. 1 and applies to both officers and enlisted Marines. 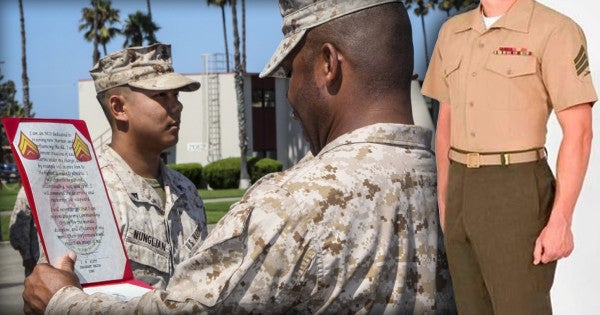 The Marine Corps is saying goodbye to official photographs as a requirement for promotion — part of a Defense Department-wide effort announced last month by Defense Secretary Mark Esper.

Marine manpower chief Lt. Gen. David Ottignon said in an administrative message released on Wednesday that photographs would no longer be “authorized information” to be considered by promotion boards or officials in charge of selecting Marines for training, education, or unit assignments.

The change goes into effect on Sept. 1 and applies to both officers and enlisted Marines.

Secretary Esper ordered a ban on promotion photos across the military in July while ordering a service-wide review of hairstyle and grooming standards due back by Sept. 15.

As Esper wrote in a July 14 memo, the move was “to ensure promotion boards and selection processes enable equal opportunity for all service members, promote diversity in our ranks, and are free from bias on race, ethnicity, gender, or national origin.”

The Army dropped the photo requirement for officer selection boards in August after a 2018 study found that board members reviewing promotion packets without photos ranked candidates more similarly across the board, and the outcomes of women and minorities improved, according to Army Times.