“It was a very stressful day, I could have used some Gold Bond powder.” 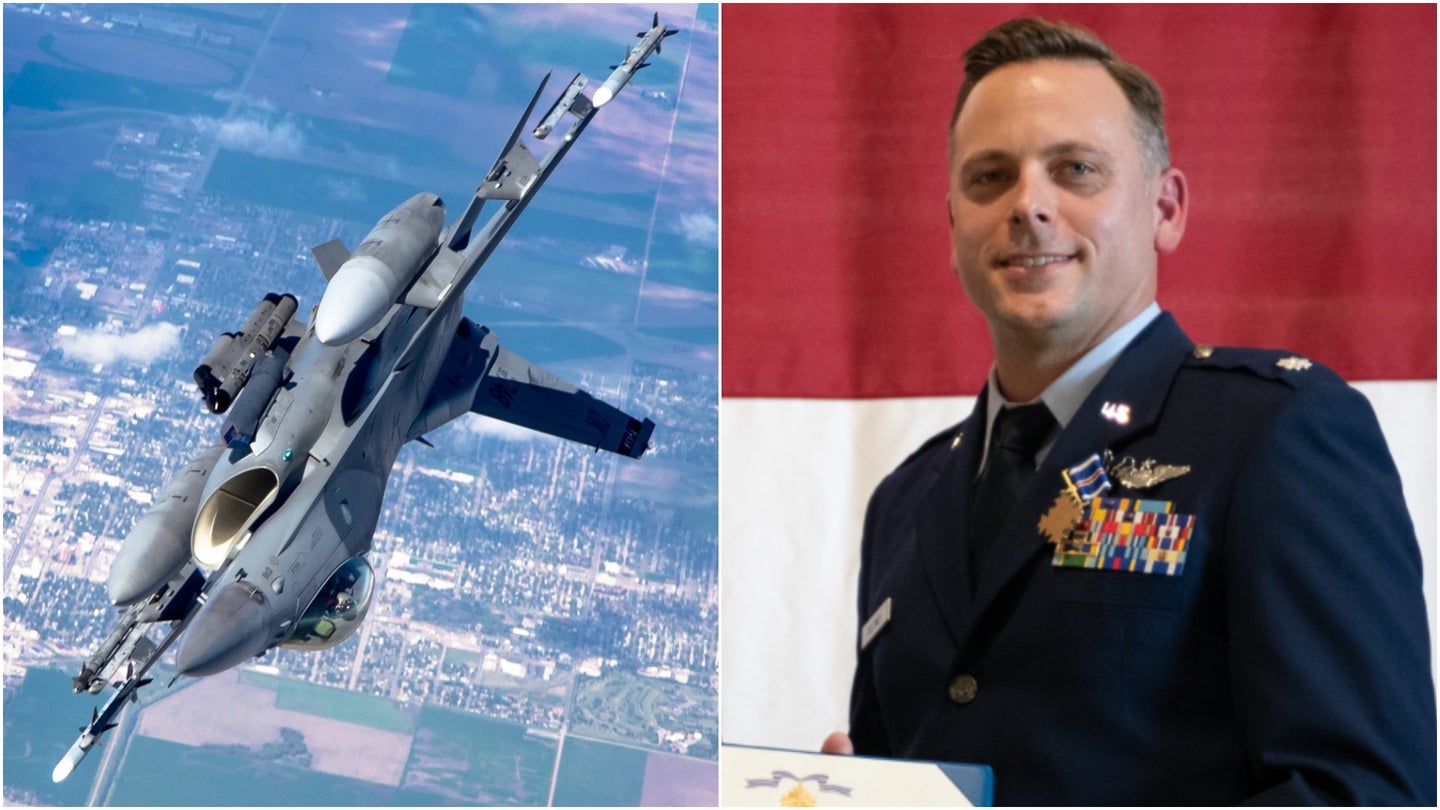 An Air Force F-16 fighter pilot with the Oklahoma Air National Guard received one of the military’s most prestigious awards for heroism in recognition of his work to save U.S. and Afghan special operations forces during a fierce gunfight in Afghanistan in 2018.

“If Maj. [Michael] Coloney had not executed his F-16 strikes flawlessly and decisively, more friendly lives would have certainly been lost,” said Col. Ryan Jones, quoting the words of the ground commander whose troops’ lives were on the line that day.

Now a lieutenant colonel, Coloney received the Distinguished Flying Cross, the nation’s fourth-highest award for combat valor, at a ceremony on Sunday at Tulsa Air National Guard Base. At the ceremony, Jones explained in detail what Coloney did to receive the award, which recognizes a pilot’s “extraordinary aerial achievement.”

“2018 was a fierce time of fighting for both coalition and enemy forces,” Jones said. “The amount of ordnance expended on this one particular deployment alone eclipsed all combined weapons employment events over the preceding 11 combat deployments” for the 125th Expeditionary Fighter Squadron.

The award stemmed from an engagement on April 29 that year, when a detachment of 53 Army Special Forces and Afghan soldiers “cleared compounds of interest” in the village in Kapisa province in order to disrupt Taliban networks there, Jones explained. The detachment stayed overnight, but the next morning, April 30, they were attacked by 80 Taliban and Haqqani Network fighters. Coalition troops were pinned down in three compounds in the village by small arms, machine gun and rocket-propelled grenade fire coming from positions to the east and south of them. The enemy knew what they were doing, because while one group battled the coalition troops from afar, a second moved in from the west close enough to throw hand grenades over the compound walls.

“Friendly forces were completely surrounded and started taking fire from all sides,” Jones said. “The compound developed into an intense troops in contact situation.”

Meanwhile, then-Maj.Michael Coloney was flying an orientation sortie for his wingman’s first combat mission. They had been flying for only 30 minutes when they got a radio call from then-Senior Airman Justin Prack, the Air Force Combat Controller (a highly-trained airman who coordinates air support for special operations teams) embedded with the Army team in combat. Coloney’s flight was the closest fixed-wing air support, so they jetted over and found a mess below them. Communications were initially spotty, and in the close-quarters fighting, it was difficult to make out who was who — a dangerous situation for pilots trying to avoid hitting friendly positions.

Maj. Coloney initially flew a few “show of force passes,” in order to get a better look and try to intimidate enemy fighters, Jones said, meaning Coloney flew fast and low over the village so that the roar of his engine would force the enemy’s heads down for a second.

With each pass, Coloney and his wingman developed a better sense of what was going on, until finally they did a few high-angle strafes with their 20mm Vulcan cannons. For F-16s, high-angle strafes involve a 25-degree or greater dive, which allows for a better grouping of shots than a low-angle strafe. That accuracy is important for a close-in knife fight like the one Coloney was flying over.

It worked, and enemy fighters pulled back to the nearby ridge lines. The Air Force pilots then dropped 500-pound GBU-38 bombs on their heads, destroying an enemy position and blowing the windows out of a nearby friendly compound.

The bombardment bought some time for troops on the ground, but the crisis was far from over. Friendly forces had eight injured soldiers to medically evacuate, but heavy enemy fire prevented helicopters from flying in to pick them up. It was decided that the ground troops would hunker down in a single compound, but to do that they would have to charge down 100 meters of open road, Jones explained.

By now, close air support helicopters, observation aircraft and aerial refueling tankers had also arrived on station, and it was Coloney’s job to fill them in on what was happening. With one eye on the ground and another in the air, the pilot coordinated the busy airspace while working with Prack and his wingman to set up attack runs.

“Each attack brought great stress and discomfort in keeping track of the dynamic nature of the situation,” Jones said. But somehow the friendly ground troops managed to get to the central compound, get medevaced and, after 12 hours of fighting, get the hell out of dodge. One soldier, Spc. Gabriel Conde, was killed in the battle, and 11 more were injured, though who knows how many more would have been if Coloney and his wingman had not been there.

“It was his exemplary skill, outstanding airmanship and devotion to duty under extremely hazardous conditions that allowed Coloney to save the lives of so many U.S. and Afghan Special Forces troops that day,” the Air Force wrote in a press release.

From arriving on station to finally heading home, Coloney and his wingman fought for five hours, which is a long time when you consider how focused the pilots must have been to coordinate the airspace, talk to troops on the ground and make their own attacks while keeping a high-performance aircraft aloft.

“The level of difficulty is hard to explain unless you’ve been there,” said retired Lt. Gen Harry Wyatt III, the former director of the Air National Guard, who spoke at the ceremony. “The intensity of the fight that he was involved in is hard to understand … I couldn’t help but feel my heartbeat speed up a little bit … start sweating down the middle of my back because that’s probably what he was doing that day too.”

Brig. Gen. Derek O’Malley, who commanded the Bagram-based 455th Air Expeditionary Wing during the last few months of the U.S. war in Afghanistan, also spoke to the difficulty of achieving what Coloney, whose callsign is “Fist,” did that day in 2018. In a pre-recorded video played at the ceremony, O’Malley explained that each F-16 close air support mission is different, but there are still common elements that “are very much the same.”

“The squelch break of satcom [satellite communications], the intensity of the voices of the men and women on the ground, the rush of the F-16 [environmental control system] as it surges sometimes in these older aircraft; the piddle packs and Gatorade bottles and snacks piled on the right of the console or stashed in a helmet bag behind the ejection seat, and truly feeling the weight of knowing that many lives are depending on you,” O’Malley said.

Any pilot can drop bombs or shoot a 20mm cannon, the general said. But “understanding the ground force commander’s intent, while keeping track of friendly positions in a dynamic firefight and striking with surgical precision so that you don’t hurt any of the friendlies on the ground” over the course of five hours “is really hard,” he said.

O’Malley used Coloney’s story to remind listeners of the importance of the mission of close air support. The ceremony comes as the branch tries to forget about low-intensity conflicts like Afghanistan and retire the A-10 Warthog attack plane, a legendary CAS platform, so it can prepare for a fight with China or Russia.

“Do not let the importance of this CAS mission fade,” O’Malley said. “We need to tell these stories, we need to maintain the unique skillsets that it takes to truly support and integrate with ground forces on the ground, because the day may come where someone calls upon us … to enter that fight again.”

For his part, Coloney credited his success to his family, his mentors and the other airmen who made his mission possible.

“It takes hours of maintenance to have these jets ready for combat power at a moment’s notice, let alone to cover the air over Afghanistan 24 hours a day for 90 days straight,” he said. “We flew a year’s worth of flying in those 90 days with half the jets we normally have.”

Above all, Coloney credited Justin Prack, now a staff sergeant, who stayed calm throughout the fight that day and who made it to the ceremony on Sunday. The pilot explained that, unlike most friendships, where trust is built over time, he and the CCT had to trust each other the instant they met over the radio, even though they knew each other only as Jag-1, for Prack, and Viper 1-1, for Coloney.

“We were required to have this immediate and unwavering trust in order not to make a bad situation worse by slinging 500 pound bombs and hundreds of rounds of 20mm at the ground within meters of friendly locations,” the pilot said.

“Thank the Lord for keeping us safe,” he added. “It was a very stressful day, I could have used some Gold Bond powder.”