“We all know that the Air Force is like a family away from family, but for me, it literally is my family.” 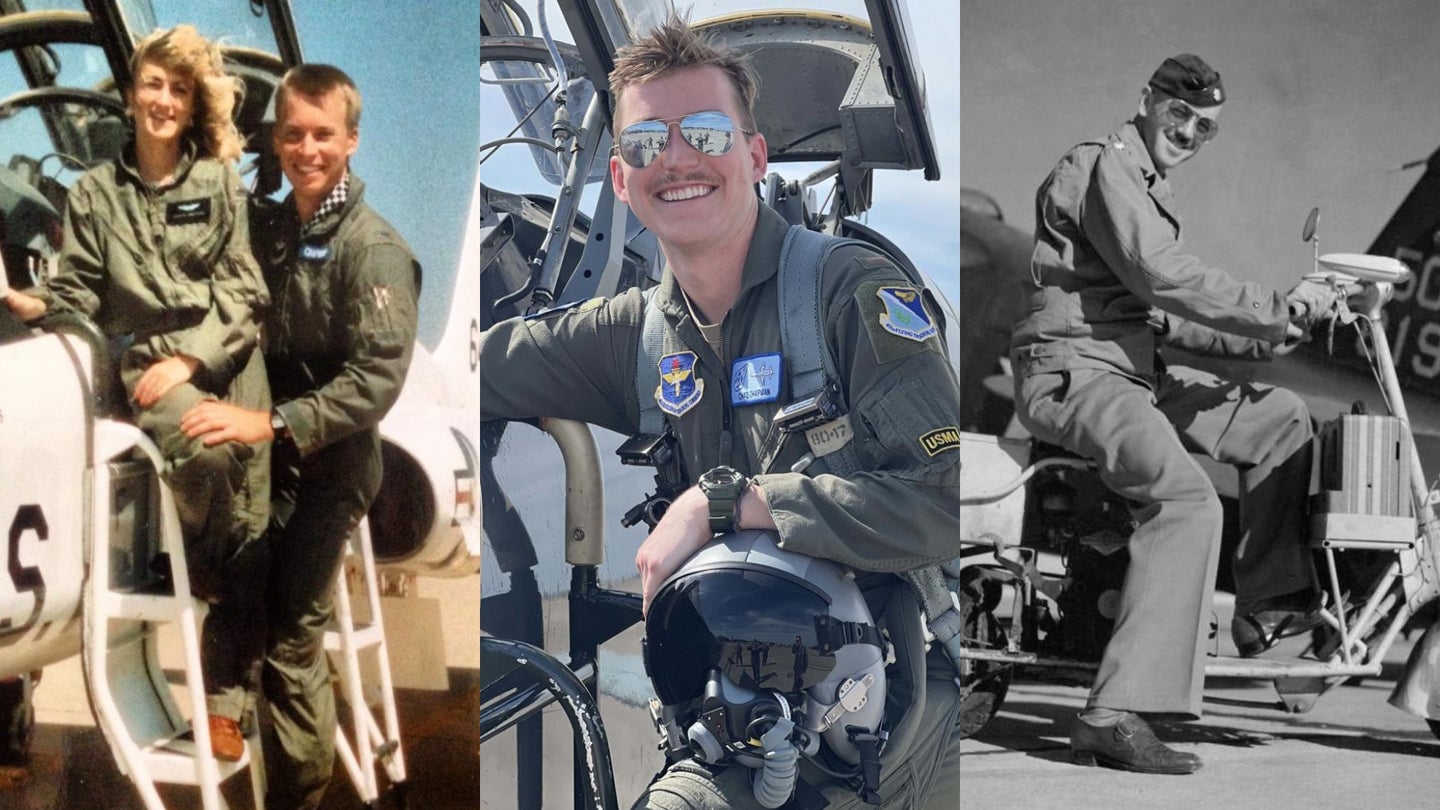 The U.S. Air Force has flown a lot of fighter jets over the years — so many that they are often grouped in “generations,” from the first generation of F-80 Shooting Stars used in the last days of World War II to the newest fifth-generation stealth fighters like the F-35 and F-22.

“We all enjoy flying so much,” said 1st Lt. Chad Chapman, a T-38 Talon student pilot with the 47th Flying Training Wing at Laughlin Air Force Base near the border city of Del Rio, Texas. Chad is the latest in a long line of flying Chapmans stretching back to his great-grandfather, William “Bill” Chapman, who flew the propeller-driven P-36 Hawk back in World War II.

“He wanted to serve his country and he loved to fly,” Chad Chapman said in an Air Force press release. “Flying was new back then, so it was a high honor and a dream for a lot of people.”

Richard’s sons James (Chad’s uncle) and John (Chad’s father) flew the F-111 and the F-15, respectively. For those keeping track, the F-111 was a third-generation strike aircraft generally used for ground attack missions from the 1960s to the 1990s. Meanwhile, the F-15 is a fourth-generation fighter that first flew in the 1970s and to this day has an undefeated record in dogfights.

But the Air Force was not out of new planes, and the Chapmans were not out of new pilots. Chad’s father John had three sons: Chase, Tyler and Chad. Chase flies F-15E Strike Eagles (and has a really cool helmet) while Tyler flies F-16s, another fourth-generation fighter still flying today that can perform a wide range of missions including air-to-air, air-to-ground and suppressing enemy air defenses. As a student pilot, Chad currently flies T-38 Talons, a jet trainer used to prepare pilots for flying fighter and bomber aircraft. However, the press release said that Chad is assigned to fly F-35 Lightning IIs, which is fitting because he is the youngest Chapman pilot and the fifth-generation F-35 is the youngest fighter in the Air Force fleet.

“In our eyes, flying beats any other job,” Chad said. “We’ve always been taught to aim high and shoot for our dreams. I think my great-grandfather had that mindset that kind of trickled down and instilled into all of us.”

The Chapmans are not the only family with Air Force-blue blood running through their veins. In 2018, the Air Force highlighted 1st Lt. Kenneth Ellison, a medical readiness officer whose parents reached the rank of master sergeant and whose grandfather was one of the first Black airmen when the service was formed in 1947. There’s also the DeWitt family, who have served at Wright-Patterson Air Force Base, Ohio ever since the late Master Sgt. Raymond DeWitt Sr., who served as a gunner on a B-17 bomber during World War II, retired there as a nuclear weapons superintendent for the B-52 in 1969. Now his son and three of his grandchildren have worked there too.

“Even though I plan on retiring soon, it means a lot to me to know that the history we have with the 445th [Airlift Wing] and the base will continue to be written,” said Master Sgt. Raymond DeWitt Jr., the elder DeWitt’s son, in a 2021 press release.

Still, even members of multi-generational Air Force families don’t automatically feel the call to serve. Despite his heritage, Chad didn’t always want to become a pilot. He went into the Reserve Officer Training Corps and studied computer science in college.

“My situation was a little special because my family always chose flying, so I wanted to make sure that what I did was what I was passionate about in life,” said Chapman. “I studied computer science in college and graduated with that, but it wasn’t really my passion.”

He eventually found his passion when he went on an incentive flight in an F-16 fighter. The flight definitely incentivized Chad.

“It just turned my world upside down,” he said. “I knew I had to fly and I wanted to be a part of that heritage and legacy.”

After college, Chad commissioned into the Air Force and is now going through specialized undergraduate pilot training. His journey to become a full-fledged F-35 pilot is far from over, but he has plenty of role models around him to follow.

“We all fly different aircraft, but we’ve all been through stressful moments,” Chad said. “We just remind each other that, ‘yes, it might be hard now, but it’s so worth it in the end if you just apply and push yourself.'”

The Air Force is not just a job for Chad and his fellow Chapmans: it’s practically a family business.