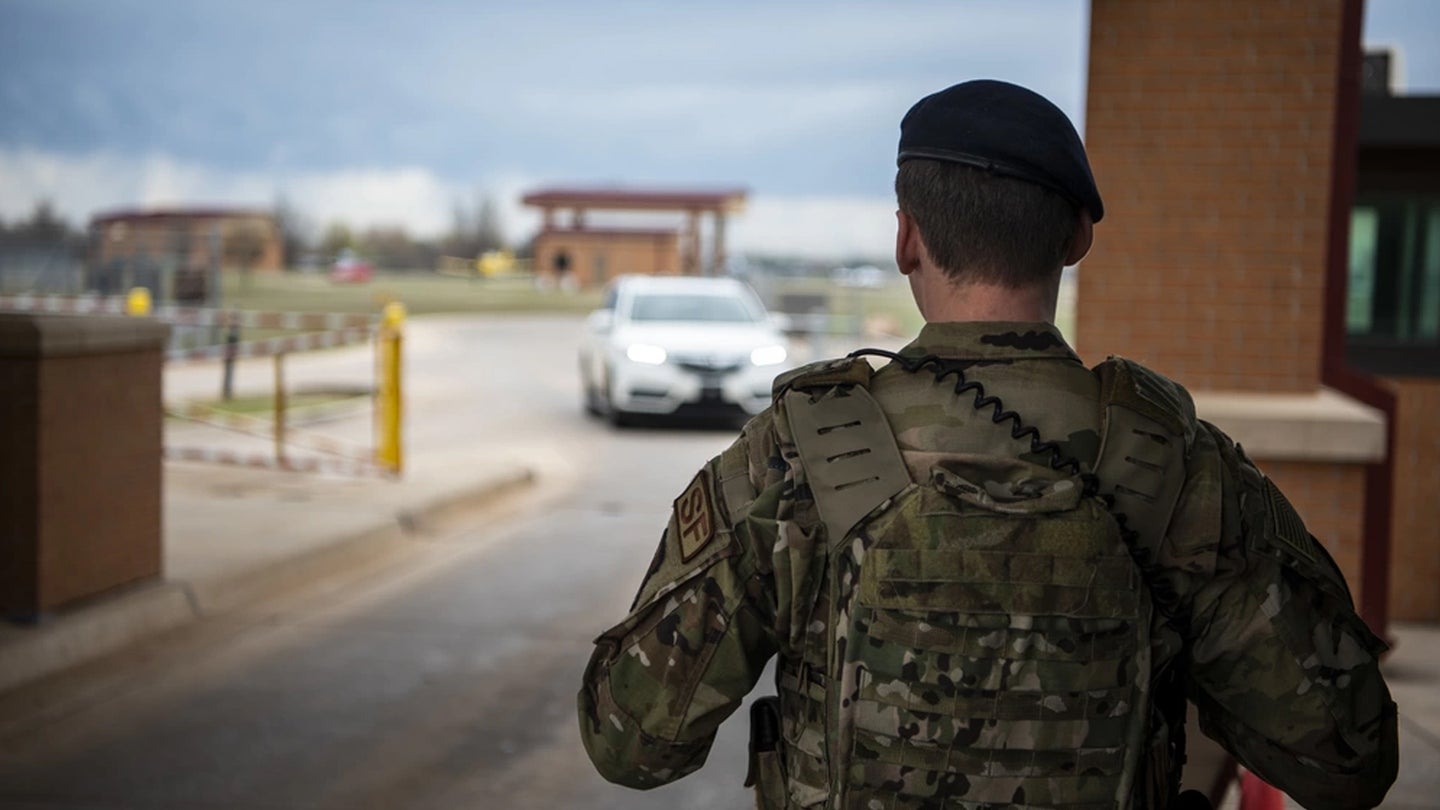 Imagine you are standing guard at the gate of your local military base. It’s been another long shift full of checking identification and asking for Common Access Cards, and you’ve had to stand around for hours in the stifling humidity of southern Georgia or the freezing cold of Alaska. All of a sudden, you see a car hurtling down the road towards you and your buddies. They’re not stopping, and you’ve got to act fast. What do you do?

That’s a question two Air Force security forces members had to answer last month at Beale Air Force Base, California. Airman 1st Class Nadine Blackwood and Airman Samuel Workman, both with the 9th Security Forces Squadron, were expecting a normal day when they started their shift at Beale’s Vassar Lake Gate, on the southern side of the 23,000 acre base. But it was not to be: a man driving a stolen vehicle was heading straight for them, with California Highway patrolmen hot on his heels.

“There was a car coming, being chased by two CHP officers,” Workman said in a press release on Monday. “My wingman and I noticed it coming at a high speed, so I hit the emergency barrier.”

Neither the California Highway Patrol nor local sheriff’s departments responded immediately with more specific information about the incident, but the Air Force defenders at the gate had all the information they needed: they had to stop that car.

Luckily, Workman had enough time to raise the outbound barrier manually, and that finally did the trick. The oncoming car drove straight into the barrier, the press release said. The driver was eventually taken away from the scene “by local medical responders,” the Air Force wrote in a press release, though it did not specify what condition the driver was in.

The press release attributed the stop to Blackwood and Workman’s “countless hours of training and preparation” for events like the incoming driver.

“I was just thinking, ‘is this real,’” said Workman. “Things like this don’t just happen.”

One security forces airman told Task & Purpose that most defenders have to raise the barriers to stop a vehicle at some point in their careers, but their reaction to it might change with experience.

“For new airmen it’s an excitement because it’s probably their first taste of action,” said the airman, who requested anonymity because he was not cleared to speak with the media. “If done correctly, they’ll get some type of recognition. Whereas for senior airmen or sergeants, it becomes more of a ‘we ain’t going home on time’ moment.”

The type of administrative paperwork that has to get done after a barrier incident varies based on the situation, but there’s generally “a lot,” of it, the airman said. Even worse, if you are posted at the gate, chances are you can’t get started on the paperwork until your shift is over.

As well-trained as any security forces defender is, it can be a stressful experience when it’s your call to push the button and raise a barrier which might cause extensive damage to the car and the person driving it.

“When you see a car hit the barriers it’s an intense moment because you think you might get in trouble,” the anonymous airman said. “But the overall feeling would still be ‘crap that’s even more paperwork.’”

But hey, paperwork is arguably better than the alternative, which is an intruder inside your base.

“I thought of the kids,” said Blackwood in the press release. “It was a Saturday, kids aren’t at school, they could be running around outside and I kept thinking how they could be affected. I was thinking of our community.”

For their efforts, both Blackwood and Workman were given special patches by Col. Heather Fox, the commander of the 9th Reconnaissance Wing, the host unit at Beale. Of course, the airmen won’t be able to wear those patches in uniform except on Fridays or at special events, as a commenter on the popular Facebook page Air Force amn/nco/snco was quick to point out. But Blackwood wasn’t in it for the patches. For her, it was just part of her day on post.

“I just feel like I did my job, I did what I was supposed to do and in a timely manner,” said Blackwood. “That’s what I’m here for. That’s why I was posted at the gate, and that’s what I did.”