“Our investigation has been completed and is with the command and their legal team for further action if warranted." 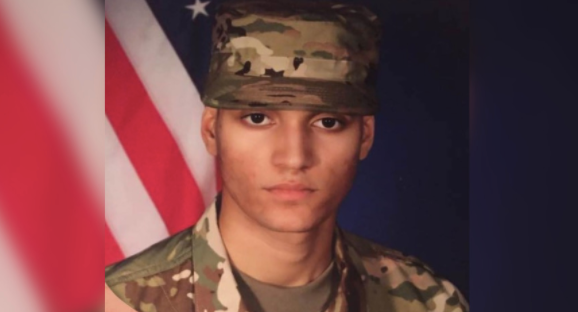 The soldier found dead on Tuesday near Fort Hood had been told the Army found his sexual assault report unsubstantiated prior to his disappearance, an Army investigator told reporters during a Wednesday press conference.

“Our investigation has been completed and is with the command and their legal team for further action if warranted,” said Special Agent Damon Phelps of the Army's criminal investigative command, or CID. “I can also share that the subject of the investigation took and passed a polygraph examination, and we found no witnesses that could corroborate Sgt. [Elder] Fernandes’ allegations.”

“There was a thorough legal review, and the allegations were unsubstantiated.”

It remains unclear when exactly the investigation ended, though Phelps said it was “fairly recently.”

According to Fernandes' family attorney, Natalie Khawam, Fernandes was allegedly groped by another male soldier in April.

“He was very upset, he was embarrassed, he was hurt, he was really angry,” his family’s attorney, Natalie Khawam, said of the alleged assault. “He reported it.”

Fernandes, 23, joined the Army in 2016. He was working as a chemical, biological, radiological, and nuclear specialist with the 553rd Combat Sustainment Support Battalion, 1st Sustainment Brigade, 1st Cavalry Division.

Lt. Col. Justin Redfern, commander of the 553rd CSSB, described Fernandes as a “leader in the formation,” who the chain of command “felt was exemplary.”

Redfern also said on Wednesday that in mid-March, the chain of command “noticed a change in behavior.”

“He re-enlisted to stay in the Army, and that was right around the same time his behavior began to change,” Redfern said. “In April, he moved off the installation, as he absolutely has a right to do, and his behavior continued to spiral downwardly, unfortunately.”

Redfern said that the change in behavior “preceded the unwanted touching.”

Redfern explained that on Aug. 10, Fernandes was identified as “failure to report,” and did not come into work. He said that after reaching out to Fernandes’ family, they were able to get in contact with him, and they were “able to gain contact with Elder again.”

Fernandes’ family told local NBC-affiliate KCEN-TV that he was admitted to the Carl R. Darnell Memorial Hospital on Aug. 11, and that he told them “very little” about why he was there. Fort Hood officials told the family that Fernandes was suicidal, per KCEN-TV. He was released on Aug. 17.

Redfern confirmed that Fernandes received medical care from Aug. 11-17, and then “cleared all protocols as necessary” and requested to be “dropped off at his house.”

That was the last day that Fernandes was seen or heard from.

His aunt, Isabel Fernandes, told Task & Purpose on Tuesday that it didn’t make sense that her nephew wouldn’t contact them — or at the very least his mother, her sister, who she said he is very close with. She said there was “no way Elder would let his mom go through this agony that she is going through right now.”

“To know that he has the option to contact his mom and he's not doing it, that is not the Elder that we know,” she explained. “The last conversation he had with his mom was, ‘I promise when I get out of here tomorrow, I’ll give you a call.’”

Shortly after the press conference concluded, a Fort Hood press release confirmed that the body found on Tuesday was that of Fernandes.

“The Wagonmaster Family is heartbroken with the news of Sgt. Fernandes’ passing,” said Col. Patrick Disney, commander of the 1st Cavalry Division Sustainment Brigade said in the press release. “Since his absence was reported, we have made a significant, concerted effort to search for him throughout Central Texas …. We send our deepest and most heartfelt condolences to his family and friends.”