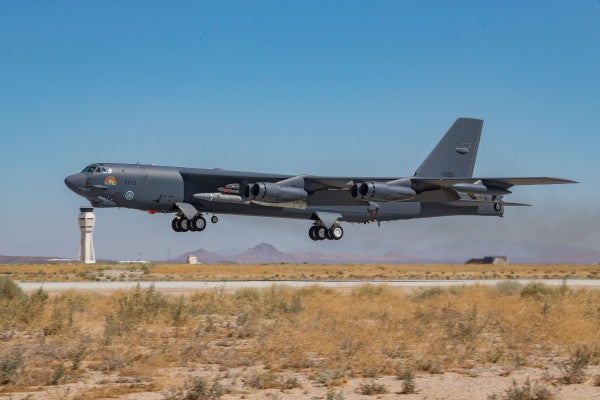 The Air Force just took a major step towards fielding a hypersonic weapon with the final captive-carry test of its AGM-183A Air-launched Rapid Response Weapon (ARRW) from a B-52 Stratofortress on Saturday.

The final test saw the ARRW affixed under the the wing of a B-52 off the coast of California, according to a release from the 412th Test Wing, relaying fresh telemetry and GPS data to ground stations and verifying systems integration with the bomber's launch platform.

Captive-carry flights are normally employed to test a new weapons system before it's ready for free flight under its own power.

In photos released by the Air Force, the ARRW — emblazoned with the words “celeri responsio, or “rapid response” — can be seen tucked under the wing of the B-52H, appropriately named “Dragon’s Inferno,” during flight preparations at Edwards Air Force Base on August 8.

“This is a major milestone for the program, the team and our Air Force,” Air Force Program Executive Officer for Weapons Brig. Gen. Heath Collins said of the captive-carry test in a statement. “ARRW is the first step in bringing game-changing hypersonic capabilities to our Warfighters.”

According to the Air Force, the ARRW is designed to both “provide combatant commanders the capability to destroy high-value, time-sensitive targets” and “expand precision-strike weapon systems’ capabilities by enabling rapid response strikes against heavily defended land targets.”

The Air Force successfully conducted its maiden flight with the ARRW just over a year ago in June 2019, and the service plans on plowing ahead with the system's first Booster Flight Test test later this year, according to the 412th Test Wing.

“The event this week demonstrated the ability to communicate with the prototype weapon,” 419th Flight Test Squadron Commander and Global Power Bomber Combined Test Force Director Lt. Col. Michael Jungquist said in a statement. “The entire team is excited to take the next step and begin energetic flight test of our first air-launched hypersonic weapons.”

As much as the final captive-carry test of the ARRW is a “major milestone” for the Pentagon's hypersonic aspirations, it's as much a step forward for the Air Force's plans to turn the legendary B-52 into even more of an “arsenal plane” for the service.

In November, Dr. Will Roper, Assistant Secretary of the Air Force for Acquisition, Technology and Logistics, said Tuesday, detailed plans to hypothetically load up a B-52 with multiple hypersonic weapons and transform the staid bomber into a “missileer.”

“Can we think more broadly about how an airplane carrying a lot of weapons can be looked at?” Roper asked at the time. “[For example], how does this standoff bomber work in the contested environment in a way that's complementary with the B-21 [Raider]?”

According to Jungquist, the answer is simple: “These weapons will enable application of conventional firepower anywhere in the world at eye-watering speed.”