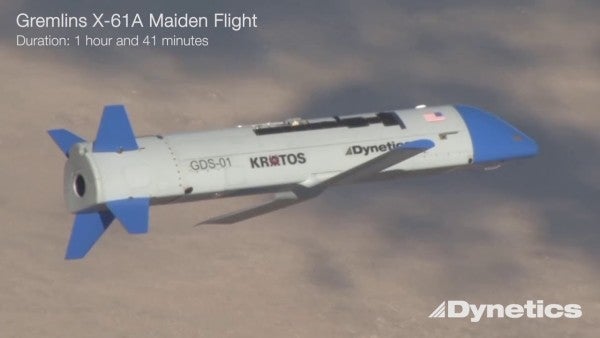 The Defense Department just took a major step towards making the dream of a flying drone carrier a reality.

The flight test, conducted at the Dugway Proving Ground in Utah, saw the airborne launch and free flight of a Gremlin drone from a C-130 Hercules wing pylon and demonstration of a number of capabilities over a one hour and 41 minute flight, according to Dynetics.

The test was initially delayed by damage wrought by a series of earthquakes that rocked Naval Air Weapons Station China Lake in California on July 4 and 5, 2019.

“The X-61A flew as predicted with no anomalies, achieving all test objectives that relate to the operational system,” the company said in a statement. “At the end of the mission, the engine was shut down and a drogue chute successfully deployed to terminate flight.”

However, the Gremlin was lost during the ground recovery sequence “due to a failure to extract the main chute,” Dynetics said. The company still has four other drones available for testing.

Initiated in 2015, the Gremlin program is intended to yield drones that fly in formation and work in tandem to accomplish pre-assigned missions, like sharing information and coordinate intelligence, surveillance, and reconnaissance information in contested airspace.

Once their mission is complete, the Gremlin is designed to be recovered from a C-130 with a mechanical arm extended from the aircraft's rear cargo ramp, a tool that Dynetics deployed but did not completely test during the maiden flight in November.

By the conclusion of the program, Dynetics hopes to conduct a final flight test that would demonstrate the ability to recover four Gremlins drones in under 30 minutes.

“This flight marks a historic milestone for Dynetics and the Gremlins program,” Tim Keeter, Dynetics Gremlins program manager, said in a statement. “The GAV flew beautifully and our command and control system kept us in total control of the GAV for the entire flight.”

I've said it once and I'll say it again: if DARPA's Gremlin effort isn't the real-world version of the Protoss carrier from StarCraft, I don't know what is.