The Air Force's plans to conduct flight tests for the Defense Advanced Research Projects Agency's air-launched and recoverable X-61A Gremlin Unmanned Aerial System are facing major delays due to the damage to China Lake, according to Gremlin manufacturer Dynetics 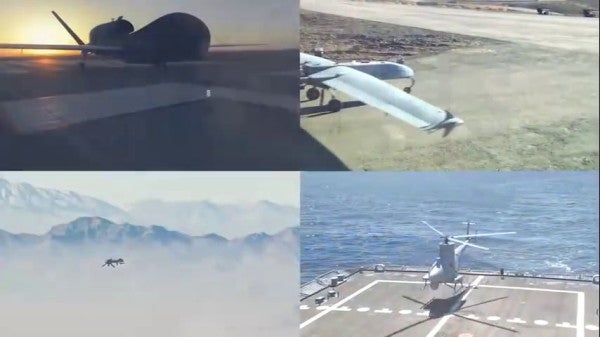 The series of earthquakes that rocked Naval Air Weapons Station China Lake in California on July 4 and 5 of this year will
end up costing the service more than $5 billion to return the essential weapons and aircraft testing facility to mission capable status.

Now it looks like those quakes have foisted a new cost on another service: critical testing time for a mothership-deployed swarm system eerily
reminiscent of those damn Protoss carriers from StarCraft.

The War Zone, which
first publicized that $5 billion reconstruction cost back in August, now reports that the Air Force's plans to conduct flight tests for the Defense Advanced Research Projects Agency's air-launched and recoverable X-61A Gremlin Unmanned Aerial Systems are facing signifiicant delays due to the damage to China Lake, according to Gremlin manufacturer Dynetics.

“It's limited range access. They've got a lot of damage that's been done,” Tim Keeter, Dynetics program manager for the Gremlin UAS,
said of the damage China Lake in a recent interview in Air Force Magazine. “They've got a lot of things to take care of in terms of infrastructure before they can support a flight test … like this.”

Flight Global, which first reported news of the delayed Gremlin testing in September 2019, noted that Dynetics is “ready to demonstrate the aircraft” by deploying the drones from the wing pylons of Air Force C-130 Hercules recovering them with a mechanical arm extended from the aircraft's rear cargo ramp.

Unfortunately, the July earthquakes “broke a critical piece of testing equipment, called the flight termination system,” as Flight Global reports. “This ground equipment is needed to terminate a flight demonstration that goes awry.” (I highly recommend this analysis from The War Zone for a more extensive look at the quake damage at China Lake)

A map showing the approximate epicenters of various earthquakes and aftershocks that rocked China Lake between July 4 and 5, 2019, as well as the locations of various key facilities.(U.S. Air Force via The War Zone)

While Dynetics stated that the Air Force may relocate several of DARPA's planned Gremlin testing phases to the Army's Dugway Proving Ground in Utah, it's unclear when new testing might actually take place, although Keeter
toldAir Force Magazine that the renewed tests might take place as soon as “by the end of the year”

Either way, the delay is an unequivocal bummer for a fascinating system that's been in the works since 2015. The Gremlins are designed to fly in formation and work in tandem to
share information and coordinate intelligence, surveillance, and reconnaissance taskings in contested airspace. Indeed, a swarm of Gremlins could forward-deploy and feed data to F-35 Lighting II aircraft to enhance strike packages and provide support to ground forces downrange.