A source described as a "security advisor" to Abu Bakr al-Baghdadi reportedly stole a pair of the terror mastermind's drawers about three months ago in order to prove he was being truthful to U.S. intelligence, according to NBC News. 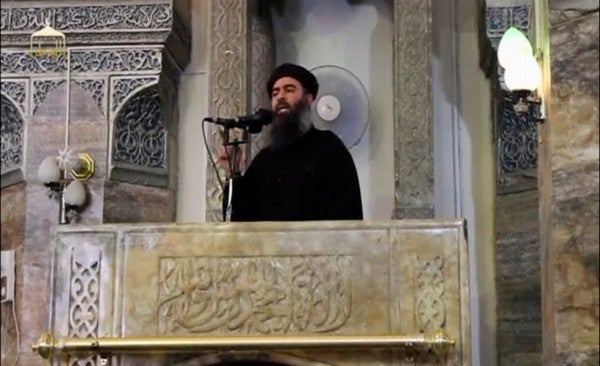 A source described as a “security advisor” to Abu Bakr al-Baghdadi reportedly stole a pair of the terror mastermind's drawers about three months ago in order to prove he was being truthful to U.S. intelligence, according to NBC News.

The informant stole Baghdadi's dirty undies as well as a blood sample, which was obtained about a month ago, NBC News reported. Both samples got positive matches for al-Baghdadi, who likely had some biometric information already on file from his time as a detainee guarded by U.S. forces in Iraq.

Similarly, the CIA organized a fake vaccination drive in Pakistan in order to get blood samples on the Bin Laden family, which helped to positively identify Osama Bin Laden before Navy SEALs raided his compound in 2011.

The news of the underwear caper came from SDF Gen. Mazloum Abdi, who told NBC News the source also offered a full layout of the Baghdadi compound and revealed the numbers of guards present.

Dozens of members with Army Delta Force and Rangers conducted a successful raid on Baghdadi's compound on Saturday evening “after receiving actionable intelligence” of the ISIS leader's whereabouts, Newsweek reported.

“The United States — more than any nation in the world — possesses the power and the will to hunt to the ends of the Earth those who wish to bring harm to the American people,” Defense Secretary Mark Esper said a Pentagon news conference Monday. “Saturday's operation is just one example of the determination and great skill of the U.S. military.”

Staged from the Iraqi city of Erbil and inserted with a cadre of six helicopters, the team targeted a compound in the Idlib province that had previously been under surveillance, engaging in what Newsweek characterized as a “brief firefight” during which al-Baghdadi detonated a suicide vest during the raid, killing himself and three children.

“The thug who tried so hard to intimidate others spent his last moments in utter fear, panic and dread, terrified of the American forces coming down on him,” Trump said on Sunday.

No U.S. military personnel were injured in the raid with the exception of a military working dog, who has since recovered. Trump later tweeted a photo of the dog but said its name still remained classified.

“The assault force was engaged by small arms fire, and the threats were quickly eliminated,” said Army Gen. Mark A. Milley, the chairman of the Joint Chiefs of Staff. “Our forces isolated the compound and protected all of the noncombatants.”