"If you don’t have the right training, the Arctic environment will kill you." 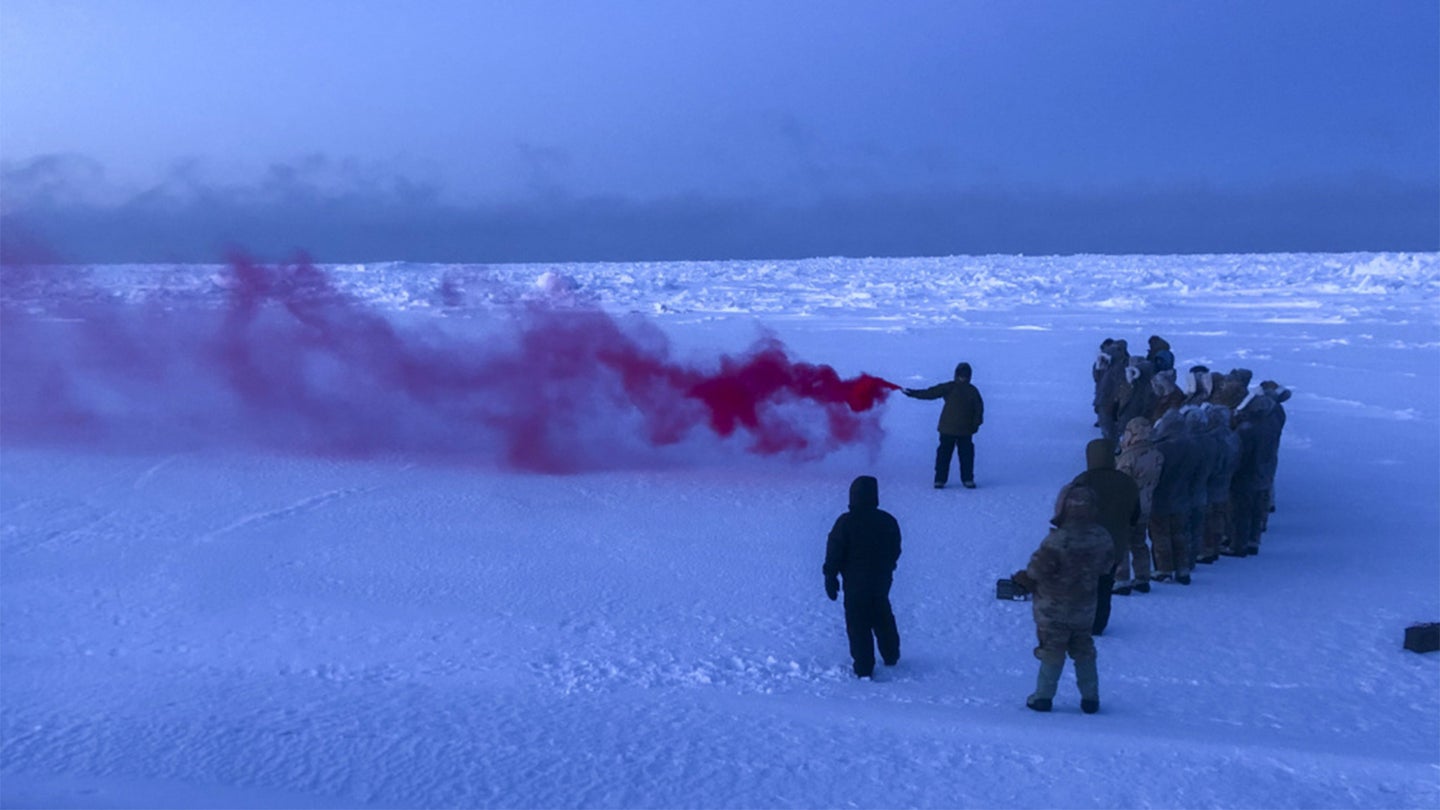 Air Force Staff Sgt. Samuel Ley, a 66th Training Squadron, Detachment 1 survival, evasion, resistance and escape (SERE) specialist, demonstrates how to use an MK-124 smoke and illumination signal on the Chukchi Sea Jan. 13, 2021. The MK-124 is a smoke and illumination flare used to signal search and rescue personnel in the event of an emergency or extraction situation. (Air Force photo / Maj. Tyler Williams).
SHARE

If you thought your winter was bad, just spend a week at the so-called Cool School, the Air Force’s frigid arctic survival school that is designed to show service members how to get through some of the harshest conditions on the planet.

Located north of the Arctic Circle, near the northernmost point of Alaska, the school, formally known as S-V81-C Barren Land Arctic Survival training, contends with wind gusts as high as 50 miles per hour, wind chills dropping to minus 60 degrees Fahrenheit, and constant near-darkness since the sun does not rise above the horizon for 65 consecutive days in the winter.

In those conditions, students learn how to build snow caves and igloos; signal for rescue; and learn from local indigenous people how to find food and stay healthy. The students themselves are survival, evasion, resistance, and escape (SERE) specialists, who are already trained to survive coastal, desert, and tropical biomes. Once they complete arctic training, they are expected to take their hard-won lessons out to teach other Air Force units.

The school churned out 44 graduates in two week-long classes from Jan. 9 to 23 this year. The training occurs as the Air Force and the military, in general, prepare for a possible fight over resources in the Arctic as global warming carves new trade routes out of the ice.

Having spent just one miserable night backpacking in West Virginia during winter 14 years ago, I don’t envy the airmen preparing to fight wars in infinitely colder climes. But at least they are learning from the best of the best: namely, the local folks who’ve lived in the Arctic circle for millennia.

“Our students have a unique opportunity to learn from the indigenous people, so they can come to a better understanding of the cultural influences that enabled them to survive in such a harsh region for thousands of years,” said Air Force Maj. Tyler Williams, the 66th TRS, Detachment 1 commander. “Before all of this modern equipment, it was the cultural values and practices that allowed them to thrive in this region.”

Though the press release does not specify which specific indigenous people to whom the Air Force owes these lessons, it does state that the training took place near Utqiaġvik Alaska, a city of about 4,400 people that is the northernmost American city and one of the northernmost public communities in the world.

According to the city website, 61 percent of Utqiaġvik residents are Iñupiat Eskimo whose ancestors first settled there some time between 500 and 900 BCE. Many of the residents continue to hunt and fish for much of their food, a skill which would come in handy for airmen who find themselves stranded in the area. However, airmen also have to have some cultural sensitivity if they expect to make any headway.

“There’s a lot of people who live across the Arctic,” Wright said. “Students have to understand that they might not be picked up by American forces and they may not even be military.”

Williams said the trained SERE specialists will pass their knowledge on to aircrews throughout the Air Force to prepare them for the Arctic.

“It doesn’t matter if you’ve got the best equipment or aircraft in the world,” he said. “If you don’t have the right training, the Arctic environment will kill you.”

Featured Image: Air Force Staff Sgt. Samuel Ley, a 66th Training Squadron, Detachment 1 survival, evasion, resistance and escape (SERE) specialist, demonstrates how to use an MK-124 smoke and illumination signal on the Chukchi Sea Jan. 13, 2021. The MK-124 is a smoke and illumination flare used to signal search and rescue personnel in the event of an emergency or extraction situation. (Air Force photo / Maj. Tyler Williams)

Related: Why this Air Force squadron is like the Night’s Watch from ‘Game of Thrones’