Ralph Lauren’s Combat Chic Sweater Is Sure To Turn Heads, And Give Your Sgt Maj An Aneurysm

If you served in the military, especially in the Marine Corps, then that logo looks awfully familiar. 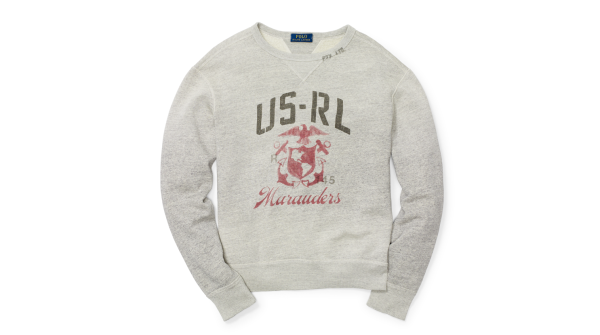 There’s a lot to be said about “tacticool” attire, trinkets, and gizmos. So much so that I’ve dedicated an embarrassing amount of time to writing silly posts on bespoke tactical vests, combat kicks, overpriced dress blue knockoffs, $30 reflective belts, and so much more.

And it’s time for another.

This Fleece Graphic Sweatshirt from Ralph Lauren was originally priced at $125, but is now just $34.99. Who can believe it? Now, if you’re looking at that and thinking “hmm, there’s something familiar about this,” you’re not alone.

Originally surfaced on Twitter by The Warax, along with a number of other mil-inspired items, the sweater features a logo that’s visually similar to the Marine Corps’ Eagle, Globe, and Anchor emblem. However, when reached for comment, the Marine Corps Trademark Licensing Office could not confirm at this time whether or not the logo violated the service’s existing trademarks — which are extensive, and were the subject of a previous Task & Purpose article.

The designer’s site doesn’t include any additional information on where the inspiration came from, nor does it say it who Ralph Lauren’s Marauders were, though some Twitter users have speculated:

Weren’t the Ralph Lauren Marauders a suicide squad cobbled together from the NYC fashion scene in 1942 with one mission — kill or capture Hugo Boss before the runway show for his 1943 Nazi collection?

While these items are a source of amusement for most, and the cause of vein-popping rage for a few, clothing companies have been making bank on military-inspired swag for decades, and they’re not going to stop anytime soon. And why should they? In fact, I say we flip the script: It’s time some active duty service-members shell out outrageous sums of money for knock-off military swag, just to see what happens when they sport it on base.

JUST IN: i will crowdfund matching United States Ralph Laurencorps PT uniforms for any active duty Marine unit willing to surprise their base sergeant major during a division run. https://t.co/amEyL9aiqt