After weeks of the U.S. military and veterans community melting down over that viral dino puppet reenlistment video, Air Force... 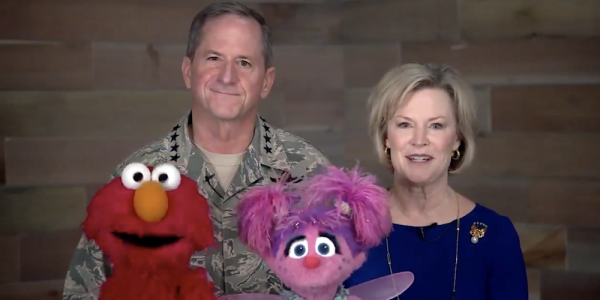 After weeks of the U.S. military and veterans community melting down over that viral dino puppet reenlistment video, Air Force Chief of Staff Gen. David Goldfein decided it would be a great idea to drop his own puppet video featuring Elmo and Abby from Sesame Street on Twitter to mark the end of April's Month of the Military Child program.

Dawn & I wanted to honor #MilKids in a special way for the #MonthoftheMilitaryChild, so we asked @Elmo & @AbbyCadabbySST from @SesameStreet to help us send them a message. Check it out! And, visit https://t.co/GjqKBvv6Ma for resources. #KidsServeToopic.twitter.com/WXRwI7x3ku

The purpose of the video, according to Goldfein? To provide “a quick shoutout to all the military kids and families and thank them for all the support they give to their loved ones who serve.”

This video, an annual tradition in the Air Force, would be absolutely adorable — if the Tennessee Air National Guard hadn't recently decided to nuke the careers of three dedicated airmen for doing essentially the exact same thing

Indeed, ousted Col. Kevin “Bly” Blaser told Military.com on April 25 that the whole reason he participated in the controversial dino puppet reenlistment video that ended his career was that Master Sgt. Robin Brown, in the Air Force for 17 years, wanted to use her reenlistment ceremony “to make a video for her young children to understand the significance of what ‘mom’ was doing.”

“I was very well aware she’s a single mom with three young ones at home,” Blaser said, noting that Brown also wanted to honor the Month of the Military Child. “We should have done a new one, and a separate video for .”

Plenty of other observers agree:

Dear General,
Muppets are ok but puppets aren't?
Mmmmm.
Ending careers for something a parent did to let her kids be a part of her reenlistment is harsh.
Can the USAF not say oops we screwed up?

In other news, the Air Force's public affairs reset appears to be going as swimmingly as we expected.