The Story Behind The A-10’s Iconic War Paint

From its distinctive “Brrrrrt” that spells out death and destruction for America’s enemies, to the iconic paint job emblazoned on... 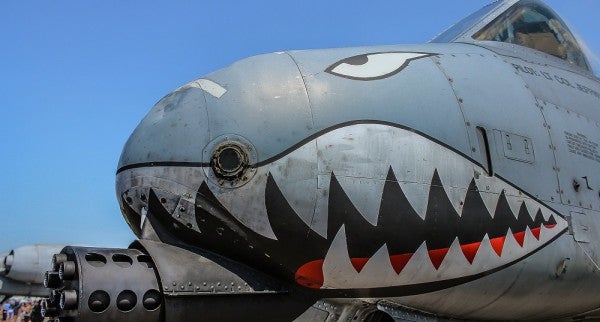 From its distinctive “Brrrrrt” that spells out death and destruction for America’s enemies, to the iconic paint job emblazoned on its nose, the A-10 Thunderbolt is an American military icon.

Affectionately referred to as the Warthog, it was designed in the 1970s from the ground up to excel at close-air support, and with its massive 30mm GAU-8 Avenger cannon — which is the size of a small car — this beast has the power to decimate anything on the ground.

It looks real good doing it, too.

Beyond the fact that the A-10 is literally a flying cannon, what sets it apart is its nose art — it’s not a particularly pretty aircraft; in fact, it’s ugly. Hell, it’s downright ferocious. This face is the last thing anyone wants to see before thousands of depleted-uranium rounds come roaring down on top of them.

The aircraft’s nose art is part of a dying tradition that dates back to World War II when fighters and bombers were painted with pin-up girls, sharks teeth, and unit mottos. The trend fell off during the Cold War when top military officials imposed stricter rules on what could and could not be featured on military aircraft, according to War Is Boring. This, combined with a shift toward standardizing low-visibility paint schemes, ended an era of flashy paint jobs on fighter aircraft.

“What was once a great morale booster for many in and out of uniform during the war could now only be found fading away on the sides of aircraft in boneyards around the country,” wrote aviation journalist Nicholas Veronico in “Boneyard Nose Art: U.S. Military Aircraft Markings and Artwork,” according to War Is Boring.

Today, the rules regarding nose art remain firmly in place, mandating that the artwork must be “distinctive, symbolic, gender neutral, intended to enhance unit pride, designed in good taste,” and follow trademark and copyright laws according to a 2015 Air Force memo.

The Warthog continues to carry on this tradition, at least for now. Plans for the tank-busting aircraft to be scrapped were put temporarily on hold while it kicks the hell out of the Islamic State in Iraq and Syria.

An A-10 Warthog prepares to take off from Al Asad Air Base to provide close air support to ground troops in Iraq. The 438th Air Expeditionary Group A-10 jets perform 10 sorties daily.

Many photos of A-10s show them emblazoned with tiger-shark teeth; however, this specific design is actually reserved for the 23rd Fighter Group, nicknamed the “Flying Tigers.” The paint job is a homage to the flying P-40 Warhawks in World War II.

Other A-10s are emblazoned with viper fangs or jutting warthog tusks. But one thing is certain, an A-10 will always have teeth.

“I don't care if the plane goes to the bone yard next week. If it sits there for the next 30 years it'll have teeth,” Senior Airman Spencer Stringer, a structural maintenance technician who painted the teeth on this beast, said in an Air Force press release.

Thankfully this old warhorse, and its nose art, isn’t heading to the scrapyard just yet.