Capt. Sonny Hernandez, an Air Force Reserve chaplain, believes that Christians who tolerate the practice of other religions are worshipping... 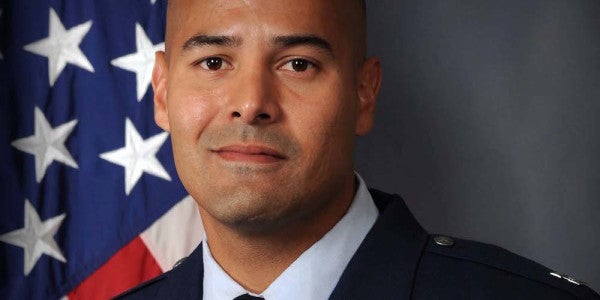 Capt. Sonny Hernandez, an Air Force Reserve chaplain, believes that Christians who tolerate the practice of other religions are worshipping Satan, according to a blog post he for penned for Barbwire.com on Sept. 12.

“Christian service members who openly profess and support the rights of Muslims, Buddhists, and all other anti-Christian worldviews to practice their religions — because the language in the Constitution permits — are grossly in error, and deceived,” Hernandez wrote.

Hernandez, who serves in the 445th Airlift Wing at Wright-Patterson Air Force Base in Ohio and was his unit’s Company Grade Officer of the Quarter in 2015, says heaven does not have a place for service members who put the Constitution — particularly the establishment clause of the First Amendment — above a Christian God. He believes it is his duty to make sure that chaplains across the military advise Christian service members on their duty not to tolerate other religions.

“Counterfeit Christians in the Armed Forces will appeal to the Constitution, and not Christ,” he wrote.

The First Amendment states that “Congress shall make no law respecting an establishment of religion, or prohibiting the free exercise thereof.” Hernandez says that clause gives Christians the right to bag openly on other beliefs they deem heretical.

“According to the First Amendment, there is freedom of religion, and freedom of speech,” Hernandez writes. “Christians in the Armed Forces should feel free to espouse and practice their convictions, and even deny participating, or accommodating a religion or practice that would cause them to sin—regardless if it offends others or not.”

(Left to right), Staff Sgt. Sonny Hernandez, of the 445th Security Forces Squadron, located at Wright Patterson Air Force Base, Ohio, Tech. Sgt. Sam A. Ruiz, of the 119th Wing Security Forces Squadron, North Dakota Air National Guard and Kavuma Richard with KBR Service Contracting from Uganda, Africa take a moment to pose for a picture after competing in a 5K race in Iraq. The three individuals are planning to compete in the Fargo Marathon on May 9 from Iraq.

Hernandez’s proselytizing is well-known; the Military Religious Freedom Foundation has repeatedly asked the Department of Defense inspector general to investigate Hernandez, according to Newsweek. And the organization’s founder believes that Hernandez bombast has grown since President Donald Trump took office.

“America’s military members look to the president for direction and inspiration,” Michael Weinstein, an Air Force Academy alumnus and MRFF founder, told Newsweek. “Trump’s statements and actions have fully endorsed and validated this unbridled tidal wave of fundamentalist Christian persecution, which is now more inextricably intertwined into the very fabric of our Department of Defense than ever before.”

“With the advent of Trump as the commander in chief of our armed forces, MRFF has experienced a massive influx of new military and civilian personnel complaints of religion-based prejudice and bigotry, most of them coming from non-fundamentalist Christians being persecuted by their military superiors for not being ‘Christian enough,’” Weinstein said.

For his part, Hernandez has written that MRFF is “actually a ‘freedom from religion’ foundation that harasses Christians.” Recent estimates suggest that about two-thirds of all service members identify as Christian.